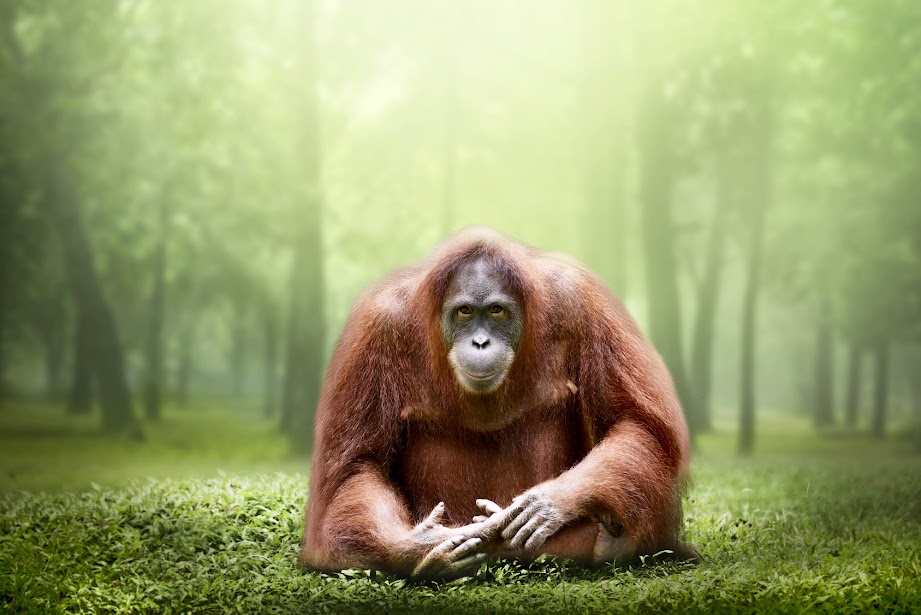 An ecosystem is the natural balance between organisms, plants, and animals in a particular place. Certain species of wildlife depend on particular species of plants, insects and organisms for survival. Even a small patch of forest can have a complete ecosystem of its own. So can a rivulet, a pond, a lake and sea. In any given landscape, there can be numerous ecosystems. This is what is called biodiversity.

Never before has biodiversity faced such destructive forces as it has in recent times from human activities. Almost half of what took millions of years to take shape and evolve has been destroyed by man in a very short time.

Man-made pollution is one of the main threats to wildlife habitat. Humans have regarded the air, water, and soil as waste receptacles, giving little consideration to the ecological consequences of pollution. Wildlife populations are constantly confronted with a massive array of pollutants released into the environment.

In the last 80 years, the world chemical output has grown 500-fold, contaminating entire landscapes, accumulating in bodies of animals and plants, and altering and disrupting the DNA of wildlife in those places. Out in the seas and oceans, destruction caused to marine life cannot be fathomed. Trash washed down rivers and city streets, mountains of plastic, garbage and debris, are finding their way into the oceans by the ton on a daily basis – causing massive disruption in coastal ecosystems. Pollution from industrial emissions, traffic and other commercial activities have eaten into the ozone layer and altered complete climatic patterns. Ecosystems that have survived and evolved through the ages, dependent on climate and seasonal cycles, have been totally derailed.

These destructive human activities are causing massive extinctions. Up to 30% of mammal, bird and amphibian species are already threatened with extinction, including: 1 out of 4 mammals, 1 out of 8 birds, 1 out of 3 amphibians, and 6 out of 7 marine turtles. A third of reef-building corals are threatened with extinction. If global temperatures rise by more than 3.5°C, up to 70% of the world’s known species risk extinction. Extinction risks are outpacing conservation successes.

Thousands of synthetic chemicals are being released into the environment at alarming rates, altering the distribution of naturally occurring substances. Wild animals are facing conditions they have never experienced before. These alien conditions disrupt the delicate biological balance that has evolved over thousands of years.

Pollution is have detrimental effects on the health of wildlife. Synthetic chemicals, acid rain and oil are all toxic. Additional types of pollution harm wildlife in indirect ways, changing or destroying their habitats. Carbon dioxide is accumulating in the atmosphere, resulting in changes in climate and the distribution of habitats. The ozone layer is being damaged by chlorofluorocarbons, causing destruction from the effects of excessive ultraviolet radiation on wild animals and their food sources. Grasslands, marshes and canyons are being destroyed by solid waste landfills.

Acidic rivers and streams, resulting from acid rain, causes respiratory distress in fish. Clearer water from higher acid levels also results in temperature and light increases in the water, causing native fish to relocate to cooler and darker habitats. Amphibians have changed both physiologically and behaviorally due to air pollution. Ozone damages their immune systems.

Insects are especially susceptible to the dangers of air pollution. Air quality fluctuations can cause insects to relocate, affecting the plants and animals connected to them. Insects more resilient to air pollution digest organic waste less effectively, resulting in a buildup of organic waste when air pollution increases.

Metal smelters release toxic metals through tall smokestacks that have negative effects on wild animals. Pollutants cause environmental contamination both close to the source, and downwind of smelters.

Air pollution is damaging lung tissues of animals. Chlorofluorocarbons (CFCs) have damaged the ozone layer that protects the Earth from ultraviolet radiation. Ozone molecules near the ground damage wildlife lung tissues and reduces plant respiration by blocking openings in leaves. A plant not able to photosynthesize at a high rate due to inadequate respiration cannot grow. Holes in the ozone layer also cause skin cancer in wildlife.

Greenhouse gases from air pollution are warming the planet. Through photosynthesis, plants convert carbon dioxide into oxygen and use the carbon to grow. But the amount of carbon dioxide being released by human activities is much greater than plants can convert. Ice and frozen ground are melting near the Poles. As a result, habitats and resources are changing for plants and animals. Ocean warming and rising sea levels are affecting shallow marine environments, including coral reefs. Less rainfall, caused by global warming, is limiting water resources for plants and animals.

Air pollution is particularly hazardous to animals when in the form of acid rain. Acid rains kills fish by increasing water acidity. Rising pH (a measure of acidity) levels are destroying plants and trees.

Acid rain, primarily caused by sulfur and nitrogen released into the atmosphere from automobiles and the combustion of oil and coal, discharges toxic aluminum into water systems. Acid rain has numerous disastrous effects on ecosystems, especially aquatic ecosystems. pH levels are changed, killing many wild animals outright and throwing ecosystems completely out of balance.

Gravity draws acid rain towards water bodies in low areas. When the acidity in these water bodies increases, fish and other organisms lose their ability to survive and reproduce. Acid rain has already killed off fish populations in hundreds of lakes.

Water pollution is detrimental to wildlife. Frogs species are in decline. Water bodies polluted with nutrients are causing massive growths of toxic algae that are eaten by animals, resulting in diseases and deaths.

Monumental amounts of toxic metals are released into the air by industries and automobiles. These toxins settle to the ground and are then transported by fallen rain, along with pesticides. "Storm water runoff" is carried to local sewer systems, streams, rivers, lakes and oceans. It is one of the largest sources of toxic water pollution.

Oil spills result in the deaths of countless wild animals. Oil coats animal fur and feathers reducing their insulating properties, and exposes animals to deadly toxins. The long-term effects of oil spills are more subtle, but just as detrimental. Toxic chemicals on beaches, in the water, and in the food web results in anemia, decreased disease resistance, impaired reproduction, cancers, birth defects and neurological damage.

In coastal belts where human habitation concentration has grown the most in the past few decades, wanton garbage disposal, especially of plastic, has almost completely wiped out marine ecosystems within miles of the shores. Spectacular creatures such as whales and dolphins, that were once a common sight for beach goers, have been driven from their natural habitat into deep seas – having lost their centuries-old feeding grounds to pollutants.

In closeted water bodies like lakes, pollutants like oil, detergents, nitrogen and phosphate can create havoc in its ecosystems by stimulating growth of unwanted plants and choking the water of oxygen so essential to the survival of fish.

Pollution from animal agricultural is one of the biggest threats to wildlife. Pesticide usage in agriculture has jumped 26-fold in the last 50 years causing serious consequences for the environment. Lakes, streams, drains and groundwater have been contaminated to an extent that not only are they not fit for use, entire ecosystems around them have perished. Chemical runoff leaches into streams, waterways and groundwater. Fertilizers alter nutrient systems in waterways, creating explosive growths of algae that deplete oxygen in the water. Around 400 dead zones have already been created as a result.

Animal agriculture produces significantly more greenhouse gases than all of the traffic in the world combined. Spouting out huge percentages of carbon dioxide and nitrous oxide, the industry is leaving behind pollutants known to remain in the atmosphere for more than 100 years. Animal waste also produces toxic levels of methane and ammonia, which leads to climate change as well as acid rain. Cows alone produce approximately 120lbs of manure per day, resulting in about 150 billion gallons of methane each day. Unmanageable amounts of animal waste is collected in cesspools and is either sprayed on fields or left to sit. The toxic fumes from the pools are emitted into the air and harm the environment.

Littering causes the deaths of many wild animals. Toxic trash can be fatal. Entanglement in litter is a common threat. Tons of plastic litter finds its way into the oceans, washed off streets and blown from landfills. Animals often mistake litter for food and attempt to eat the litter, resulting in fatalities. Litter accumulates in giant patches. Some is transported by currents and washed onto shore. Trillions of other pieces of decomposing plastic create gigantic swirling garbage patches in the ocean.

We Must Act Now

Pollution, along with habitat loss and degradation, over-exploitation, unsustainable practices, and invasive alien species, are affecting biodiversity around the globe. The result is the massive destruction of ecosystems and a frightening reduction in biodiversity.

Earth's ecological system has been in balance for millions of years, but is now threatened by human activities. Current extinction rates are likely to result in collapses of ecosystems on a global scale.

Pollution has had devastating impacts on wildlife. Most types of pollution are not necessary, and others can be drastically reduced. Technology is available that can significantly reduce pollution. Reduced consumption of fossil fuels would also bring down emissions of toxic metals and acid rain. Shifting to plant-based, organic farming would eliminate the massive amounts of pollutants produced by the animal agriculture industry.

Awareness, creativity, and a willingness to modify our lifestyles will curtail threats that pollution causes to both wildlife and humans. You can help wildlife and ecosystems by supporting environmental groups that are fighting polluting practices, as well as by making your own conscious decisions regarding eating choices, waste management, harmful chemicals and irresponsible household products.