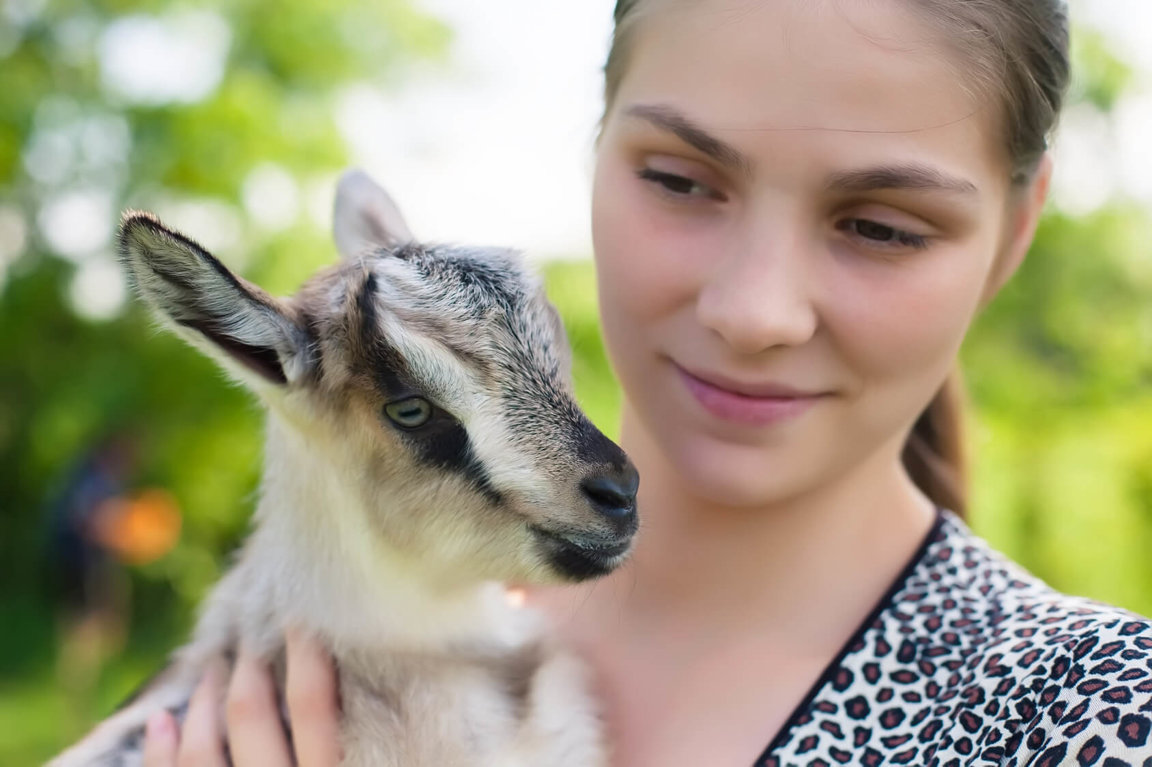 "Compassionate living" is a concept based on the belief that humans have a moral responsibility to treat animals with respect, and that the interests of humans and animals should be considered equally. This means that in any decision that could potentially affect the life of an animal, that particular animal's interests should not be dismissed simply because it is inconvenient for us to consider them.

Although it may not always be easy to determine accurately the best interests of an animal, we can safely assume that animals generally prefer to live, to be free from pain and to express their natural behaviors.

The failure of humans to consider an animal's needs/interests as equal to those of humans is an expression of prejudice called speciesism. Defenders of speciesism often argue that humans are superior to other species because of their greater intelligence. Taken to its logical extreme, this argument would imply that humans with higher I.Q. scores should have more rights than humans with lower I.Q. scores. However, we have developed the sensitivity to extend basic human rights to all humans, whether or not they meet any criteria for intelligence, capacity or potential. But animals are commonly experimented on without their consent, and even killed, if it suits human purposes. This gross inequality is what we are trying to address with the concept of "animal rights."

Another common assertion is that humans are superior to animals because we possess the capacity to understand morality, as well as the ability to determine right from wrong. Since some animals may lack these same abilities, it is argued that humans are not obligated to treat them in any particular way. However, if only those who are capable of making and understanding moral judgments were to be accorded basic human rights, than infants, young children, and the severely ill or mentally challenged would be excluded. It is equally logical to affirm that, since humans are the only ones who can make moral judgments, that it is our responsibility to do so on behalf of the animals.

All animals, including humans, have the ability to experience pleasure and pain. Unfortunately, humans have tended to inflict tremendous amounts of pain and suffering on animals without any consideration of how this affects the animals themselves. By making compassionate daily choices, you can help end widespread animal abuse and exploitation.

WHAT YOU CHOOSE TO WEAR

Fur: Each year more than 40 million animals are senselessly tortured and killed to satisfy the dictates of fashion. Wild-caught fur is obtained by setting traps or snares to capture fur-bearing animals. Once an animal is caught it may remain in the trap or snare for several days starving or slowly strangling. Farm-raised fur comes from animals kept in tiny, filthy cages, deprived of adequate protection from the elements. As a result, animals develop stereotypical behavior, including pacing, head bobbing, and self-mutilation. The techniques used to kill animals on fur farms include neck snapping or "popping", electrocution with a rod shoved into the anus and gassing or smothering.

Wool: Sheep raised for wool are subjected to a lifetime of cruel treatment. Lambs' tails are chopped off and males are castrated without anesthetic. In Australia, where 80% of all wool comes from, ranchers perform an operation called "mulesing" where huge strips of skin are carved off the backs of lambs' legs. This procedure is performed to produce scarred skin that won't harbor fly larvae, so that the rancher can spend less time caring for the sheep. The shearing of sheep can be a brutal, as workers are encouraged to shear as quickly as possible. As a result, an estimated one million Australian sheep die every year from exposure. Sheep that are no longer useful for their wool are sent to crowded feedlots and then transported to the slaughterhouse.

Leather: By-products of the beef industry are defined by the parts of the cow that are not consumed by humans. These include hooves, some organs, bones, and skin. Skin (leather) accounts for about half of the by-product of the beef industry. Like meat, leather is a product made from animals that experienced the horrors of factory farming, transport and slaughter. The leather industry uses some of the most dangerous substances to prepare leather, including formaldehyde, coal-tar derivatives, various oils and some cyanide-based dyes.

WHAT YOU CHOOSE FOR ENTERTAINMENT

Circus: Animals used in the circus spend the majority of the year imprisoned in small cages or on chains, traveling from show to show. The training endured by circus animals is almost always based on intimidation; trainers must break the spirit of the animals in order to control them. It is not uncommon for an elephant to be tied down and beaten for several days while being trained to perform, and tigers are chained to their pedestals with ropes around their necks to choke them down.

Rodeo: Horses and cows used in rodeos are abused with electrical prods, sharp spurs and "bucking straps" that pinch their sensitive flank area. During bucking events, horses and bulls may suffer broken legs or run into the sides of the arena causing serious injury and even death. During calf-roping events, a calf may reach a running speed of 27 miles per hour before being jerked by the neck to an abrupt stop by a lasso. This event has resulted in animals' punctured lungs, internal hemorrhaging, paralysis and broken necks.

Greyhound and Horse Racing: Once greyhounds begin their racing careers, they are kept in cages for about 22-1/2 hours a day. The cages are made of wire and are barely big enough for dogs to turn around. Dogs considered too slow to race are sold to research facilities or killed (20,000-25,000 each year) - very few are adopted. More racehorses are bred than can prove profitable on the racetrack. As a result, hundreds are sent to slaughter every year.

Zoos and Aquariums: While zoos and aquariums may appear to be educational and conservation-oriented, most are designed with the needs and desires of the visitors in mind, not the needs of the animals. Many animals in zoos and aquariums exhibit abnormal behavior as a result of being deprived of their natural environments and social structures. Some zoos and aquariums do rescue some animals and work to save endangered species, but most animals in zoos were either captured from the wild or bred in captivity for the purpose of public display, not species protection. The vast majority of captive-bred animals will never be returned to the wild. When the facility breeds too many animals they become "surplus" and often are sold to laboratories, traveling shows, shooting ranches, or to private individuals unqualified to care for them.

WHAT YOU CHOOSE TO EAT

Every year billions of animals are raised and killed for human consumption. Unlike the family farms of the past, today's factory farms are high-revenue, high-production entities. On a factory farm, animals are confined to extremely small spaces, which allows farmers to concentrate on maximizing production. Because this type of overcrowding breeds disease, animals are routinely fed antibiotics and sprayed with pesticides. They are also fed growth hormones to enhance productivity. These chemicals, antibiotics and hormones are passed on to the environment, as well as to consumers of meat and dairy products.

Pork: In the United States each year more than 115 million pigs are raised on factory farms and slaughtered for human consumption. Factory-farmed pigs are raised in crowded pens which are enclosed inside huge barns. The air in these barns is filled with eye and lung burning ammonia created by urine and fecal waste collected below the floors. Breeding sows (or "animal production units") spend their lives in metal crates so small that they cannot turn around. Denied adequate space and freedom of movement, these sows often develop stereotypical behavior, repetitive movement such as head bobbing, jaw smacking, and rail biting. At the slaughterhouse, pigs are stunned (often inadequately), hung upside down before their throats are cut, and then bled to death. If workers fail to kill a pig with the knife, that pig is carried on the conveyer belt to the next station, the scalding tank, where he or she may be boiled alive.

Chicken: Every year approximately 8.785 billion chickens are raised and slaughtered for human consumption in the United States, most on factory farms. Crowded and unable to express natural behavior, chickens begin to peck excessively at each other. Rather than solve this problem by providing adequate space for the chickens, factory farmers "debeak" them, a painful procedure where the bird's sensitive upper beak is sliced off with a hot metal blade. Chickens raised for consumption have been genetically altered to grow abnormally large. As a result, many broiler chickens' bones are unable to support the weight of their muscle tissue, which causes them to hobble in pain or become crippled. At the slaughterhouse, chickens while still fully conscious are hung upside down by their feet and attached to a moving rail. Birds missed by the mechanical neck-slicing blade and boiled alive are called "redskins".

Eggs: There are more than 459 million egg-laying hens in the U.S. Of these, 97% are confined to "battery" cages - tiny wire boxes roughly 16 by 18 inches wide. Five or six birds are crammed into each cage. Battery hens are forced to produce 10 times more eggs than they would naturally. When egg production slows, factory farmers use a method called "forced molting" to shock the hens into losing their feathers, which causes them to begin a premature laying cycle. "Forced molting" involves starving the hens and denying them water for several days' time, during which many hens die. To keep hens from pecking each other in their crowded cages, factory farmers "debeak" them. Male chicks, considered by-products of laying hen production, are either tossed into plastic bags to suffocate slowly, or ground into animal feed while still alive.

Beef: About 41.8 million beef cattle are slaughtered annually in the United States. For identification purposes, cattle are either branded with hot irons or "wattled," a process in which a chunk of flesh from under the cow's neck is cut out. Raised on the range or in feed lots, cattle when large enough are crammed into metal trucks and taken to slaughter. On the way to slaughter, these cattle may travel for hours in sweltering temperatures with no access to water. Animals unable to stand due to broken legs or illness are called "downers" by the meat industry. Downers are electrically prodded or dragged with chains to the slaughterhouse, or left outside, without food or water, to die.

Milk: About half of the 10 million milking cows in the U.S. are kept in confinement on factory farms. Dairy cows are forced to produce 10-20 times the amount of milk they would naturally need for their calves. This intensive production of milk is extremely stressful, and as a result many dairy cattle "burn out" at a much younger age than their normal life expectancy, and up to 33% suffer painful udder infections. To continue milk production, a cow must bear a calf each year. Although calves elsewhere stay with their mothers for a year or more, on the dairy factory farm they are immediately removed from their mothers so that milk can be sold for human consumption. Calves are sold to the beef or veal industry or become replacements for "burned out" dairy cows.

WHAT PRODUCTS YOU CHOOSE