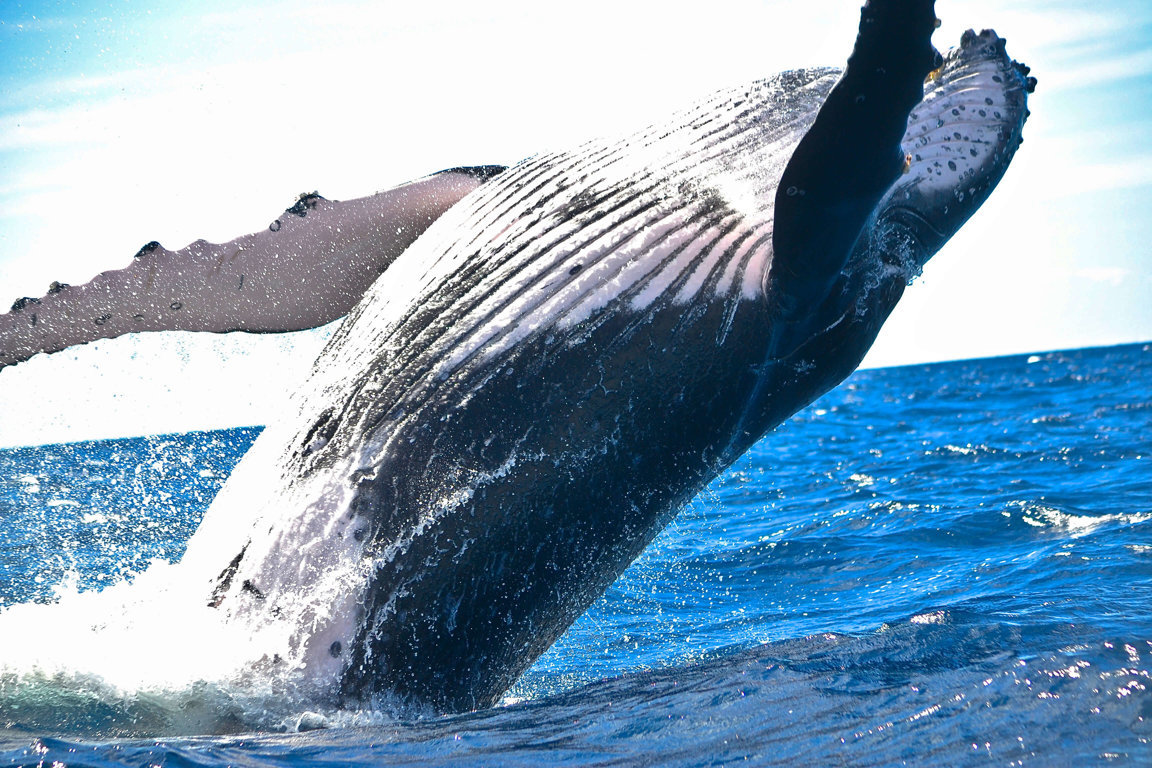 Whales are among the most fascinating and talked about creatures on the planet. These mammals are not just the largest creatures of the ocean, but of the Earth. Even the smallest species, the dwarf sperm whale, is 8.5 feet long and can weigh at least 135 kilograms. The biggest, the blue whale, is over a 100 feet in length and can weigh as much as 210 tons.

The whale has a thick layer of fat that makes it immune to cold ocean waters. These submarine-like creatures are found roaming all the oceans and seas. Since the whales' habitat spans such a vast area of the globe, their diets can differ dramatically. The most common diet is fish, plankton, shrimp, crabs, larvae, krill and squid. The killer whale preys on large animals like sea lions, walruses, seals, sharks, seabirds and even large whales for its food.

Whales come up to the ocean surface intermittently to take in air and spew out a long fountain of water from a duct right on top of their heads. While many whales have sharp, uniformed rows of teeth, the baleen whales have a bristle-like formation in place of teeth that helps them sift food from water. Whales communicate with each other by way of mysterious, elongated squeaks than can travel miles through the waters.

The whale, like many other endangered species, is not immune to the ravages of man. From 1900 to the 1970's, as many as 350,000 whales were hunted down and killed in the oceans of the Southern Hemisphere alone. In a bloody year of 1931, a staggering 29,000 blue whales were butchered. As a result, they are among the most endangered species and just 10,000-25,000 of them remain today. The North Atlantic right whale, especially, is under the greatest threat of extinction with just 300 of the creatures left.

Rapidly rising human activity in marine environments like harbors, landfills, shipping channels, and fish farming (aquaculture) is resulting in the loss of whale habitat. Recreation in the form of heightened boat traffic, ocean liners and resort development is driving the whales further away from shores where they find their natural food.

Warm ocean temperatures, along with melting of ice in the polar regions, pose more threats for the whales. Sea ice that produces krill is a major food source for the whales and could vanish with the water becoming warmer. Melting ice could destroy 30% of the Antarctic minke whales' habitat and could push the humpback whales' feeding zones 300-500 kilometers away into the seas.

Many whale species specially feed on herring, cod and mackerel. The huge commercial demand for these fish has led to their over-fishing, which in turn has robbed the whales of one of their main diets.

The whale is itself a delicacy and its body oils and parts find commercial use in quite a few parts of the world. In fact, whaling is a huge industry in countries like Japan and Norway. Norway is now the world’s leading whaling nation. The Norwegian government is funding a number of projects, both to promote domestic sales of whale products and to develop alternative commercial products derived from whales, including dietary supplements, medicines, and cosmetics.

Hundreds of thousands of whales were killed by the Japanese until commercial whaling was banned in 1986. But that has not stopped Japanese whaling fleets from killing 2,000 of the mammals every year since under the guise of "scientific whaling" for the bogus purpose of "scientific research". Why one has to kill whales to understand them simply confounds logic.

Exploration of offshore oil and gas is another threat to whale habitats. Studies by scientists have shown that oil finds, and subsequent drilling, have completely destroyed habitats of whales. Noise emanating from the equipment used for underwater seismic surveys have hugely impeded on the whales' delicate sense of sound and affected the communication among the creatures. There were instances in the early 1990's where eardrums of humpback whales off the coast of Newfoundland, Canada were found ruptured by sounds of undersea blasts used for exploration activities. Pollutants emanating from toxic chemicals used by the oil and gas industry is another serious hazard to whale health.

The over-fishing of fish species has led to a slowdown in the commercial fishing industry in recent times. The cause for decline in supplies was laid on whales. The culling of the mammals was promoted to revive the fortunes of the fishing industry, but conservationists exposed the fallacy of the claim that whales are to blame. Unsustainable fish harvesting and other human actions are the true culprits of reduced fish populations.

Although most whale species have been protected by stringent laws, man has found indirect ways of hunting down the creatures. While the levels of killing have dropped drastically over the years owing to endeavors of conservationists, whale-lovers and concerned authorities, the recovery of their populations will remain a huge challenge. For instance, the population of humpback whales, which was close to 1.5 million in the beginning of the 19th century, is only 20,000 now.