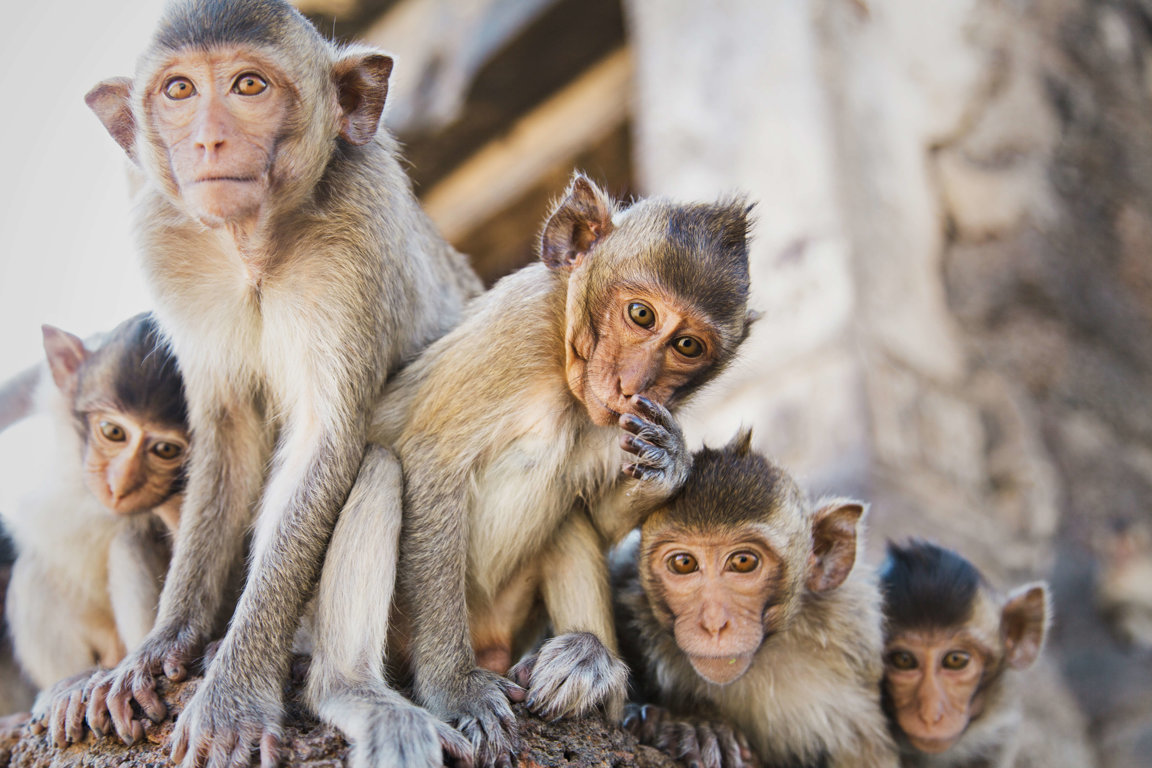 Monkeys have long been a common sight in temples and tourist destinations around the world. These intelligent animals once stayed away from urban hubs, restricting themselves to the fringes of big cities. But deforestation, animal agriculture, industrialization and fast expanding cities is reducing monkey habitat at an alarming rate. As a result, many species of monkeys are invading cities for food, shelter and water.
Many monkeys have long taken to temples, where they are often protected and fed. From these temples they radiate out to nearby forests. But urbanization has invaded temple areas, bringing the city to the monkeys.
As natural monkey habitats are continuously destroyed, monkeys are loosing their fear of humans. In search of new food sources, they raid farms, beg for food, and steal from homes and businesses. Urban areas offer monkeys easy access to shelter, food, water and large trees, causing population explosions. Telephone and electric wires give them easy access throughout the urban jungles.
Monkeys are now as plentiful as squirrels in many Asian cities. They hang out in train stations, beg at the side of roads, dig through trash cans, and steal food from humans.
Cows, stray dogs and cats have roamed the streets of the capital city of India, New Delhi, for centuries. Now, monkeys have taken over. There are tens of thousands of rhesus macaques skirting rooftops of buildings, darting through work places, raiding kitchens, scattering files and attacking workers. Instances of human-monkey conflicts include monkeys biting people, snatching foodstuffs, picking pockets, and even drunken monkeys misbehaving. Monkeys have spread to other Indian cities of northern states like Madhya Pradesh and Rajasthan. Langurs, another species of monkey, are now seen on the rooftops of Jaipur, the capital city of Rajasthan. Ironically, the langur was brought in to scare off the rhesus macaques.
While the rhesus macaques are having a free run of many Indian and Asian cities, the baboons have their sights set on the affluent neighborhoods of Cape Town, South Africa. Man and baboon have co-existed in the Western Cape for centuries, but tolerance for the creature seem to be running thin. Loss of habitat from development and urbanization is turning this once-friendly creature into an aggressive one. Baboons are breaking into glitzy estates on the Cape, raiding kitchens for food, rummaging into garbage cans and stealing whatever they think may be of use to them. Even restaurants haven't been spared.
Many urban communities feed the monkeys, often compounding the problem. The monkeys quickly loose their fear of humans and become dependent on human handouts. Thousands of monkeys went on a rampage in northern Thailand when the council ran out of rice for the monkeys after a drought. Shops, homes and restaurants were invaded by gangs of hungry monkeys.
Snow monkeys in Japan raid farms, invade towns and break into homes and businesses to steal food. Forestry has reduced their wild food sources, leaving the monkeys little choice.
While monkeys are not native to the US, vervet monkeys have made a tiny patch of forest near the Fort Lauderdale/Hollywood International Airport their home. They have survived in the area for generations. Silver River, in central Florida, is home to rhesus macaques that were introduced to the central Florida wetlands to drum up tourism. They have lived there for decades and are now moving as far north as Jacksonville and as far south as Orlando.
Finding Solutions
Attempts to reduce urban monkey populations have ranged from outright elimination, to forced migration and awareness campaigns not to feed monkeys.
Many farmers have resorted to shooting monkeys to save their crops. A more humane attempt to avoid monkey damage is switching from fruit and vegetable crops to growing crops less likely to attract monkeys.
Culling methods are not only inhumane, but also ineffective. New monkeys soon move in from surrounding areas. Their numbers swell quickly to match the original populations. Culling also results in the monkeys becoming more aggressive.
Capturing city monkeys in cages, and keeping them in captivity before release, causes extreme stress to the animals. Relocation of monkeys only results in new troops entering the area. Diseases can also be spread by monkeys from one area to another.
Large-scale sterilization of monkeys has yet to be attempted. At least 1/3rd of the population needs to be sterilized to arrest the rate of population growth. Capturing enough monkeys to be effective is both challenging and expensive. Oral contraceptives for monkeys, that can be administered through food, are in the works.
In South Africa, "virtual fences" on the perimeters of cities are being created. These virtual fences are a line of speakers that emit sounds of predatory beasts, like the lion, to keep baboons at bay. Whether that will be a long term solution is a matter of conjecture.
Conservationists are proposing filling monkey habitat with food sufficient enough to dissuade them from venturing into cities. Some areas have proposed mass planting of trees to create green islands to provide habitation to monkeys.
To help save monkey and other wildlife habitats, humans must also shift from animal based agriculture to plant based farming. Expanding animal farming is the leading cause of deforestation, resulting in ever-increasing habitat loss. Animal agriculture takes up over 40% of the planet. 56 million acres of land are used to feed factory farmed animals, while only 4 million acres produce plants for human consumption. It takes 20 times less land to feed someone on a plant based diet than it does to feed meat eaters.
Urban monkey challenges have been created by humans, and must be solved by humans. Monkeys are not the villain. Monkey habitats and food-sources have been greatly depleted in the wild by irresponsible human activity. Coexistence is the only solution.