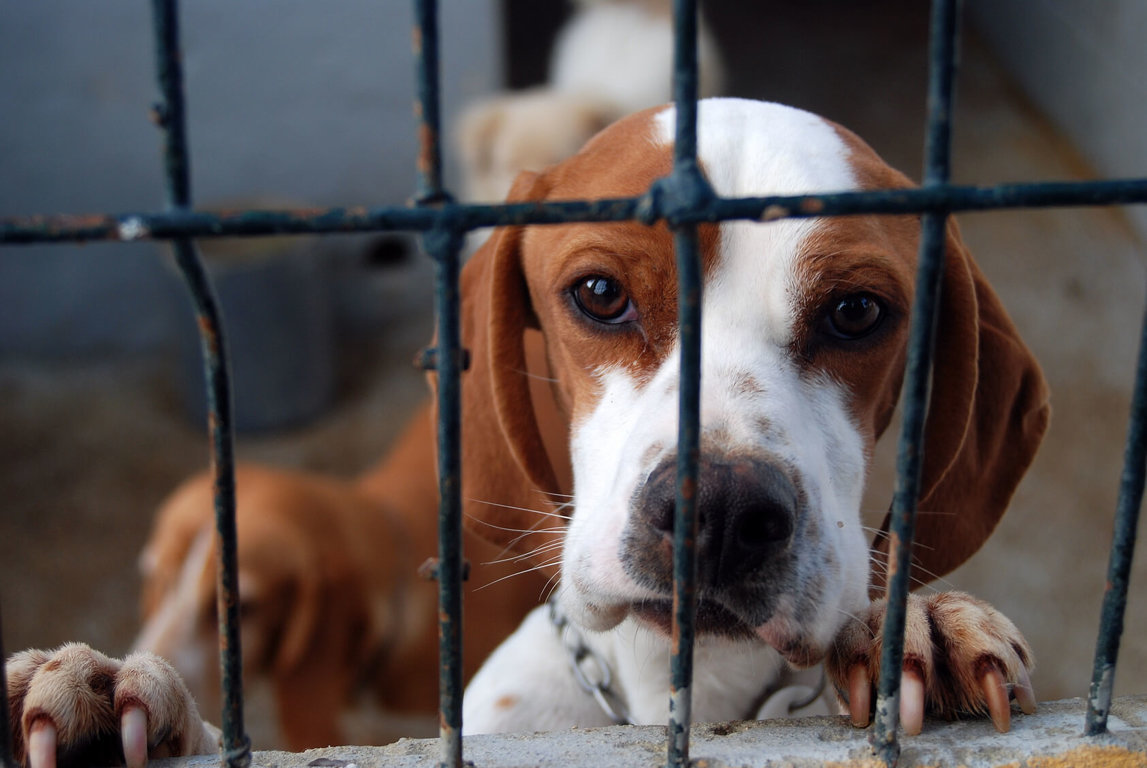 When news reports tally the casualties of war, or when monuments are erected to honor soldiers, the other-than-human victims of war--the animals whose bodies are shot, burned, poisoned, and otherwise tortured in tests to create even more ways to kill people--are never recognized, nor is their suffering well known.

The U.S. military inflicts the pains of war on hundreds of thousands of animals each year in experiments. The Department of Defense (DOD) and the Veterans Administration (VA) together are the federal government's second largest user of animals (after the National Institutes of Health). They account for nearly half of over one-and-a-half million dogs, cats, guinea pigs, hamsters, rabbits, primates, rats, mice and "wild animals" used, as reported to Congress each year. Because these figures don't include experiments that were contracted out to non-governmental laboratories, or the many sheep, goats, and pigs often shot in wound experiments, the actual total of animal victims is probably much higher.

Military testing is classified "Top Secret," and it is very hard to get current information. From published research, we know that armed forces facilities all over the United States test all manner of weaponry on animals, from Soviet AK-47 rifles to biological and chemical warfare agents to nuclear blasts. Military experiments can be acutely painful, repetitive, costly and unreliable, and they are particularly wasteful because most of the effects they study can be, or have already been, observed in humans, or the results cannot be extrapolated to human experience.

In 1946, near the Bikini Atoll in the South Pacific, 4,000 sheep, goats, and other animals loaded onto a boat and set adrift were killed or severely burned by an atomic blast detonated above them in the experiment "The Atomic Ark." At the Army's Fort Sam Houston, live rats were immersed in boiling water for 10 seconds, and a group of them were then infected on parts of their burned bodies. In 1987, at the Naval Medical Institute in Maryland, rats' backs were shaved, covered with ethanol, and then "flamed" for 10 seconds. In 1988, at Kirkland Air Force Base in New Mexico, sheep were placed in a loose net sling against a reflecting plate, and an explosive device was detonated 19 meters away. In two of the experiments, 48 sheep were blasted: the first group to test the value of a vest worn during the blast, and the second to see if chemical markers aided in the diagnosis of blast injury (they did not).

At the Armed Forces Radiobiology Research Institute in Maryland, nine rhesus monkeys were strapped in chairs and exposed to total-body irradiation. Within two hours, six of the nine were vomiting, hypersalivating, and chewing. In another experiment, 17 beagles were exposed to total-body irradiation, studied for one to seven days, and then killed. The experimenter concluded that radiation affects the gallbladder.

At Brooks Air Force Base in Texas, rhesus monkeys were strapped to a B52 flight simulator (the "Primate Equilibrium Platform"). After being prodded with painful electric shocks to learn to "fly" the device, the monkeys were irradiated with gamma rays to see if they could hold out "for the 10 hours it would take to bomb an imaginary Moscow." Those hit with the heaviest doses vomited violently and became extremely lethargic before being killed.

To evaluate the effect of temperature on the transmission of the Dengue 2 virus, a mosquito-transmitted disease that causes fever, muscle pain, and rash, experiments conducted by the U.S. Army at Fort Detrick, Md., involved shaving the stomachs of adult rhesus monkeys and then attaching cartons of mosquitoes to their bodies to allow the mosquitoes to feed. Experimenters at Fort Detrick have also invented a rabbit restraining device that consists of a small cage that pins the rabbits down with steel rods while mosquitoes feast on their bodies.

The Department of Defense has operated "wound labs" since 1957. At these sites, conscious or semiconscious animals are suspended from slings and shot with high-powered weapons to inflict battlelike injuries for military surgical practice. In 1983, in response to public pressure, Congress limited the use of dogs in these labs, but countless goats, pigs, and sheep are still being shot, and at least one laboratory continues to shoot cats. At the Army's Fort Sam Houston "Goat Lab," goats are hung upside down and shot in their hind legs. After physicians practice excising the wounds, any goat who survives is killed.

Other forms of military experiments include subjecting animals to decompression sickness, weightlessness, drugs and alcohol, smoke inhalation and pure oxygen inhalation. The Armed Forces conscript various animals into intelligence and combat service, sending them on "missions" that endanger their lives and well-being. The Marine Corps teaches dogs "mauling, snarling, sniffing, and other suitable skills" needed to search for bombs and drugs.

Thousands of animals also fall victim to military operations and even military fashion. A series of Navy tests of underwater explosives in the Chesapeake Bay in 1987 killed more than 3,000 fish, and habitats for hundreds of species have been destroyed by nuclear tests in the South Pacific and the American Southwest.