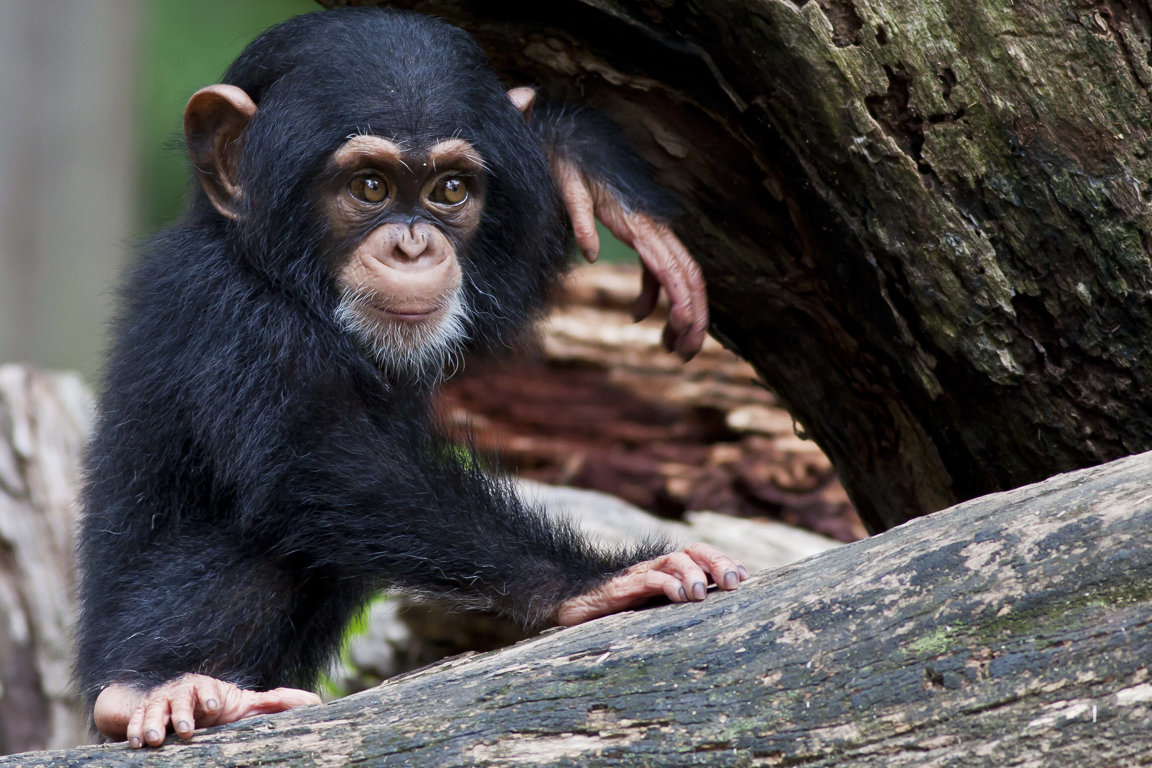 Millions chimpanzees once thrived in the forests of 25 different African nations. Today, their populations have been reduced to only 5 nations and their numbers have plummeted to between 150,000 and 300,000. Without immediate action, humans' closest living relative could be lost in only 15 years.

Humans are largely responsible for chimpanzee population declines. In addition to poaching, which plagues areas of Africa, deforesting and farming are quickly eliminating the habitats of chimps.

Legal and illegal logging is rapidly depleting habitat for chimpanzees. Agriculture is stripping away forests at alarming rates. Changes in climate may be the biggest threat of all to chimpanzees. Climate change is expected to wipe out many forest areas in the coming decades.

The Nigerian chimpanzee dwells in jungles along the Nigeria-Cameroon border. Weighing 70 kilos and reaching heights of nearly 6 feet while fully standing, this species is the most endangered of all the chimpanzee species. There are only 1,500 of them left in the Gashaka-Gumti National Park in Nigeria, a forest reserve.

The Eastern chimpanzee is a native of Central African Republic, Democratic Republic of Congo (DRC), Uganda, Rwanda, Burundi, Tanzania and the southern fringes of South Sudan. They also feature in the 2007 IUCN Red List of most endangered species.

Once a sub-Saharan species found in areas far beyond the Niger River, the Western chimpanzee now lives only in the forests of coastal countries of West Africa like Guinea, Sierra Leone, Burkina Faso, Liberia and Ivory Coast. There are about 20,000 to 55,000 individuals, as per the most recent count.

The Central chimpanzee is a native of Central Africa and can be found in the dense equatorial forests of the Congo River Basin in countries of Equatorial Guinea, Gabon and Congo. They are the most populous of all species, with a count of over 100,000 individuals.

The Bonobo, or the pygmy chimpanzee, is found only in the Democratic Republic of the Congo (DRC). Its habitat is ensconced in the southern bank of the powerful Congo River and has lent this species a different set of characteristics from other chimpanzees. It reaches a standing height of just under 4 feet, weighing in the range of 35 to 60 kilos. Bonobos appear distinctly slender when compared to other chimpanzees. There are about 30,000 to 50,000 of these creatures in their exclusive habitat in the equatorial forests of the southern Congo River basin.

Chimpanzees can adapt to both terrestrial and arboreal environments, but prefer dense forests. It is among trees where they are most at home. Chimpanzees are synonymous with trees, which is one reason why it is so essential to protect the forests they live in.

Logging results in the massive loss of forest cover every year. The growing numbers of poor humans are forced to clear forests to sustain themselves, leading to loss of habitat for the chimpanzees. The hardest hit is the Nigerian-Cameroon species that is on the brink of extinction. Many farmers use agriculture techniques that strip the soil of nutrients and quickly render it unusable, requiring more forests to be cleared.

In Tanzania's Gombe National Park, it’s the influx of refugees from strife-torn regions like Rwanda and Burundi that have taken a toll on the forest cover. The 35-sq-km park is not sufficient to cater to the needs of chimpanzees. Since they are large in size, they need more calories from sufficient food intake than such a restricted habitat can provide. This leads them to venture beyond the precincts of the park in search of food. Raiding nearby farms for maize, vegetables, and sometimes fruit, puts them in direct confrontation with man – a situation that has led to the deaths of many apes. Examples like the Gombe National Park have become widespread throughout the continent and heighten the risk for the chimps' survival.

Population pressure and consequential poverty drive many Africans to hunt for chimpanzee meat. Hunger is one reason. The other is the trade in bushmeat (the meat of wild animals as food). A family that has no sustainable income can live off the bushmeat trade, where they can earn anything from $1,000 - $3,000 in a year. This is more so the case in populous West African countries like Nigeria, Cameroon and Senegal.

Recent research reveals that the biggest threat to chimpanzees could come from climate change. Huge forest areas are likely to be wiped out in the next 50 to 60 years. While those dwelling in the deepest rainforests of Central Africa and DPR may somehow survive, habitats of forest areas of lesser expanse, like the Cameroon-Nigerian mountain jungles, are likely to perish.

Like humans, chimpanzees are susceptible to numerous diseases. Ebola and AIDs are no exception. This is one reason why so many of these animals are inhumanely kept in labs as models for biomedical research. Chimpanzees caged in such lab environments suffer from extreme mental stress emanating from boredom, confinement, and fear of experiments carried out on them.

Chimps may possess numerous traits in common with man, but that does not justify them being made a “pet” or kept in confinement in labs or zoos for man's benefit or entertainment. They must be recognized as creatures of the wild.

We need to conserve our precious forests for the protection of its denizens. Foremost in our minds should be the safeguard of chimpanzees, the most significant link to man's past.