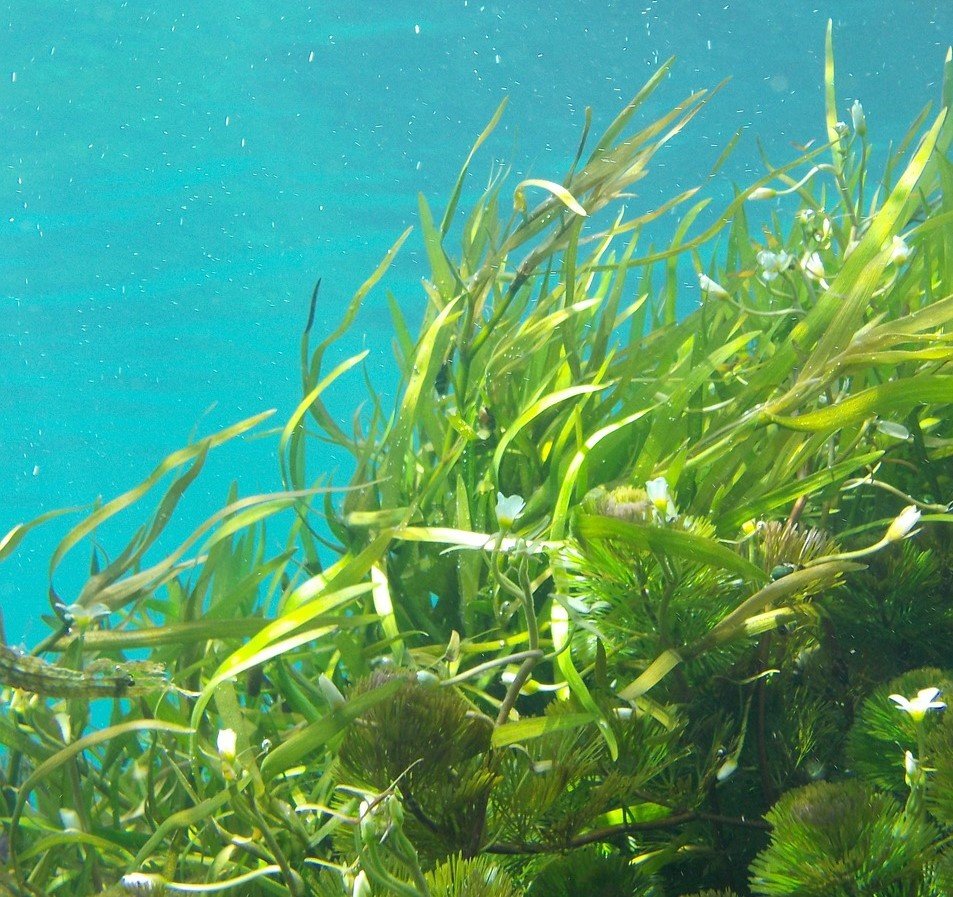 Kelp forests grow predominantly on the Pacific Coast, from Alaska and Canada to the waters of Baja California. Tiered like a terrestrial rainforest with a canopy and several layers below, the kelp forests of the eastern Pacific coast are dominated by two canopy-forming, brown macroalgae species, giant kelp (Macrocystis pyrifera) and bull kelp (Nereocystis leutkeana).

Kelp forests grow along rocky coastlines in depths of about 2 m to more than 30 m (6 to 90+ ft). Kelp favors nutrient-rich, cool waters that range in temperature from 5o to 20o C (42o to 72o F). These brown algae communities live in clear water conditions through which light penetrates easily.

Kelp survival is positively correlated with the strength of the substrate. The larger and stronger the rock on which it is anchored, the greater the chance of kelp survival. Winter storms and high-energy environments easily uproot the kelp and can wash entire plants ashore.

Instead of tree-like roots that extend into the substrate, kelp has "anchors" called holdfasts that grip onto rocky substrates. From the holdfasts, kelp plants grow toward the water's surface. Gas bladders called pneumatocysts, another unique feature of kelp, keep the upper portions of the algae afloat. A giant kelp plant has a pneumatocyst at the base of each blade. In contrast, a bull kelp plant has only one pneumatocyst that supports several blades near the water's surface.

Giant kelp is a perennial (it lives for several years) while bull kelp is an annual (it completes its life cycle in one year). Both types of kelp have a two-stage life cycle. They exist in their earliest life stages as spores, released with millions of others from the parent kelp, the sporophyte. The spores grow into a tiny male or female plant called a gametophyte, which produces either sperm or eggs. After fertilization occurs, the embryos may grow into mature plants (sporophytes), completing the life cycle.

Giant kelp can live up to seven years. Factors such as the severity of winter storms may affect its life span. Its average growth (in spring) is 27 cm/day (~10 inches/day), yet it may grow up to 61 cm/day (2 ft/day). The average growth of bull kelp is 10 cm/day (~4 inches/day).

A host of invertebrates, fish, marine mammals, and birds exist in kelp forest environs. From the holdfasts to the surface mats of kelp fronds, the array of habitats on the kelp itself may support thousands of invertebrate individuals, including polychaetes, amphipods, decapods, and ophiuroids.

California sea lions, harbor seals, sea otters, and whales may feed in the kelp or escape storms or predators in the shelter of kelp. On rare occasions gray whales have been spotted seeking refuge in kelp forests from predatory killer whales. All larger marine life, including birds and mammals, may retreat to kelp during storms or high-energy regimes because the kelp helps to weaken currents and waves.

Perhaps the most familiar image of kelp forests is a picture of a sea otter draped in strands of kelp, gripping a sea urchin on its belly. Both sea otters (Enhydra lutris) and sea urchins (Strongylocentrotus spp.) play critical roles in the stable equilibrium ecosystem. Sea urchins graze kelp and may reach population densities large enough to destroy kelp forests at the rate of 30 feet per month. Urchins move in "herds," and enough urchins may remain in the "barrens" of a former kelp forest to negate any attempt at regrowth. Sea otters, playing a critical role in containing the urchin populations, prey on urchins and thus control the numbers of kelp grazers.

Numerous natural impacts, as well as human activities, affect kelp forest environments. The factors influencing kelp forest stability are diverse: kelp harvesting; grazing by fishes, sea urchins, and crustaceans; plant competition; storms; El Niño events; sedimentation; and pollution. By most accounts, because of its spectacular growth rates, kelp recovers quickly from physical disturbances such as storms that might uproot the fragile plants. However, as in all natural environments, the health is proportional to the number of adverse conditions to which it is exposed.

Commercial kelp harvesting is potentially the greatest threat to long-term kelp stability. It has supported a multitude of industries over the past century. From the extractions of kelp during World War I for potash, to the modern use of kelp for food additives and pharmaceutical products, kelp has proven to be a dynamic and highly demanded product.

Kelp harvesting during World War I peaked in 1919 when 400,000 wet tons were used to make potash for gunpowder and fertilizer. In the 1930s the food, pharmaceutical, and scientific communities began extracting algin, a thickening, stabilizing, suspending, and gelling agent. Algin is an additive used in a wide variety of dairy products, frozen foods, cakes, puddings, salad dressings, shampoos, and toothpastes. It smooths and thickens ice cream, emulsifies salad dressing, and keeps pigments uniformly mixed in paints and cosmetics. Additionally, some mariculture farms hand-harvest kelp to feed abalone. In the 1980's alone, kelp harvesting supported an industry worth more than $40 million a year, and in 1993, more than 4,700 wet tons of kelp were extracted from the Monterey Bay National Marine Sanctuary.

Large numbers of opaleye or halfmoon fishes can damage kelp forests, particularly when the kelp is exposed to unfavorable growing conditions. As in all ecosystems, a balance exists in this complex environment, and the predators such as sea otters generally contain sea urchins or grazing fishes enough to limit the damage by grazing. This balance of power is usurped when the predatory populations go into decline, as exemplified by the huge explosion of sea urchins when otter populations suffer from oil spills or disease.

High energy storms or swells can uproot entire plants and break away fronds. Characterized by severe storms and warm water, El Niño Southern Oscillation Events, often devastate kelp forests. The strong swell activity, winter storms, and warm weather associated with the 1997-1998 El Niño were the primary sources of kelp mortality on the California coast in 1998. Kelp forests south of Point Coneception sustained up to 100 percent mortality in some regions, although comparable habitats north of that region "were relatively unaffected." Researchers attribute the discrepancy between southern and central California to ocean temperature gradients; the El Niño brought unusually high ocean temperatures to southern California where the heat degraded the health of the giant kelp forests. The combined warm water temperature and strong wave energy caused high mortality in the south. Central California bull kelp forests remained in cooler waters and thus in better condition when the winter swells hit, and a much greater percent survived.

Similarly, kelp may experience reduced growth rates and reproductive success in more toxic waters and sediments. Studies on microscopic stages of kelp suggest that kelp is sensitive to sewage, industrial waste discharges, and other causes of poor water and sediment quality.