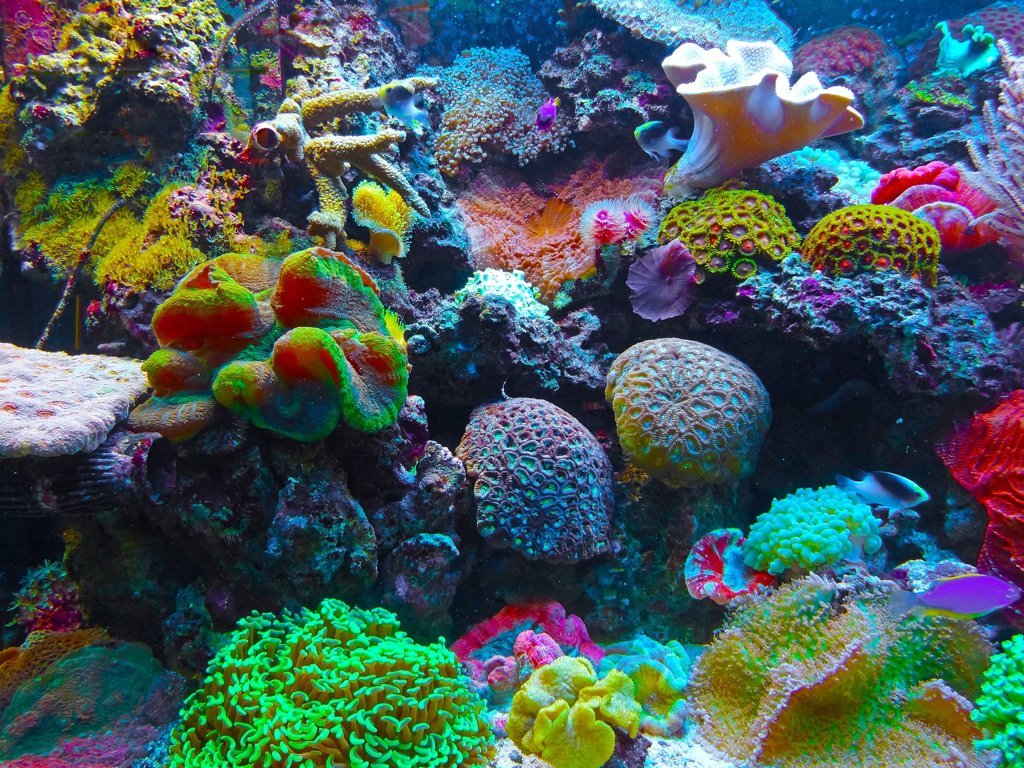 Hidden beneath the ocean waters, coral reefs teem with life. Coral reefs support more species than any other marine environment and rival rainforests in their biodiversity. Countless numbers of creatures rely on coral reefs for their survival.

Corals are animals, even though they may exhibit some of the characteristics of plants and are often mistaken for rocks. In scientific classification, corals fall under the phylum Cnidaria and the class Anthozoa. They are relatives of jellyfish and anemones. There are over 800 known species of reef­building coral worldwide and hundreds of species of soft corals and deep-sea corals.

Although individual coral polyps are tiny, they create the largest living structures on earth—some reefs are visible from space!

Coral reefs are also living museums, and reflect thousands of years of history. Many coral reefs were alive and thriving centuries before the European colonization of the nearby shores. Some reefs are even older than our old-growth redwood forests. They are an integral part of many cultures and our heritage.

These important habitats are threatened by a range of human activities. Many of the world’s reefs have already been destroyed or severely damaged by an increasing array of threats, including pollution, unsustainable fishing practices, and global climate change. As a result, 22 species of coral are now listed as threatened under the Endangered Species Act. However, we can still protect and preserve our remaining reefs if we act now.

Rainforest Of The Sea

Coral reefs, rainforest of the sea, are one of nature's most remarkable creations - teaming with thousands of unique and valuable plants and animals. More than one-quarter of all marine species depend on coral reefs for their survival. Humans depend on the survival of coral reefs too. Coral reefs provide a natural wave barrier which protects beaches and coastlines from storms and floods.

Coral reefs have existed on our planet for over 50 million years, but recently we have lost over 20% of the world's reefs in just the last 20 years. Up to 70% of the reefs may be destroyed by humans in the next few decades if we don't take immediate action.

The biologists have seen the future, and their message could not be clearer: Living coral reefs are the foundation of marine life, yet all over the world they are dead or dying because people are destroying them, killing them at a catastrophic rate. Already 10 percent are lost, and scientists say 70% of all corals on the planet will be destroyed in 20 to 40 years unless people stop doing what they're doing: pollution, sewage, erosion, cyanide fishing, clumsy tourism, and get serious about saving the coral reefs now. There's hope yet. Reefs are resilient and they bounce back quickly when protected.

Protection is the real solution and it's ordinary people who are making it happen. Government efforts in much of the world have been frankly pathetic: late, weak, underfunded, unenforced. Persian Gulf oil states pass useless pollution laws then ignore them. Indian Ocean poachers outwit and outnumber British Royal Navy patrols. Ecuador stalls for decades while tourism explodes in the delicate Galapagos, only to enact a plan that makes it worse. The status quo scarcely wavers: relentless destruction of coral reefs.

In those bright spots where people are changing the way they treat the reefs, you'll find students, divers, biologists, concerned citizens of all stripes transformed into activists and volunteers...taking matters into their own hands to protect the coral reefs that are dear to them and vital to us all.

Why Are Coral Reefs Important?

Healthy coral reefs are among the most biologically diverse and valuable ecosystems on earth, providing vital ecosystem services across the globe.


Coral reefs are an important habitat. Fish, corals, lobsters, clams, seahorses, sponges and sea turtles are only a few of the thousands of creatures that rely on reefs for their survival.

In addition to supporting an abundance of marine life, coral reef ecosystems provide people with many goods and services, including shoreline protection. Coral ecosystems protect coastlines from storms and erosion; provide habitat, spawning, and nursery grounds for fish; provide jobs and income to local economies from recreation and tourism; are a source of new medicines; have cultural significance; and are hotspots of marine biodiversity.

The benefits of healthy reefs are seen not just in the ocean, but also on land. Coral reefs contribute billions of dollars to world economies each year. The continued decline and loss of coral reef ecosystems will have significant social, cultural, economic and ecological impacts on people and communities in the U.S. and around the world.

The top threats to coral reefs, global climate change, unsustainable fishing, and land­based pollution, are all due to human activities. These threats—combined with others such as tropical storms, disease outbreaks, vessel damage, marine debris and invasive species—compound each other.

Unsustainable fishing practices in coral reef areas can lead to the loss of ecologically important fish species. Such losses often have a ripple effect on the coral reef ecosystems.

While some of the biggest threats facing coral reefs are global in nature and require action on a similar scale, addressing local stressors—like reducing runoff—is key.

Although research is critical to increasing what we know about the causes of reef decline, effective coral reef conservation can’t happen without you. Even if you live far from a coral reef, you can contribute to their conservation. Simple actions, like using less water, recycling, disposing of trash responsibly, and going vegan, can have big and far-reaching impacts.

Coral reef ecosystems are complex, dynamic, and sensitive systems. Although they are geologically robust and have persisted through major climactic shifts, they are however, sensitive to small environmental perturbations over the short-term.

Natural And Human Influences Slight changes in one component of the ecosystem affect the health of other components. Changes may be attributed to a number of causes but generally fall into two categories, natural disturbances and anthropogenic disturbances. Distinguishing between natural and anthropogenic disturbance is not always simple because the impacts of human actions may not be seen until well after the action has occurred, or may not be seen until it is coupled with a natural disturbance. Also, some events that appear to be natural may have been influenced by human actions. Impacts may be direct or indirect and may be compounded where several occur. For these reasons, it is often difficult to make cause-and-effect linkages when reef degradation is observed. Natural Disturbances Coral reef ecosystems are naturally variable and experience natural disturbances that vary on both temporal and spatial scales. Natural disturbance events that affect coral reefs include tropical storms, outbreaks of a coral predators, disease, extended periods of elevated or low water temperatures, and extremely low tides. Although these events disturb the reefs and may kill a significant amount of coral, they are part of a natural cycle that reefs experience and the reef ecosystem may benefit in other ways. The destruction caused by a hurricane, for example, opens space for reef organisms that had been excluded by larger and longer lived corals. Hurricanes also flush out accumulated sediment within the reef and create more substrate for organisms to settle and grow on. A healthy reef ecosystem will eventually recover from natural disturbance events. However, when these natural disturbances occur to a reef system that has been impacted by human activities, the reef system may have a reduced or even no capacity to rebound. A natural disturbance acting synergistically with accumulated human impacts may result in destruction that is not reversed in the same time frame it naturally would occur. Coral reefs around the world have experienced major recent natural disturbances. These natural events may have been influenced by human activities. Human Influences A recent World Resources Institute report estimates that nearly 60 percent of the world's reefs are threatened by increasing human activity. The expanding human population and its activities may impact coral reef health in a number of ways. Development, urbanization, and agriculture lead to increases in freshwater runoff, polluted runoff, sedimentation, and nutrient inputs. Growing industry and automobile usage cause an increase in emissions contributing to the green house effect and chemical deposition from air to water. Commercial and private vessel traffic mean the possibility of fuel leaks or spills, vessel groundings, and anchor damage. Harvest of reef resources is also taking a toll on the health of coral reef ecosystems. Overfishing on reefs leads to an unbalanced ecosystem, allowing more competitive or less desirable organisms to become dominant. Fishing methods such as the use of explosives and poisons severely harm reefs and reef organisms. Harvest of coral skeleton for souvenirs depletes healthy corals or substrate where coral larvae might have settled. Increased tourism in areas of coral reef habitat contributes to increased pressure from scuba diving, recreational fishing, and vessel traffic.