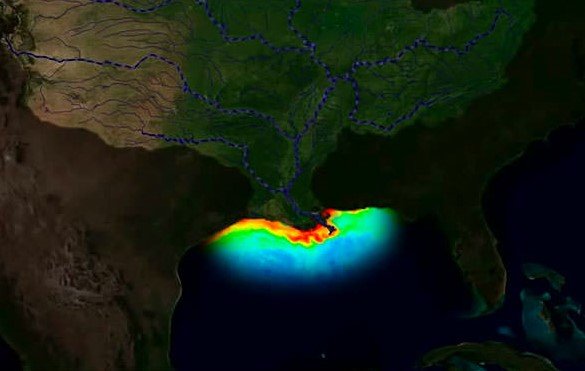 "Dead zone" is a more common term for hypoxia, which refers to a reduced level of oxygen in the water. Hypoxic zones are areas in the ocean of such low oxygen concentration that animal life suffocates and dies, and as a result are sometimes called "dead zones."

One of the largest dead zones forms in the Gulf of Mexico every spring. Each spring as farmers fertilize their lands preparing for crop season, rain washes fertilizer off the land and into streams and rivers.

Less oxygen dissolved in the water is often referred to as a “dead zone” because most marine life either dies, or, if they are mobile such as fish, leave the area. Habitats that would normally be teeming with life become, essentially, biological deserts.

Hypoxic zones can occur naturally, but scientists are concerned about the areas created or enhanced by human activity. There are many physical, chemical, and biological factors that combine to create dead zones, but nutrient pollution is the primary cause of those zones created by humans.

Excess nutrients that run off land or are piped as wastewater into rivers and coasts can stimulate an overgrowth of algae, which then sinks and decomposes in the water. The decomposition process consumes oxygen and depletes the supply available to healthy marine life.

Dead zones occur in many areas, particularly along the East Coast, the Gulf of Mexico, and the Great Lakes, but there is no part of the world that is immune. The second largest dead zone in the world is located in the U.S., in the northern Gulf of Mexico.