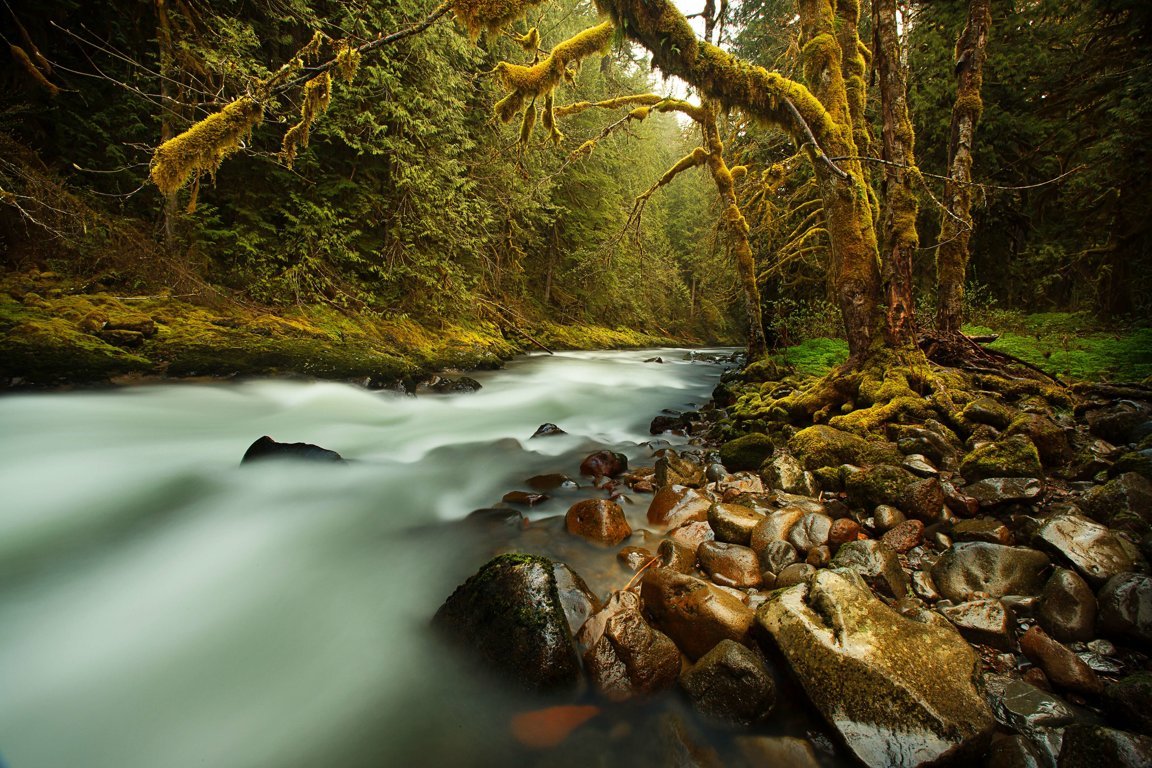 Forest biomes are dominated by trees and extend over one-third of the earth's land surface. There are three main types of forests—temperate, tropical and boreal. Each type has a different assortment of animals, climate characteristics and species compositions.

●  Temperate forests are in temperate regions of the earth including North America, Europe and Asia. They have four well-defined seasons and a growing season between 140 and 200 days. Rainfall takes place throughout the year and soils are nutrient-rich.
●  Tropical forests are located in equatorial regions between 23.5°N and 23.5°S latitude. They experience two seasons, a dry season and a rainy season. The length of each day varies little throughout the year. Soils in tropical forests are nutrient-poor and acidic.
●  Boreal forests make up the largest terrestrial habitat. They are a band of coniferous forests located in the high northern latitudes between about 50°N and 70°N. Boreal forests create a circumpolar band of habitat from Canada, to northern Europe, to eastern Russia. They are bordered by tundra habitat to the north and temperate forest habitat to the south.

Some of the wildlife that inhabit the forest biome include deer, bears, wolves, moose, caribou, gorillas, squirrels, chipmunks, birds, reptiles and insects.

The two main types of temperate forests are deciduous forests and evergreen forests.

Deciduous forests contain trees that loose their leaves in the fall. They are usually located in the Northern Hemisphere in parts of North America, Europe and Japan.

Evergreen forests are made up of trees that don't lose their leaves in the fall. They usually are found in warmer climates in South America, southern Europe, South Africa and parts of southern Australia. A more varied range of wildlife is often found in evergreen forests than deciduous forests.

Temperate forests once covered huge areas of the Northern Hemisphere. As a result of logging and deforestation for agriculture, most forests are already gone.

Coniferous forests are located in the far north, many within the Arctic Circle. They are predominantly home to conifers, the toughest and longest living trees. Conifers grow close together resulting in dense forests that are sheltered.

Boreal coniferous forests stretch across the far north from Siberia, through Northern Europe, to Alaska, covering a distance of 6 million square miles. They are 1,000 miles wide in places. A large proportion of boreal coniferous forest is in the Arctic Circle, where plants and animals are well adapted to cold temperatures.

Rainforests are home to more than 50% of all living species on the planet. They receive an abundance of rain and contain extremely diverse wildlife. The two main types of rainforest are tropical rainforests and seasonal rainforests.

Tropical rainforests are close to the Equator where the climate is warm, providing ideal conditions for plants. 170,000 of the world’s 250,000 known plant species are found in tropical rainforests. They have various layers of canopy providing a wide variety of habitats for animals. A large collection of tall tree species is made possible by a constant water flow. Tropical forests are home to smaller primates and bird species than seasonal rainforests.

The broad array of animals found in rainforests include mammals, reptiles, birds and invertebrates. Mammals include primates, wildcats and tapirs. Reptiles include a variety of snakes, turtles and lizards. Numerous species of birds and insects live in rainforests. Fungi is common, which feed on the decomposing remains of plants and animals. Many animal species have adopted a tree-dwelling (arboreal) lifestyle in the rainforest. Food is abundant in the forests due to the amount of water and plant life.

Numerous plant and animal species are rapidly disappearing from rainforests due to deforestation, habitat loss and other human activities. Around 50 million people live in rainforests. Their habitat and culture is also threatened as an alarming amount of rainforest land disappears each year.

Many factors affect forests include logging, urban sprawl, human-caused forest fires, acid rain, invasive species, and the slash and burn practices of swidden agriculture or shifting cultivation. The loss and re-growth of forest leads to a distinction between two broad types of forest, primary or old-growth forest and secondary forest.

There are also many natural factors that can cause changes in forests over time including forest fires, insects, diseases, weather, competition between species, etc. The World Resources Institute recorded that only 20% of the world's original forests remained in large, intact tracts of undisturbed forest. More than 75% of these intact forests lie in three countries - the boreal forests of Russia and Canada and the rainforest of Brazil.

Old-growth forests contain mainly natural patterns of biodiversity in established seral patterns, and they contain mainly species native to the region and habitat. The natural formations and processes have not been affected by humans with a frequency or intensity to change the natural structure and components of the habitat. Secondary forest contains significant elements of species which were originally from other regions or habitats.

Smaller areas of woodland in cities may be managed as Urban forestry, sometimes within public parks. These are often created for human benefits.

Rainforests are forests characterized by high rainfall, with definitions based on a minimum normal annual rainfall of 68 to 78 inches. The monsoon trough, alternatively known as the intertropical convergence zone, plays a significant role in creating the climatic conditions necessary for the earth's tropical rainforests.

Rainforests cover 2% of the earth's surface, or 6% of its land mass. They originally covered at least twice that area. Tropical rainforests are the earth's oldest living ecosystems. Fossil records show that the forests of Southeast Asia have existed in more or less their present form for 70 to 100 million years.

Around 40% to 75% of all biotic species are indigenous to the rainforests. It has been estimated that there may be many millions of species of plants, insects and microorganisms still undiscovered in tropical rainforests.

Tropical rainforests have been called the "jewels of the earth" and the "world's largest pharmacy", because over one quarter of natural medicines have been discovered there. Rainforests are also responsible for 28% of the world's oxygen turnover, processing it through photosynthesis from carbon dioxide and storing it as carbon through biosequestration.

The undergrowth in a rainforest is restricted in many areas by the poor penetration of sunlight to ground level. This makes it easy to walk through undisturbed, mature rainforest. If the leaf canopy is destroyed or thinned, the ground beneath is soon colonized by a dense, tangled growth of vines, shrubs and small trees, called a jungle.

There are two types of rainforest, tropical rainforest and temperate rainforest.

Tropical rainforests are rainforests in the tropics, found in the equatorial zone (between the Tropic of Cancer and Tropic of Capricorn). Tropical rainforests are present in Southeast Asia (from Myanmar (Burma) to Philippines, Indonesia, Papua New Guinea and northeastern Australia), Sri Lanka, sub-Saharan Africa from Cameroon to the Congo (Congo Rainforest), South America (e.g. the Amazon Rainforest), Central America (e.g. Bosawás, southern Yucatán Peninsula-El Peten-Belize-Calakmul), and on many of the Pacific Islands (such as Hawai).

Temperate rainforests are rainforests in temperate regions. They occur in North America (in the Pacific Northwest, the British Columbia Coast and in the inland rainforest of the Rocky Mountain Trench east of Prince George), in Europe (parts of the British Isles such as the coastal areas of Ireland and Scotland, southern Norway, parts of the western Balkans along the Adriatic coast, as well as in the North West of Spain and coastal areas of the eastern Black Sea, including Georgia and coastal Turkey), in East Asia (in southern China, Taiwan, much of Japan and Korea, and on Sakhalin Island and the adjacent Russian Far East coast), in South America (southern Chile) and also in Australia and New Zealand.

More than half of the world's species of plants and animals are found in the rainforest. Rainforests support a very broad array of fauna, including mammals, reptiles, birds and invertebrates. Mammals may include primates, felids and other families. Reptiles include snakes, turtles, chameleons and other families; while birds include such families as vangidae and Cuculidae. Dozens of families of invertebrates are found in rainforests. Fungi are also very common in rainforest areas as they can feed on the decomposing remains of plants and animals. Many rainforest species are rapidly disappearing due to deforestation, habitat loss and pollution of the atmosphere.

On January 18, 2007, FUNAI reported also that it had confirmed the presence of 67 different uncontacted tribes in Brazil. The province of Irian Jaya or West Papua in the island of New Guinea is home to an estimated 44 uncontacted tribal groups. The tribes are in danger because of the deforestation, especially in Brazil. Central African rainforest is home of the Mbuti pygmies, one of the hunter-gatherer peoples living in equatorial rainforests characterized by their short height (below 59 inches, on average).

Tropical and temperate rainforests have been subjected to heavy logging and agricultural clearance throughout the 20th century and the area covered by rainforests around the world is shrinking. Biologists have estimated that large numbers of species are being driven to extinction, possibly more than 50,000 a year. A quarter or more of all species on earth could be exterminated within 50 years due to the removal of habitat with destruction of the rainforests. Four-fifths of the nutrients in the rainforests are in the vegetation. This means that the soils are nutrient-poor and become eroded and unproductive within a few years after the rainforest is cleared.

Another factor causing the loss of rainforest is expanding urban areas. Littoral rainforest growing along coastal areas of eastern Australia is now rare due to ribbon development to accommodate the demand for seachange lifestyles.

The forests are being destroyed at a rapid pace. Almost 90% of West Africa's rainforest has been destroyed. Since the arrival of humans 2000 years ago, Madagascar has lost two thirds of its original rainforest. At present rates, tropical rainforests in Indonesia will be logged out in 10 years and Papua New Guinea in 13 to 16 years. All the primary rainforests in India, Bangladesh, Sri Lanka and Haiti have been destroyed already. The Ivory Coast rainforests have been almost completely logged. The Philippines lost 55% of its forest between 1960 and 1985; Thailand lost 45% of its forest between 1961 and 1985.

Rainforests support 90,000 of the 250,000 identified plant species. Scientists estimate that there are at least 30,000 as yet undiscovered plants, most of which are rainforest species. A typical four square mile patch of rainforest contains as many as 1,500 species of flowering plants, 750 species of trees, 125 mammal species, 400 species of birds, 100 of reptiles, 60 of amphibians, and 150 different species of butterflies. In one study, one square meter of leaf litter, when analyzed, turned up 50 species of ants alone.

The uneven distribution of wealth and land is one major factor in the destruction of tropical forests. The World Bank estimates that of the 2.5 billion people now living in the tropics one billion exist in absolute poverty.