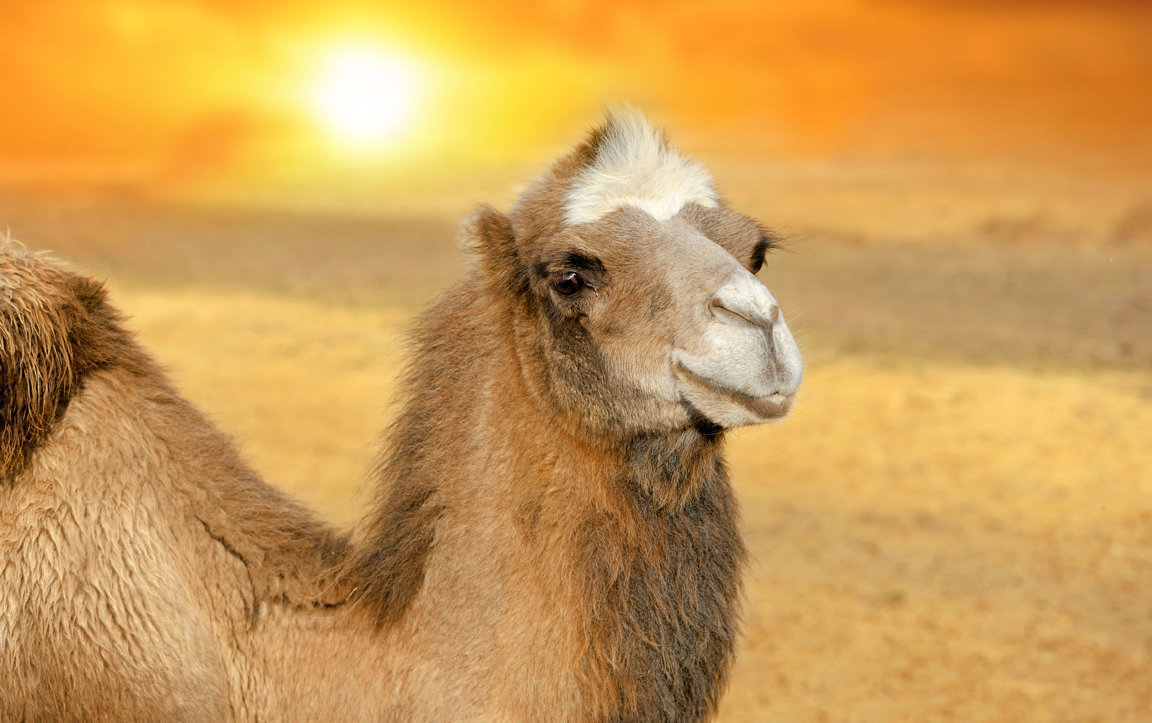 Desert biomes receive very little rain and cover about one-fifth of the planet's surface. They are divided into four sub-habitats based on their location, aridity, climate and temperature: arid deserts, semi-arid deserts, coastal deserts and cold deserts.
●  Arid deserts are hot and dry and are located at low latitudes throughout the world. Temperatures are warm all year and hottest during the summer. Arid deserts receive little rainfall, and most rain that does fall usually evaporates. Arid deserts are located in North America, South America, Central America, Africa, Australia and Southern Asia.
●  Semi-arid deserts are usually not as hot and dry as arid deserts. They have long, dry summers and cool winters with some rain. Semi arid deserts are found in North America, Europe, Asia, Newfoundland and Greenland.
●  Coastal deserts are usually located on the western edges of continents at approximately 23°N and 23°S latitude, the Tropic of Cancer and the Tropic of Capricorn. Cold ocean currents run parallel to the coast, producing heavy fogs. Despite high humidity in coastal deserts, it rarely rains.
●  Cold deserts have low temperatures and long winters and are found above the treelines of mountain ranges and in the Arctic and Antarctic. They experience more rain than other deserts. Many locations of the tundra are cold deserts.
Desert animals include coyotes, kangaroo rats, spiders, meerkats, roadrunners, reptiles, toads, snakes, pronghorn, birds and bats.
Dry and baron landscapes, deserts receive intense sunshine and little rain. They are places of extremes, with a greater range of temperatures throughout the day than any other habitats. Temperatures range from boiling in the middle of the day, to freezing at night.
The two main types of deserts are true deserts (hot deserts) and semi-deserts.
True deserts are located on either side of the tropics.
Semi-deserts occur on every continent, usually far from the tropics. Semi-deserts receive at least twice as much rain each year than true deserts.
Deserts are formed from large fluctuations in temperature between day and night which puts strain on rocks. The stress causes the rocks to break into pieces. Occasional downpours of rain cause flash floods. The rain falling on hot rocks can cause them to shatter. The rubble is strewn over the ground and further eroded by the wind. Wind-blown sand grains further break down stones, causing more sand. Rocks are smoothed down, and the wind sorts sand into deposits. The grains end up as sheets of sand.
Other deserts are flat, stony plains where all the fine material has been blown away leaving an area of smooth stones. These deserts are called desert pavements and little further erosion takes place. Some deserts include rock outcrops, exposed bedrock and clays once deposited by flowing water. Oases occur where there are underground sources of water in the form of springs and seepages from aquifers.
A unique desert is the Gobi desert in Asia which is located across China and stretches up to the Siberian Mountains where winters are very cold. Despite the cold winters, the mountains block rain-clouds from reaching the desert area.
A variety of plants and animals live in desert habitats. Plants tend to be tough and wiry with small or no leaves. Some plants germinate, bloom and die in the course of a few weeks after rainfall. Some long-lived plants survive for years with deep roots that tap into underground moisture.
Most animals are nocturnal, coming above ground or out of the shade at night when temperatures are cooler. Reptiles, insects and small birds are the most common animals in true deserts. Mammals are more common in semi-deserts, where plant life is more plentiful.
Animals of the deserts are adapted to dry and arid conditions. They are efficient at conserving water, extracting most of their needs from their food and concentrating their urine. The addax antelope, dik-dik, Grant's gazelle and oryx never need to drink. The thorny devil in Australia sucks water through channels in its body located from its feet to its mouth. The camel minimizes its water loss by producing concentrated urine and dry dung, and is able to lose 40% of its body weight through water loss without dying of dehydration. Camels have humps of fatty tissue that concentrate body fat in one area, minimizing the insulating effect fat would have if distributed over their whole bodies. Birds are able to fly to areas of greater food availability as the desert blooms after local rainfall, and can fly to faraway waterholes. Carnivores obtain much of their water needs from the body fluids of their prey.
Flies, beetles, ants, termites, locusts, millipedes, scorpions and spiders have hard cuticles which are impervious to water and many lay their eggs underground where their young develop away from the surface temperature extremes. Some arthropods make use of the ephemeral pools that form after rain and complete their life cycle in a matter of days.
Reptiles do not sweat, so they shelter during the heat of the day. In the first part of the night, as the ground radiates the heat absorbed during the day, they emerge and search for prey. Some snakes move sidewards to navigate high sand-dunes. Even amphibians have adapted to desert habitats, spending the hot dry months in deep burrows where they shed their skins numerous times to create cocoons around them to retain moisture.
Some animals remain in a state of dormancy for long periods, becoming active again when the rare rains fall. They then reproduce rapidly while conditions are favorable before returning to dormancy.
Deserts habitats have been the least affected by human activities, remaining relatively untouched. Threats do include extraction of oil from the sand and grazing farm animals that deplete desert plants, threatening wildlife that rely on those plants. Desertification can be caused by tilling for agriculture, overgrazing and deforestation.

What Is A Desert?

Deserts are classified by their geographical location and dominant weather pattern as trade wind, midlatitude, rain shadow, coastal, monsoon, or polar deserts. Former desert areas presently in nonarid environments are paleodeserts, and extraterrestrial deserts exist on other planets.
Trade Wind Deserts
The trade winds in two belts on the equatorial sides of the Horse Latitudes heat up as they move toward the Equator. These dry winds dissipate cloud cover, allowing more sunlight to heat the land. Most of the major deserts of the world lie in areas crossed by the trade winds. The world's largest desert, the Sahara of North Africa, which has experienced temperatures as high as 57° G, is a trade wind desert.
Midlatitude Deserts
Midlatitude deserts occur between 30° and 50° N. and S., poleward of the subtropical highpressure zones. These deserts are in interior drainage basins far from oceans and have a wide range of annual temperatures. The Sohoran Desert of southwestern North America- is a typical midlatitude desert.
Rain Shadow Deserts
Rain shadow deserts are formed because tall mountain ranges prevent moisture-rich clouds from reaching areas on the lee, or protected side, of the range. As air rises over the mountain, water is precipitated and the air loses its moisture content. A desert is formed in the leeside "shadow" of the range.
Coastal Deserts
Coastal deserts generally are found on the western edges of continents near the Tropics of Cancer and Capricorn. They are affected by cold ocean currents that parallel the coast. Because local wind systems dominate the trade winds, these deserts are less stable than other deserts. Winter fogs, produced by upwelling cold currents, frequently blanket coastal deserts and block solar radiation. Coastal deserts are relatively complex because they are at the juncture of terrestrial, oceanic, and atmospheric systems. A coastal desert, the Atacama of South America, is the Earth's driest desert. In the Atacama, measurable rainfall 1 millimeter or more of rain may occur as infrequently as once every 5-20 years. Crescent-shaped dunes are common in coastal deserts such as the Namib, Africa, with prevailing onshore winds.
Monsoon Deserts
"Monsoon," derived from an Arabic word for "season," refers to a wind system with pronounced seasonal reversal. Monsoons develop in response to temperature variations between continents and oceans. The southeast trade winds of the Indian Ocean, for example, provide heavy summer rains in India as they move onshore. As the monsoon crosses India, it loses moisture on the eastern slopes of the Aravalli Range. The Rajasthan Desert of India and the Thar Desert of Pakistan are parts of a monsoon desert region west of the range.
Polar Deserts
Polar deserts are areas with annual precipitation less than 250 millimeters and a mean temperature during the warmest month of less than 10° C. Polar deserts on the Earth cover nearly 5 million square kilometers and are mostly bedrock or gravel plains. Sand dunes are not prominent features in these deserts, but snow dunes occur commonly in areas where precipitation is locally more abundant. Temperature changes in polar deserts frequently cross the freezing point of water. This "freezethaw" alternation forms patterned textures on the ground, as much as 5 meters in diameter.