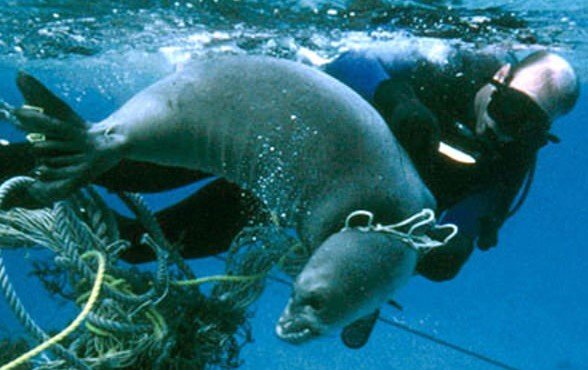 Landfills take in most of this garbage, while a substantial amount of litter finds its way into the natural environment. Tens of thousands of cans and bottles are thrown out of moving vehicles everyday. An enormous amounts of waste is left behind on beaches, parks and river banks. One clean-up drive alone along a US coastline collected over 3.5 million tons of garbage. A two-mile highway stretch of West Virginia yielded over 30,000 items of litter.

Imagine if that litter was being tossed into your home. For wildlife, this is the disturbing and dangerous reality of litter.

What is litter to us, unwittingly becomes food for hungry animals. This litter may seem useful to animals, but it is often harmful or deadly. Discarded foods are prone to quick contamination and the microorganisms that cause food poisoning can be fatal to animals.

Broken glass can cut the feet of wild animals, and unbroken bottles can be a death trap. Hungry animals in search of food remains at the bottom of a jar or can often get their heads stuck, causing fatal suffocation. Even the tiniest of creatures can be lured by something like a beer or soda can. The sharp edges of a discarded can can be a threat to such delicate creatures seeking shelter or a taste of what remains inside.

Highways have become deathbeds for many unwary animals foraging for food. Litter tossed out of car windows onto freeways attracts inquisitive deer, coyotes, raccoons and skunks. Foxes forage for garbage on our streets at night, followed by pigeons during the day feasting on the night's leftovers. In addition to the hazards posed by litter, these animals often suffer serious injuries or death from vehicle collisions.

Aquatic animals are among the worst affected by human litter. Trash tossed carelessly outside washes into storm drains and creeks, which empty into rivers that eventually flow to the oceans. Trash adversely affects the habitat of marine and other aquatic environments causing death and injury to seabirds, fish, marine mammals, turtles and countless other species through swallowing and entanglement. Fishing hooks are often injested by pelicans, turtles, seabirds and other aquatic creatures. Often, larger items like nets, fishing line, and abandoned crab pots snare or trap animals. Entanglement can lead to injury, illness, suffocation, starvation, and death. Seabirds suffer lead poisoning from ingesting small lead fishing weights. Seabirds have also moved inland to garbage dumps where they injest a variety of rubbish.

Plastic bags on the seafloor take 10 to 20 years to decompose. Plastic bottles take much longer. As a result, one piece can kill more than one animal. An animal killed by ingesting plastic will decompose long before the plastic, allowing the plastic to kill again.

Litter along our coastlines, much of it plastic, is often digested by seabirds, turtles and whales. Seagulls act as scavengers and consume litter from food leftovers on beaches. Serious consequences for these creatures include stomach and bowel damage, strangulation and death. Many more animals are ensnared by plastic six-pack holders.

Cigarette butt waste is not only unsightly, but when ingested may be hazardous to the health of animals. Cigarette butts are commonly discarded onto beaches, sidewalks, streets, parks and many other public places where domestic animals and wildlife may be exposed to risk of ingestion. When carelessly discarded, they are carried from storm sewers and beaches to streams, lakes and oceans. Sea creatures, birds and companion animals are indiscriminate eaters. Ingested cigarette butts can choke an animal or poison it with toxins. Animals may not be able to regurgitate such items, with some acquiring gastrointestinal bezoars that can lead to a false sense of satiation and subsequent under-nutrition.

Balloons are great at birthdays, weddings, graduations and more, but once they get loose, balloons can pose a threat to many animals. Birds, turtles and other wildlife commonly mistake balloons for food, which can harm or kill them. In addition, many animals become entangled in balloon strings, which can injury or even strangle them.

Attitudes towards litter management seem to be shifting towards the positive, albeit slowly. Landfills, the biggest receivers of garbage, have made some progress concerning the protection of wildlife. Improving package design and construction can reduce needless waste and render them less harmful to animals. But real change has to come from individuals. Recycling techniques adopted domestically can reduce outflow of litter from homes dramatically. Education on basic rudiments of garbage management and disposal at the domestic level can indeed go a long way in mitigating the threat to animals foraging for litter.

At the root of this growing hunger for trash lies the shrinking natural habitat of animals affected by unwarranted development. In the human quest for faster progress, the environment is the biggest casualty and animals are the victims. It is our responsibility to save animals from the hazards we have created. With the mountain of garbage being added daily to the earth's surface and seas by our teeming billions, a huge challenge faces us into the future.

- Cut back on the amount of trash you produce.

- Opt for reusable items instead of single-use products.

- Recycle as much of your trash as you can.

- Spend one hour picking up litter. Organize a team of family, friends, or co-workers to pick up litter in your local neighborhood, wildlife refuge or park. Enjoy making a difference, getting exercise, getting to know people better and having cleaner surroundings.