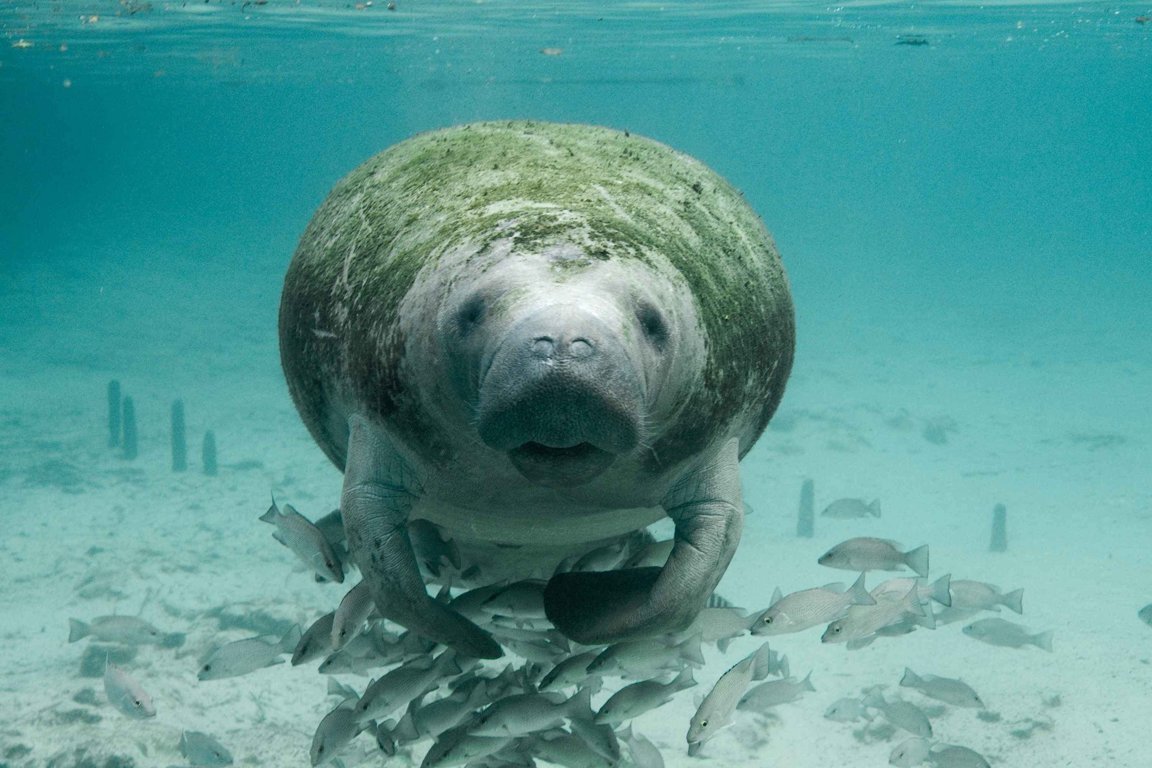 While some claim the manatee is ugly, with ‘a face only a mother could love,’ most people seem drawn to this fascinating marine creature. Whether it’s their sad, puppy-like demeanor, or their sluggish, gentle manner, something about manatees is awfully endearing.

The manatee, or sea cow, is an aquatic mammal. With a round cylindrical body, they can measure from 8 to 13 feet from tail to head. Weights can vary from 450 lbs for the smallest species to 1,300 lbs for the larger ones. Some can even grow up to 3,000 lbs.

Primarily herbivorous, manatees spend up to eight hours each day quietly grazing on seagrasses and other aquatic plants, though they will occasionally feed on fish.

Manatees surface for air about once every five minutes, but can remain submerged for up to twenty minutes when they are resting. Their lungs are positioned along the backbone, which helps with buoyancy control. They swim by waving their wide paddle tails up and down, and because they do not possess the neck vertebra that most other mammals have, they must turn their entire bodies to look around.

Manatees can hear quite well, at least at high frequencies. This is likely an adaptation to shallow water living, where low frequency sounds aren’t transmitted well because of physical barriers. Their inability to hear the low frequency churning of an approaching boat might explain why manatees are susceptible to injury by boat propellers, a top reason for the decline in their populations.

West Indian manatees are the largest of the three main manatee species. They are gray in color, have a whale-like body, and a tail that is shaped like a paddle. This species of manatee is mostly found in the waters of the Caribbean Sea and south-eastern fringes of the US, especially the coastal areas of Florida and Georgia where they prefer to wade in warm shallow waters. They also occur in Texas, Mexico, Puerto Rico and elsewhere in the Caribbean. This species takes in a daily diet of sea weeds and plants, up to 10-15 percent of  their body weight.

West Indian manatees were listed as endangered in 1967 concurrent with the creation of the Endangered Species Conservation Act, an act that pre-dated the federal Endangered Species Act of 1973. Accidental collisions with boats are the primary cause of death for these shallow water-inhabiting animals, followed by low reproductive rates and a decline in suitable habitat. Another important threat is loss of reliable warm water habitats that allow manatees to survive the cold in winter. Natural springs are threatened by increased demands for water supply. Deregulation of the power industry may also result in less reliable man-made sources of warm water. Seagrass and other aquatic foods that manatees depend on are affected by water pollution, and sometimes direct destruction.

The Amazonian manatee can reach up to 9 feet in length and weigh up to 500 lbs. It is the smallest of the tree species. This species of manatee is basically a fresh water creature found in the upper reaches of the Amazon river and its tributaries that span the countries of Brazil, Guyana, Colombia, Ecuador and Peru. Water lettuce and hyacinth are their main diet, requiring 8 percent of their body weight daily. They have a flat and elongated rear and a hippo-like snout, both characteristics that make the Amazonian manatee an unusual looking animal.

Although hunting of the Amazon manatee was banned in 1974, there seems to be no end to the poaching of the animal. It's still being hunted down for its meat and oil. Massive deforestation of the Amazon basin, and mining for gold, has led to the habitat of the manatee considerably shrinking over the decades. Once found all over the huge Amazon basin area, it is a rare sight nowadays – leading conservationists to believe that it could become extinct.

Of all the three species of manatee, the West African is the one few people have heard of. They dwell all along the coastline of West Africa, especially in the shallow and warm waters of estuaries and lagoons flowing into the Atlantic. The country-wise distribution of their habitat is Angola, Benin, Cameroon, Congo, Ivory Coast, Equatorial Guinea, Ghana, Gabon, Guinea-Bissau, Liberia, Nigeria, Senegal, Togo and Sierra Leone. The preferred daily diet of this species is the leaves of the low overhanging trees of the extensive mangrove forests abounding the mouth-waters of the massive Niger river and Congo river deltas.

For the West African manatee, the threats are similar to its Amazonian cousin in the sense that its meat fetches a considerable price in the markets. In many places it is openly displayed for sale. It is also poached for sale to zoos and aquariums of private collectors. Rapid agricultural and urban expansion, massive and unhindered exploration for oil in Nigerian delta waters, and extreme congestion of vessels and boats in shallow waters are serious threats to the habitat of the African manatee. Fishing equipment, such as large nets, are also a threat. Manatees trapped inside them are killed by the fishermen before they can cause considerable damage to the nets. Natural occurrences, like shifting tides and eddies, are also threats as manatees are shallow-water creatures. Like the Amazonian manatee, their numbers are dwindling.

The Convention on International Trade in Endangered Species (CITES) enforces controls on the export of the West African manatee. Hunting of the animal is now banned in almost all the countries of its habitat. In countries like Côte d’Ivoire, Nigeria, Guinea-Bissau and Senegal, conservation programs have seen areas being demarcated as protected zones for the manatees. Conservation organizations are also making an effort to educate the populace in these regions about the manatee.

Manatee conservation and recovery involves many partners from government and industry, as well as many citizens. Great strides have been made in the protection and recovery of the manatee. Numerous manatee speed zones have been established. Many sick and injured manatees are rescued every year. These animals are often rehabilitated and returned to the wild. Recommendations and actions to prevent manatee deaths related to water-control structures and navigation locks have included modification of gate openings and installation of pressure sensitive and acoustic devices on some of the most deadly locks. All efforts to reduce water pollution help to maintain and restore aquatic vegetation. Extensive manatee conservation education work has been conducted by federal, state and private entities.

The West Indian manatees are now doing comparatively better than their Amazonian and African counterparts. However, there is much left to be done to secure their future. This will require the cooperation and support of everyone: government, orgainzations, the private sector and boaters.

Rotors of fast-moving water crafts once took many lives each year. Thanks to awareness and dissemination of information concerning the safety of the sea mammals, such mishaps have been reduced considerably. But areas where watercraft-related injury and mortality continue to occur have almost no protective measures for manatees.

Warm water wintering sites need to be secured. Important spring flows must be maintained. We must ensure that aquatic vegetation is adequate to support a recovered population.

Red tide, a natural occurrence in the Gulf of Mexico, is another threat to the manatee. Exposure to toxic algal bloom created by the red tide can be lethal to manatees. Scientists are investigating links between the run-off of wastes into the sea and the red tide phenomena.

The great news for these likeable creatures and their enthusiasts is that their count has increased five-fold within a decade and half. In 1991, a count of the West Indian manatees around Florida found just 1,267 inhabiting the area. The number has increased to an astonishing 6,250. The West Indian species is finally out of the list of endangered animals.

Although the struggle will be uphill, one can only hope that similar efforts are made to wean away the Amazonian and West African manatee from the path of extinction and put them in one that leads to multiplication of their numbers.