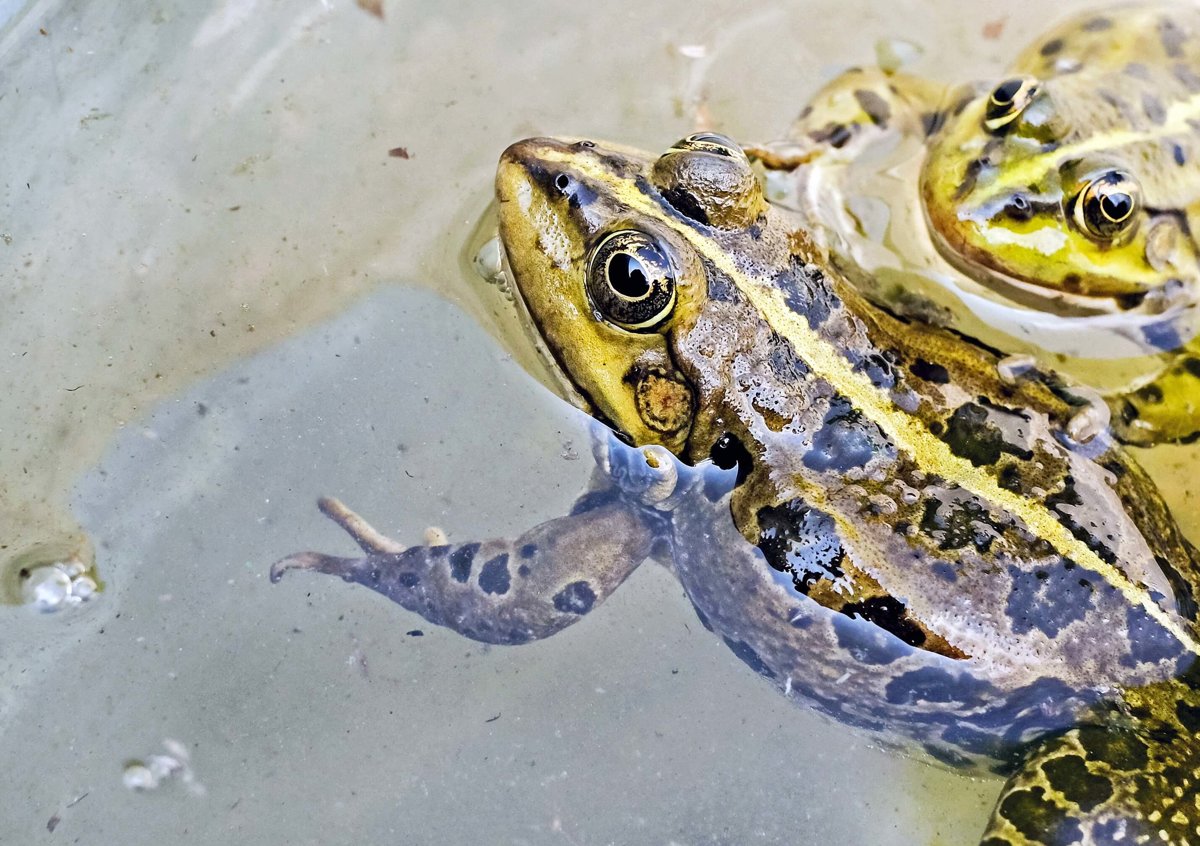 Frogs are amphibians characterized by a short body, webbed digits (fingers or toes), protruding eyes and the absence of a tail. Frogs are widely known as exceptional jumpers, and many of the anatomical characteristics of frogs, particularly their long, powerful legs, are adaptations to improve jumping performance.

Due to their permeable skin, frogs are often semi-aquatic or inhabit humid areas, but move easily on land. They typically lay their eggs in puddles, ponds or lakes, and their larvae, called tadpoles, have gills and develop in water. Adult frogs follow a carnivorous diet, mostly of arthropods, annelids and gastropods. Frogs are most noticeable by their call, which can be widely heard during the night or day, mainly in their mating season.

The distribution of frogs ranges from tropic to subarctic regions, but most species are found in tropical rainforests. Consisting of more than 5,000 species, they are among the most diverse groups of vertebrates. However, populations of certain frog species are declining significantly.

A popular distinction is often made between frogs and toads on the basis of their appearance, but this has no taxonomic basis. From a taxonomic perspective, all members of the order Anura are frogs, but only members of the family Bufonidae are considered "true toads". The use of the term "frog" in common names usually refers to species that are aquatic or semi-aquatic with smooth and/or moist skins, and the term "toad" generally refers to species that tend to be terrestrial with dry, warty skin. An exception is the fire-bellied toad (Bombina bombina): while its skin is slightly warty, it prefers a watery habitat. Frogs are generally recognized as exceptional jumpers, and the best jumper of all vertebrates. The Australian rocket frog, Litoria nasuta, can leap over 50 times its body length.

A tree frog is any frog that spends a major portion of its lifespan in trees, known as an arboreal state. These frogs are typically found in very tall trees or other high-growing vegetation. They do not normally descend to the ground, except to mate and spawn, though some build foam nests on leaves and rarely leave the trees at all as adults. Many tree frogs can change their color for better camouflage. Tree frogs are usually tiny, as their weight has to be carried by the branches and twigs of their habitat. Typical for tree frogs are the well-developed discs at the finger and toe tips; the fingers and toes themselves as well as the limbs tend to be rather long, resulting in a superior grasping ability.

Many frogs are able to absorb water and oxygen directly through the skin, especially around the pelvic area. However, the permeability of a frog's skin can also result in water loss. Some tree frogs reduce water loss with a waterproof layer of skin. Others have adapted behaviors to conserve water, including engaging in nocturnal activity and resting in a water-conserving position.

Camouflage is a common defensive mechanism in frogs. Most camouflaged frogs are nocturnal, which adds to their ability to hide. Nocturnal frogs usually find the ideal camouflaged position during the day to sleep. Some frogs have the ability to change color, usually restricted to shades of one or two colors. Features such as warts and skin folds are usually found on ground-dwelling frogs, where a smooth skin would not disguise them. Tree frogs usually have smooth skin, enabling them to disguise themselves as leaves. Some frogs change color between night and day.

Many frogs contain mild toxins that make them unpalatable to potential predators. For example, all toads have large poison glands - the parotoid glands - located behind the eyes, on the top of the head. Some frogs, such as some poison dart frogs, are especially toxic. The chemical makeup of toxins in frogs varies from irritants to hallucinogens, convulsants, nerve poisons and vasoconstrictors. Many predators of frogs have adapted to tolerate high levels of these poisons. Others, including humans, may be severely affected. Some frogs obtain poisons from the ants and other arthropods they eat; others can manufacture an alkaloid not derived from their diet. Some native people of South America extract poison from the poison dart frogs and apply it to their darts for hunting, although few species are toxic enough to be used for this purpose. Poisonous frogs tend to advertise their toxicity with bright colors, an adaptive strategy known as aposematism. Some non-poisonous species of frogs mimic the coloration of poison frogs' coloration for self-protection.

The life cycle of a frog starts with an egg. A female generally lays gelatinous egg masses containing thousands of eggs in water. The eggs are highly vulnerable to predation, so frogs have evolved many techniques to ensure the survival of the next generation. In colder areas the embryo is black to absorb more heat from the sun, which speeds up the development. Many individuals will breed at the same time, overwhelming the actions of predators. Another way in which some species avoid the predators and pathogens eggs are exposed to in ponds is to lay eggs on leaves above the pond, with a gelatinous coating designed to retain moisture. In these species, the tadpoles drop into the water upon hatching. The eggs of some species laid out of water can detect vibrations of nearby predatory wasps or snakes, and will hatch early to avoid being eaten. Some species lay poisonous eggs to minimize predation.

While the length of the egg stage depends on the species and environmental conditions, aquatic eggs generally hatch within one week. Other species go through their whole larval phase inside the eggs or the mother, or have direct development. Unlike salamanders and newts, frogs and toads never become sexually mature while still in their larval stage. Eggs hatch and continue life as tadpoles. Tadpoles are typically herbivorous, feeding mostly on algae, including diatoms filtered from the water through the gills. Some species are carnivorous at the tadpole stage, eating insects, smaller tadpoles, and fish. Cannibalism has been observed among tadpoles. Early developers who gain legs may be eaten by the others, so the late bloomers survive longer.

At the end of the tadpole stage, frogs undergo metamorphosis, in which they transition into the adult form. This metamorphosis last typically only 24 hours. The disappearance of the tail is somewhat later. The material of the tail is used for a quick growth of the legs. After the tail has been reabsorbed, the animals are ready to leave the water and disperse into terrestrial habitats, or continue to live in the aquatic habitat as adults.

Almost all species of frogs are carnivorous as adults, eating invertebrates such as arthropods, annelids and gastropods. A few of the larger species may eat prey such as small mammals, fish and smaller frogs. Some frogs use their sticky tongues to catch fast-moving prey, while others capture their prey and force it into their mouths with their hands. There are some species that primarily eat plants. Adult frogs are preyed upon by birds, large fish, snakes, otters, foxes, badgers and other animals. Frogs can live for many years; recorded living up to 40 years. Frogs from temperate climates hibernate through the winter.

Once adult frogs reach maturity, they will assemble at a water source such as a pond or stream to breed. Many frogs return to the bodies of water where they were born, often resulting in annual migrations involving thousands of frogs. Once at the breeding ground, male frogs call to attract a mate, collectively becoming a chorus of frogs. The call is unique to the species. Some species have satellite males who do not call, but intercept females that are approaching a calling male. The male and female frogs then undergo amplexus. This involves the male mounting the female and gripping her tightly. Fertilization is external: the egg and sperm meet outside of the body. The female releases her eggs, which the male frog covers with a sperm solution. The eggs then swell and develop a protective coating.

Some species of frog lay eggs on the forest floor and protect them, guarding the eggs from predation and keeping them moist. The frog will urinate on them if they become too dry. After hatching, a parent will move them, on its back, to a water-holding bromeliad. The parent then feeds them by laying unfertilized eggs in the bromeliad until the young have metamorphosed. Other frogs carry the eggs and tadpoles on their hind legs. Some frogs even protect their offspring inside their own bodies with pouches along their side. Some swallow their tadpoles, which then develop in the stomach. Some will put the tadpoles in their vocal sac for development. Some species of frog will leave a 'babysitter' to watch over the frogspawn until it hatches.

Frog populations have declined dramatically since the 1950s: more than one third of species are believed to be threatened with extinction and more than 120 species are suspected to be extinct since the 1980s. Habitat loss is a significant cause of frog population decline, as are pollutants, the introduction of non-indigenous predators/competitors, and emerging infectious diseases.

Frogs are threatened by the inhumane pet trade. Every year, a variety of sources provides millions of animals to the wild and exotic pet trade. Animals are captured from their native habitat and transported to various countries to be sold as “pets”. Others are surplus animals from zoos or their offspring. Backyard breeders also supply exotic animals. The sellers of these animals often disregard state or local laws regulating private possession of exotics,  and the dangers, difficulties, physical and physiological needs of the animals they peddle. The suffering of the animals in the hands of unqualified and hapless buyers appears to be of no concern in the lucrative exotic pet trade. The animals also pose safety risks to humans.

Frogs are also victims of the animal entertainment industry, placed on display in zoos, aquariums, businesses and nature centers. They are removed from their natural habitat; depriving them of the ability to freely engage in instinctual behaviors. Both children and adults are desensitized to animal mistreatment by the animal entertainment industry. Even under the best of circumstances, captivity is cruel for wild animals. Confined to tiny areas and gawked at by crowds, animals in exhibits endure constant stress. They may suffer from temperature extremes and irregular feeding and watering. Without exercise, they become listless, their immune systems are weakened, and they become prone to sickness; many resort to self-mutilation in reaction to stress or boredom. Mental illness is rampant among confined animals. Torn from their families and deprived of all dignity, every part of their lives is controlled by their captors. While zoos may appear to be educational and conservation-oriented, most are designed with the needs and desires of the visitors in mind, not the needs of the animals.