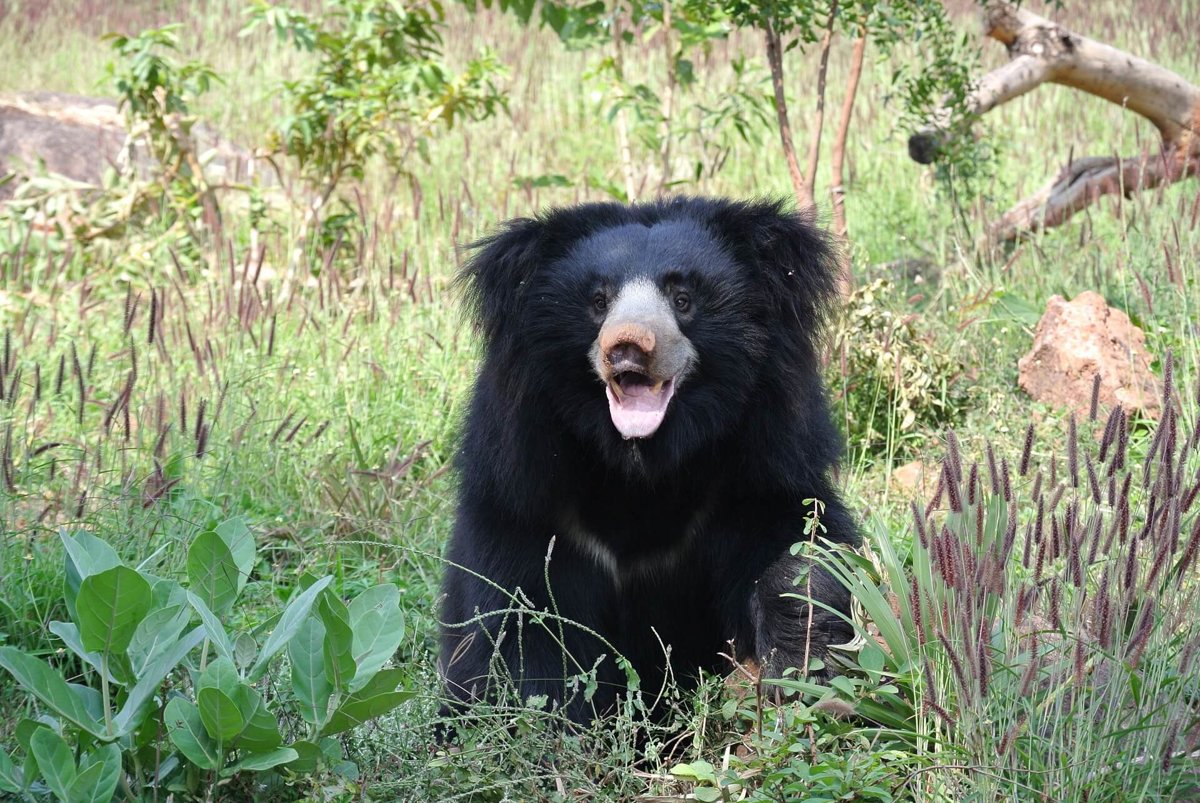 Sloth bears live in a variety of habitats including moist and dry forests and tall grasslands where shrubs, boulders and trees provide shelter. They can be found in Nepal, India and Sri Lanka. Sloth bears used to live in Bangladesh and Bhutan, but may be now be extirpated, or no longer present, in these areas. They are no longer found in Bangladesh, and possibly Bhutan.

When sloth bears were first discovered, they were believed to be related to sloths. Later it was revealed they are bears, but the confusing common name stuck.

Sloth bears have dusty-black, shaggy, coats. Their short-haired muzzles are pale. They have long, curved claws used to excavate ants and termites. A cream-colored “Y” or “V” shape is often found on their chests. Their fur does not have an undercoat, keeping them cool in their warm habitats and protecting them from insects.

Sloth bears have a good sense of smell. Their nostrils can completely close, protecting them from dust or insects when hunting termite nests and beehives. Their near-sight vision is similar to humans. Adults are 5 to 6 feet long, stand 2 to 3 feet high at their shoulders, and weigh 200 to 300 pounds.

Adult sloth bears are missing their top two front teeth which helps them to suck up insects. As a result of their diet of fruit and insects, their premolars and molars are smaller than those of other bears. Their feet are turned inward, increasing digging efficiency.

Sloth bears frequently make a variety of sounds. They grunt and snort when they pull down branches to get fruit, dig for ants and termites, or search for grubs and beetles. When threatened they stand on two legs, showing their clawed forepaws. Their large canines are used for defense. Predators of sloth bears include tigers, wolves, wild dogs, jackals, leopards and other bear species.

Sloth bears are myrmecophagous, feeding mostly on termites and ants, as well as grubs, beetles and other insects. They also eat fruit and flowers. Insects make up 95 percent of their diet when fruit is not available. They climb trees in search of honey, knocking honeycombs to the ground to collect from the forest floor. When food sources are scarce, they will eat carrion and farm crops.

Sloth bears adapt their sleep-wake cycle to their environment, depending on how many other bears, humans and predators share their area. They are usually active for 8 to 14 hours a day. They do not hibernate. While sloth bears are considered solitary, they may form groups when resources are plentiful.

In India, sloth bears breed from late spring to early summer. In Sri Lanka there is no seasonality to breeding. Mating takes place for several days to weeks and includes lots of noise. Embryos develop within 2 months, but gestation lasts for up to 7 months due to delayed implantation. Females dig dens or find a cave. They can be less interactive, agitated, disinterested in food, defensive and inactive.

Litters are usually 1 or 2 cubs, occasionally 3. Newborns weigh about 1 pound. They open their eyes in 2 to 3 weeks and begin to walk in about 4 weeks. Cubs nurse for around a year. They leave the den in 9 to 12 weeks, staying with their mother for 2 to 3 years. Sloth bear mothers carry their cubs on their backs for 6 to 9 months.

Sloth bears reach sexual maturity at 3 years of age, but usually do not give birth until later in life. They breed once every 3 years, or more if they have not given birth or if they have lost their babies.

Sloth bears are threatened by human activities and habitat loss.

They are hunted for body parts, to prevent crop damage and because they are considered dangerous.

Sloth bear cubs are used as "dancing bears" in India.

Sloth bears that attack or threaten to attack humans may be destroyed.