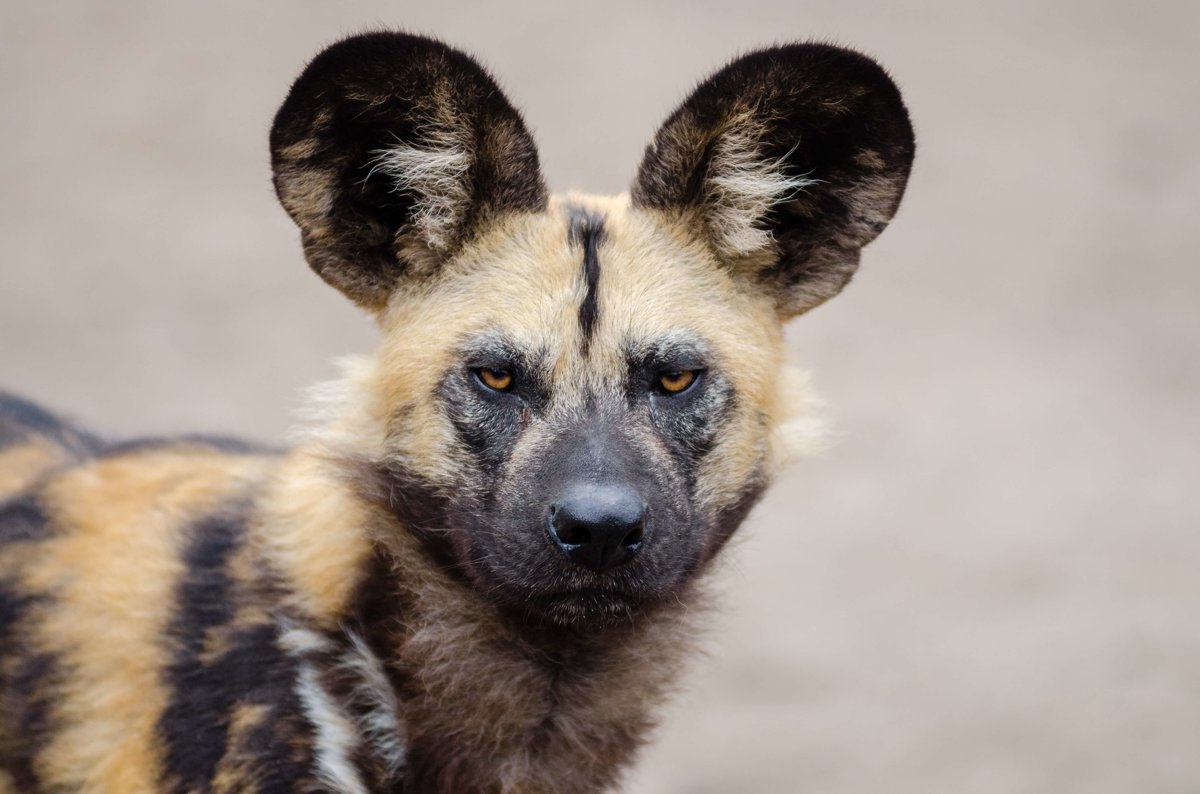 African wild dogs prefer the savanna and arid areas, usually avoiding forested areas, though forest packs do exist. The savanna provides open areas for hunting that do not obstruct their vision or impede pursuit of their prey. African wild dogs will venture into woods, scrub, and montane areas though in pursuit of prey.

African wild dogs are canines with long legs and only four toes per paw, unlike other dogs which have five toes on their forepaws. They have large, round ears. Their Latin name means “painted wolf” in reference to their mottled, irregular coat with patches of black, red, white, brown, and yellow fur. Each individual sports their own unique coat pattern.

African wild dogs form strong social bonds, stronger than lions and spotted hyenas. Solitary living and hunting are very rare. Permanent packs contain 2 to 27 adults and pups. Males and females have separate dominance hierarchies. Females are usually led by the oldest female. Males can be led by the oldest male, but they may be supplanted by younger males resulting in some packs having former elder male pack leaders.

The dominant African wild dog pair are usually the only ones allowed to breed. African wild dogs are unique in that males remain in the natal pack, while it is the females that disperse. Dispersing females join other packs, evicting some resident females related to the pack members. This prevents inbreeding and the evicted dogs find new packs and breed. Males very rarely disperse and are usually rejected by other packs containing males if they do.

In East Africa, African wild dogs have no fixed breeding season. In Southern Africa, breeding season typically takes place from April to July. Females are accompanied by a single male, keeping other members of the same sex away. Gestation lasts 69 to 73 days, with pregnancy intervals being around 12 to 14 months. African wild dogs have more pups per litter than any other canid, from 6 to 16 pups; an average of 10. One female can have enough pups to create a new pack each year. Since food sources to feed more than two litters would be very difficult, breeding is only allowed by the dominant female - who may kill pups of subordinates. Mothers stay in the den with the pups while the rest of the pack hunts. She will usually drive away other pack members who come near the pups until they are old enough to eat solid food, usually around 3 to 4 weeks old. Pups leave the den about 3 weeks after birth, and are continued to be suckled outside. They are weaned by 5 weeks of age, then fed regurgitated meat by pack members. At around 7 weeks old, the pups start to take on an adult appearance. When they are about 10 weeks old, the pack abandons the den and the pups join the adults in hunts. The youngest dogs eat first until they become yearlings.

African wild dogs often "rally" before hunting, though not every rally results in a departure. Departure is more likely when more pack members "sneeze", a short, sharp exhaling through the nostrils. If the dominant mating pairs sneezes first, the pack is more likely to depart. If a dominant dog initiates, three sneezes will guarantee a departure. When less dominant members sneeze first, if enough other dogs also sneeze then the pack will depart.

African wild dogs hunt in packs of up to 20 or more dogs. They hunt antelopes and larger animals, including wildebeests, especially if they are injured or ill. In East Africa the Thomson's gazelle is the favored prey, while in Central and Southern Africa impala, kob, reedbuck, springbok and lechwe are preferred. Grant's gazelle, zebra, warthog, oribi, duiker, ostrich, African buffalo, waterbuck, bushbuck, and smaller prey may also be hunted. African wild dogs supplement their diet with birds and rodents. Livestock hunting is rare.

African wild dogs are shot and poisoned by farmers who blame them for killing livestock, though the kills are usually made by leopards or hyenas.