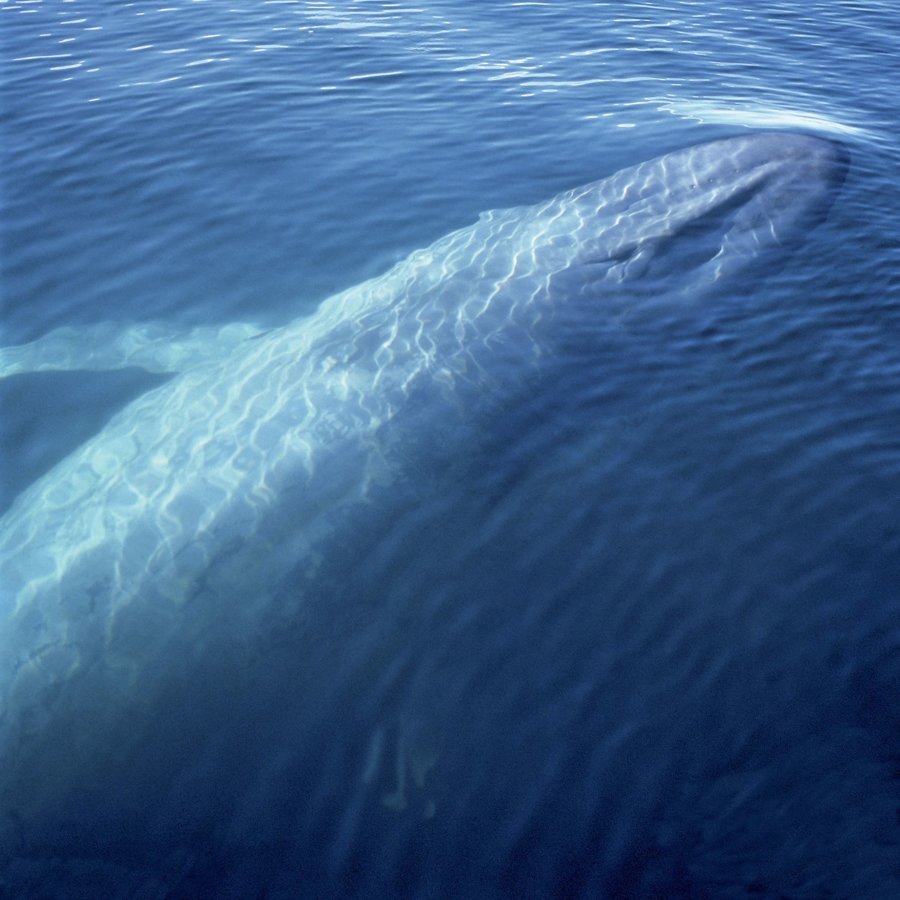 Blue whales are found throughout the world's oceans. The blue whale is the largest animal ever to inhabit the earth. This gentle giant has grayish-blue skin with light spots. It has about 300 to 400 baleen plates instead of teeth which it uses to strain food from the ocean water. Measuring 70 to 80 feet in length (the longest recorded length was 106 feet), blue whales can weigh as much as 90 to 150 tons. The female is larger than the male. The population of blue whales is dangerously low. They are endangered.

The lifespan of a blue whale is estimated to be 80 years. A blue whale can eat up to 7,715 pounds of krill (small shrimp-like organisms) per day. They swim 14 miles per hour (with bursts as fast as 30 mph) and feed at depths of less than 330 feet (but can dive as deep as 1,640 feet). Dives last from 10 to 20 minutes. Usually they travel alone or in small groups of two to four, although off the coast of California some groups as large as 60 have been seen.

Sexual maturity is reached between 5 to 10 years. Females give birth every two to three years to one calf. Gestation is 10 to 12 months; average calf is 23 feet long and weighs 4,440 pounds. A calf is fed by its mother for seven to eight months.

Blue whales once were considered too difficult to hunt because of their speed and size. With the introduction of factory ships and the harpoon gun in the 1920s, blue whales were hunted intensively. By the 1960s they were nearly extinct. Blue whales face threats from entanglement in fishing nets, pollution, and illegal whaling.


Due to the danger of extinction facing many whale species, the IWC voted to suspend all commercial whale hunting beginning in 1986. Despite this international agreement to stop killing whales for their parts, several countries continued to kill whales and sell their meat and parts, including Norway, Iceland and Japan.

A loophole in the ban on commercial whaling allowed for the killing of large and medium whales for "scientific purposes." The ban also doesn't cover smaller whales like pilot whales, dolphins and porpoises. Iceland and Norway take whales within their own waters, otherwise known as exclusive economic zones. Japan conducts whaling in international waters, including in a whale sanctuary in the ocean off the Antarctic coast, despite the ban.

Whales are most often killed using a primitive weapon called a harpoon. The harpoon has a grenade attached that explodes when the harpoon enters the body of the whale. It can take a very long time for some whales to die which causes additional suffering and fear in these gentle animals. There is no humane way to kill a whale.

Despite international pressure and the best efforts of grassroots movements to ‘save the whales’ around the world, whaling continues to be a danger facing whales and their future here on earth.