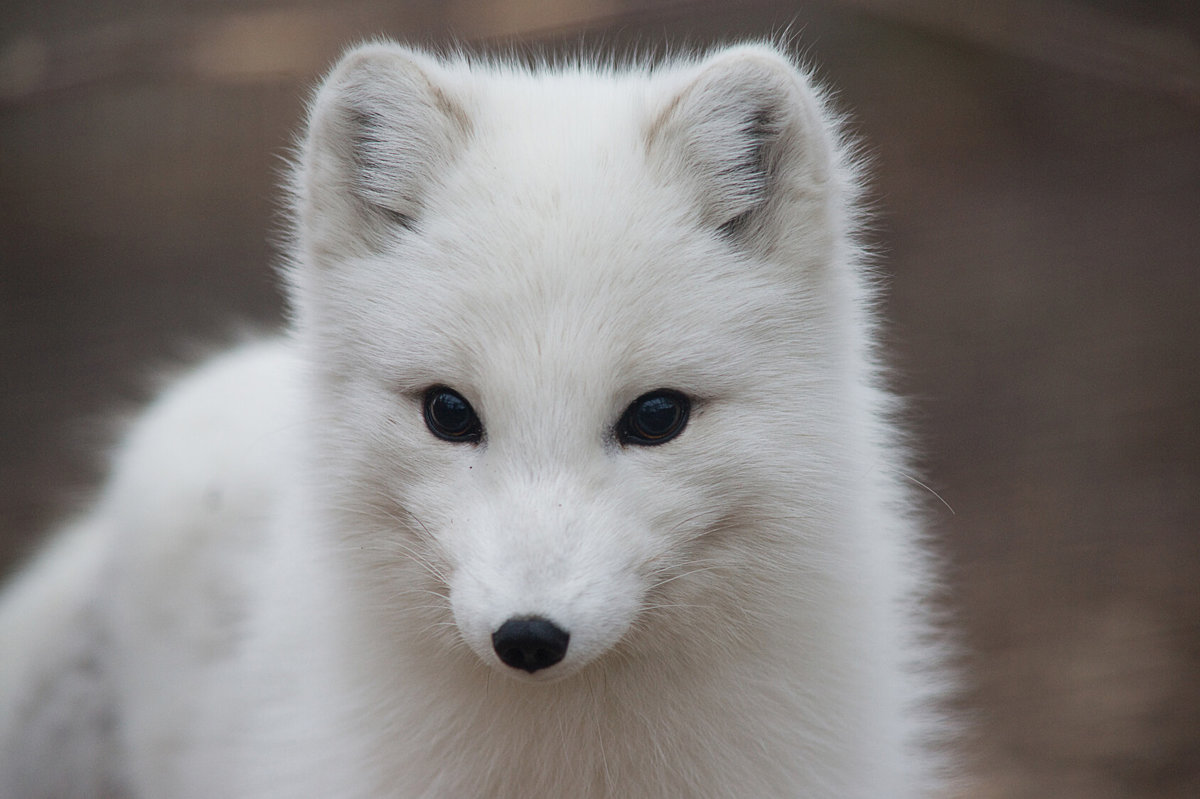 The arctic fox is the smallest member of canine family. There are 5 subspecies of arctic fox. Arctic foxes inhabit the tundra throughout the Arctic Circle. Arctic foxes can be found in Iceland, Greenland, Northern Europe, Russia, Canada and Alaska.
Arctic foxes have thick white fur during the winter and grey-brownish fur during the summer; offering seasonal camouflage. Arctic foxes have small ears, round bodies and short legs - which helps prevent loss of body heat in their cold ecosystems. The Arctic fox also curls its bushy tail around its body to keep warm. The paws of the arctic fox have thick fur to help in moving across snow and ice.
Arctic foxes live in underground burrows with as many as 100 entrances. These arctic fox burrows can be hundreds of years old and are passed on through the generations of arctic foxes. Arctic fox territories are about 9.6 square miles, but they look for food in a much larger range.
Arctic foxes feed on lemmings, fish, voles, sea birds and their eggs, and seal pups. They also take advantage of leftovers from polar bears. The number of arctic foxes in the wild often depends on the number of lemmings. A lot of lemmings means a lot of arctic foxes.
A fox is a member of any of 27 species of small omnivorous canids. The animal most commonly called a fox in the Western world is the Red Fox (Vulpes vulpes), although different species of foxes can be found on almost every continent. With most species roughly the size of a domestic cat, foxes are smaller than other members of the family Canidae, such as wolves, jackals, and domestic dogs.
Recognizable characteristics also include pointed muzzles and bushy tails. Other physical characteristics vary according to their habitat. For example, the Desert Fox has large ears and short fur, whereas the Arctic Fox has small ears and thick, insulating fur. Unlike many canids, foxes are not pack animals.
Foxes are solitary, opportunistic feeders that hunt live prey (especially rodents). Using a pouncing technique practiced from an early age, they are usually able to kill their prey quickly. Foxes also gather a wide variety of other foods ranging from grasshoppers to fruit and berries. Foxes are nearly always extremely wary of humans, and are not kept as pets. However, foxes are to be readily found in cities and domestic gardens.
Foxes do not come together in chorus like wolves or coyotes do. Fox families, however, keep in contact with a wide array of different sounds. These sounds grade into one another and span five octaves; each fox has its own characteristically individual voice. Fox noises can be divided, with a few exceptions, into two different groups: contact sounds and interaction sounds. The former is used by foxes communicating over long distances, the latter in close quarters.
"Wow-wow-wow": The most well-known vulpine noise is a sort of barking that spans three to five syllables. Conversations made up of these noises often occur between widely spaced foxes. As their distance decreases, the sound becomes quieter. A cub is greeted with the quietest version of this sound.
The alarm bark: This monosyllabic sound is made by an adult to warn cubs of danger. From far away it sounds like a sharp bark, but at closer range it resembles a muffled cough, like a football rattle or a stick along a picket fence.
Gekkering: This is a stuttering, throaty noise made at aggressive encounters. It is most frequently heard in the courting season, or when kits are at play.
The vixen's wail: This is a long, drawn-out, monosyllabic, and rather eerie wail most commonly made during the breeding season; it is widely thought that it is made by a vixen in heat summoning dog-foxes. Contrary to common belief, however, it is also made by the males, evidently serving some other purpose as well. This noise fits into neither the contact nor the interaction group.
THREATS TO ARCTIC FOXES
Foxes are at risk from habitat loss, inhumane trapping, hunting and vehicle deaths. Fox penning is an indefensible and barbaric blood sport in which dozens of dogs compete in a fenced-in area to chase - and sometimes rip apart - foxes and coyotes taken from the wild.
Foxes are senselessly tortured and killed to satisfy the dictates of fashion. Wild-caught fox fur is obtained by setting traps or snares. Once an animal is caught, it may remain in the trap or snare for several days starving or slowly strangling. Farm-raised fox fur comes from animals kept in tiny, filthy cages, deprived of adequate protection from the elements. As a result, animals develop stereotypical behavior, including pacing, head bobbing and self-mutilation. On fur farms, foxes are electrocuted by placing a metal clamp on the snout and forcing a rod into the anus, and then connecting the metal to a power source. Some animals are forced into bags or boxes and gassed with carbon monoxide or carbon dioxide.