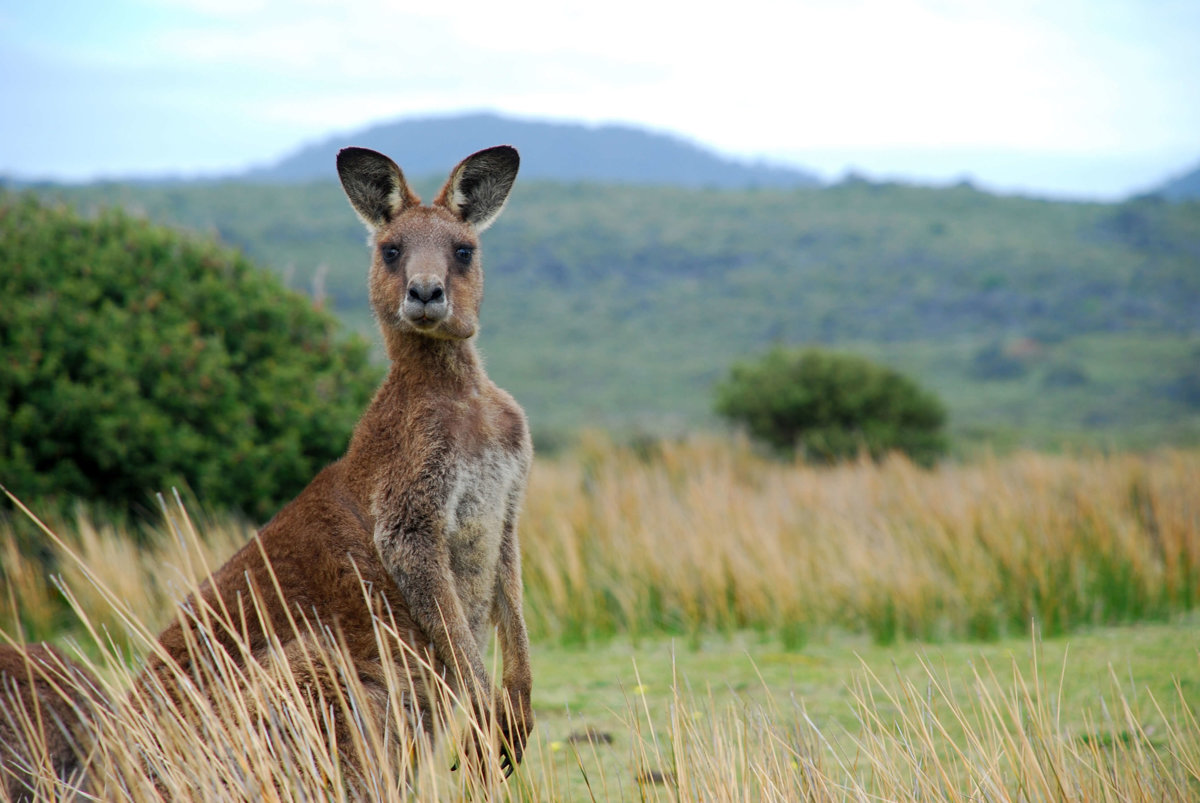 Kangaroos have powerful hind legs and short, thumbless forelimbs. Kangaroos can travel at speeds up to 30 miles per hour and can leap some 30 feet. Kangaroos use their long tails for balancing. Their bodies are covered in thick, coarse, wooly hair that can be shades of gray, brown or red. Kangaroos are marsupials, which means that females carry newborns, or "joeys," in a pouch on the front of their abdomens.

Kangaroos have developed a number of adaptations to a dry, infertile continent and a highly variable climate. As with all marsupials, the young are born at a very early stage of development after a gestation of 31 to 36 days. At this stage, only the forelimbs are somewhat developed, to allow the newborn to climb to the pouch and attach to a teat. In comparison, a human embryo at a similar stage of development would be about 7 weeks old, and premature babies born at less than 23 weeks are usually not mature enough to survive.

Red and gray kangaroos stand between five and six feet tall. Most weigh between 50 and 120 pounds, though some can reach 200 pounds. Female kangaroos are generally smaller than males of the same species. On average, kangaroos live in the wild for six to eight years. Kangaroos are found in Australia and Tasmania, as well as on surrounding islands. They live in varied habitats, from forests and woodland areas to grassy plains and savannas. They are grazing herbivores, which means their diet consists mainly of grasses. They can survive long periods without water.

Kangaroos live and travel in organized groups or "mobs," dominated by the largest male. A mob may have ten or more males and females. The dominant male (called a boomer) is based on his size and age. A boomer has temporary exclusive access to females in a mob for mating. A boomer may find himself wandering in and out of a mob checking out the females and intimidating the other males who try to mate with the females within the mob. Courtship behavior in most species of kangaroos includes the male "checking" the female's cloaca. The males are often rejected by the females for their smaller size, but in the case of a larger kangaroo, the female may instead simply move away.

Often, when the female is being checked, it urinates. The male kangaroo will then make a practice of sniffing the urine multiple times until it is satisfied, then proceed to the mating cycle. Studies of Kangaroo reproduction conclude that this ritual is typical for a male kangaroo to check if the female kangaroo is receptive to the male. The sexually aroused male follows the responsive female (she raises her tail). Tail scratching (a form of foreplay) can occur between the male and female. The arched tail is indicative that either one or both kangaroos are ready to mate. The male kangaroo may sometimes be found giving the female kangaroo a back rub before mating.

Kangaroos are shy and retiring by nature, and in normal circumstances present no threat to humans. Male kangaroos often "box" amongst each other, playfully, for dominance, or in competition for mates. The dexterity of their forepaws is utilized in both punching and grappling with the foe, but the real danger lies in a serious kick with the hindleg. The sharpened toenails can disembowel an opponent, and this is the fate of many dogs that wrestle with a boomer.

Usually, female kangaroos give birth to one joey at a time. Newborns weigh as little as 0.03 ounces at birth. After birth, the joey crawls into its mother’s pouch, where it will nurse and continue to grow and develop. Red kangaroo joeys do not leave the pouch for good until they are more than eight months old. Gray kangaroo joeys wait until they are almost a year old. A female kangaroo has the ability to freeze the development of an embryo until the previous joey is able to leave the pouch. The composition of the milk produced by the mother varies according to the needs of the joey. In addition, she is able to simultaneously produce two different kinds of milk for the newborn and the older joey who still lives in the pouch.

Threats to kangaroos include humans hunting them for meat and hides. Also, the introduction of domestic herbivores, such as sheep, cattle and rabbits, increases competition for many plants and may cause food scarcity in times of drought.

Millions of kangaroos are killed each year for the meat and leather industries. Kangaroos also suffer in the inhumane animal entertainment industry. Some are used for cruel "kangaroo boxing" acts, dragged around the country and forced to participate in boxing matches against people. These animals often suffer from poor diets, inadequate veterinary care and stress-induced disease. Some have even died while touring.

Others are kept on display, living a life in captivity. Even under the best of circumstances, captivity is cruel for kangaroos. Confined to tiny areas and gawked at by crowds, animals in exhibits and acts endure constant stress. They may suffer from temperature extremes and irregular feeding and watering. Without exercise, they become listless, their immune systems are weakened, and they become prone to sickness; many resort to self-mutilation in reaction to stress or boredom. Mental illness is rampant among confined animals. Torn from their families and deprived of all dignity, every part of their lives is controlled by their captors.