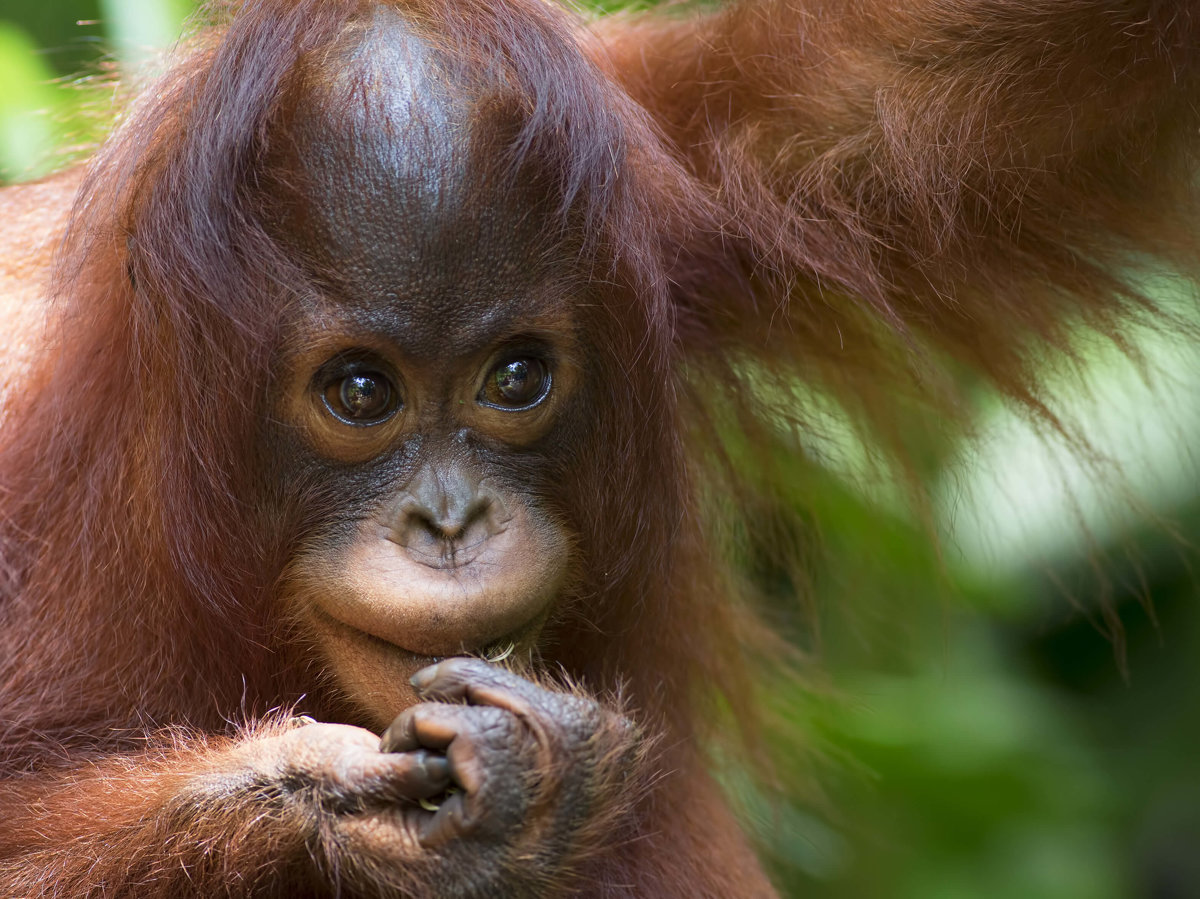 Orangutans have thin, shaggy, reddish-brown hair. They have long, powerful arms and strong hands that they can use to manipulate tools. Orangutans have the ability to make 13 to 15 different types of vocalizations.

Orangutans are only found on the islands of Sumatra and Borneo in Southeast Asia. An estimated 19,000 to 25,000 orangutans live in the wild. Another 900 live in captivity. In the wild, orangutans live for about 35 to 40 years.

Orangutans are arboreal creatures, which means they spend most of their lives slowly walking, swinging and climbing through dense rain forests. Orangutans feed mainly on fruits, especially wild figs. They also eat other kinds of vegetation, insects, small vertebrates and birds eggs.

Orangutans are solitary creatures. Adult males live primarily alone and only come together with females to mate. Adult females live with their young. Occasionally, adults will live with other adults for short periods in small temporary groups.

Orangutans spend most of their lives in a "home range" of 0.4 to 3.7 square miles. Females have a smaller home range than males. Sometimes the home ranges of individual orangutans overlap.

Females are able to give birth after age seven, but in the wild they generally do not mate until age 12. They give birth to one young at a time, which clings to its mother’s stomach until it is about a year old. When an orangutan reaches adolescence at about four or five years, it becomes more independent but may seek protection from its mother until it reaches seven to eight years.

The orangutan’s most serious threat is the destruction of forest habitat from excessive logging. Orangutans are highly endangered in the wild. Orangutan habitat destruction due to logging, mining and forest fires has been increasing rapidly in the last decade. Much of this activity is illegal, occurring in national parks that are officially off limits to loggers, miners and plantation development. There is also a major problem with the illegal trapping of baby orangutans for sale into the pet trade; the trappers usually kill the mother to steal the baby.

Female orangutans are also killed and their young are taken and illegally placed in circuses and zoos. Even under the best of circumstances, captivity is cruel for orangutans. Confined to tiny cages and gawked at by crowds, animals in exhibits and acts endure constant stress. They may suffer from temperature extremes and irregular feeding and watering. Without exercise, they become listless, their immune systems are weakened, and they become prone to sickness; many resort to self-mutilation in reaction to stress or boredom. Mental illness is rampant among confined animals. Torn from their families and deprived of all dignity, every part of their lives is controlled by their captors.

Animals used in film, television, advertising or as sports mascots are ripped away from their mothers as infants. They are forced to spend most of their lives in small cages. They often live alone, resulting in severe psychological anxiety. “Performing” is stressful, confusing and often torturous. Training methods may involve beating the animals, causing them to be constantly anxious and fearful. When the animals become too large to handle, they are often dumped at shoddy roadside zoos and other substandard facilities, where they spend the rest of their lives in small, barren cages—many in solitary confinement. “Retirement” from entertainment is a long life of misery for these highly intelligent and sensitive animals. The American Humane Association’s (AHA) “No Animals Were Harmed” seal of approval is extremely misleading. AHA does not monitor living conditions of animals off set, during pre-production training, or during the premature separation of infants from their mothers.