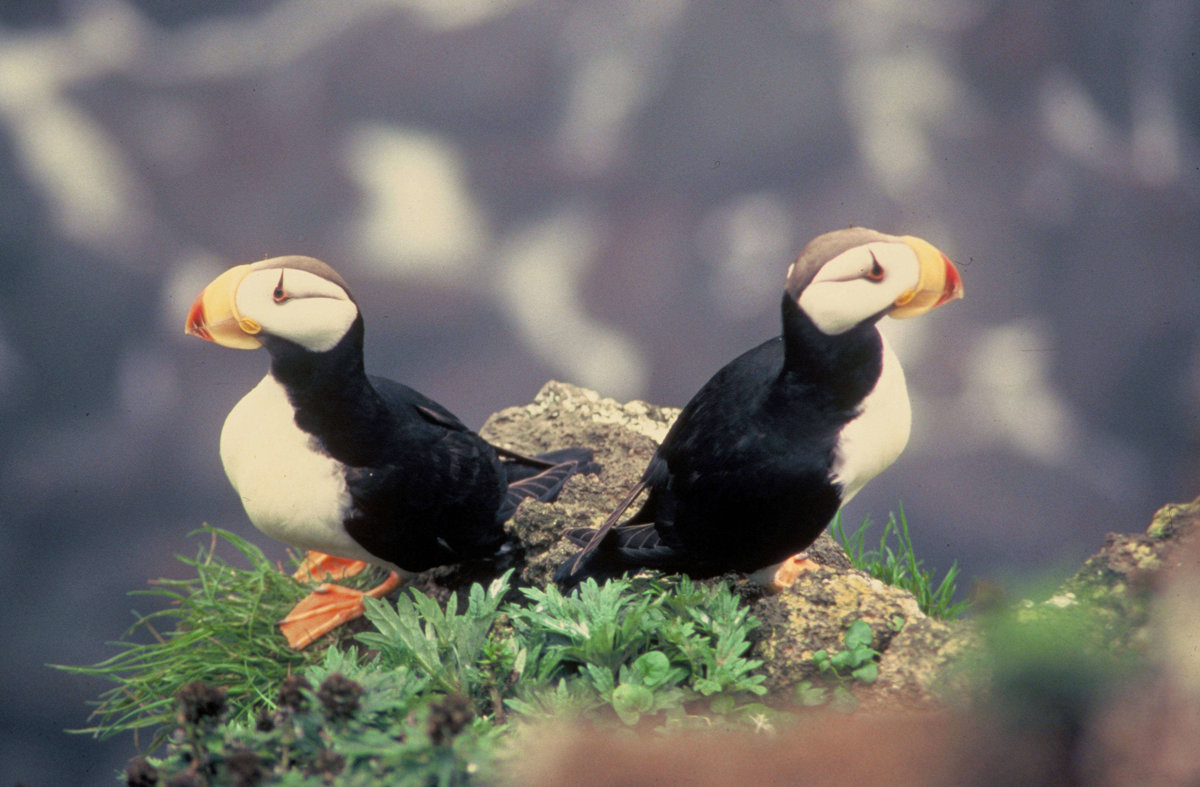 Puffins belong to the Alcid family, a group of diving birds that swim underwater using their wings for propulsion and their feet for steering. Two species, the horned puffin and the tufted puffin, live in the North Pacific Ocean, while the Atlantic puffin lives in the North Atlantic Ocean.

Puffins are short-winged, short-tailed, and stocky birds. They have black upper parts and white or brownish-grey underparts. Puffin heads have a black cap while the face is mostly white and their feet are orange-red. Puffin bills are large and colorful during the breeding season, while the colorful outer part is shed after the breeding season revealing a duller and smaller true bill beneath.

Puffins are vocal while at their breeding colonies, but they are silent when at sea. Puffins fly high above water. The puffin diet consists small fish, crustaceans and small squid. They dive underwater to catch their prey.

Puffins do not migrate over long distances, but make their home on the open waters over the continental shelf when their nesting time ends. This habit is referred to as nomadic.

Puffins begin their breeding season by gathering in large groups on the water. Puffins mate for life, and it is thought that these gatherings may reunite mated pairs. Puffins come to land only for nesting purposes. A breeding pair of puffins puts their energy into just one egg. This strategy aims for a very high success rate, one that must consider annual changes in food availability.

Some puffins dig burrows three to six feet deep in the tops of islands and headlands, while other puffins use rock crevices for their nesting sites. Puffins may employ grass and feathers for nesting material, or may just use the substrate at hand for their egg laying.

Both adults brood the egg. Upon hatching, parents provide the young chick with a steady diet of fish. Adults carry approximately 14 fish per day to their baby. When the puffin chicks fledge, they leave the nest at night in order to avoid predators. They flutter down to the water's edge alone and head for the open sea. They won't return to land again for two to three years, when they become breeding adults at the rookery.

Both bald eagles and peregrine falcons prey on puffins. To protect themselves from airborne attack, puffins form distinct flight patterns between nesting areas and feeding areas. They fly in large groups and in patterns that roughly resemble a wheel, making it hard for a bird of prey to find and attack an individual.

Puffins are threatened with habitat destruction and hunting. Puffins are hunted for their eggs, meat and feathers.

The Atlantic puffin is hunted in Iceland by a technique called "sky fishing", catching the puffins in large nets as they dive into the water.

Puffins are vulnerable to changes in the environment because their breeding populations are concentrated on a small number of sites.

The main threat to puffins is the changes in numbers and distribution of small fish.