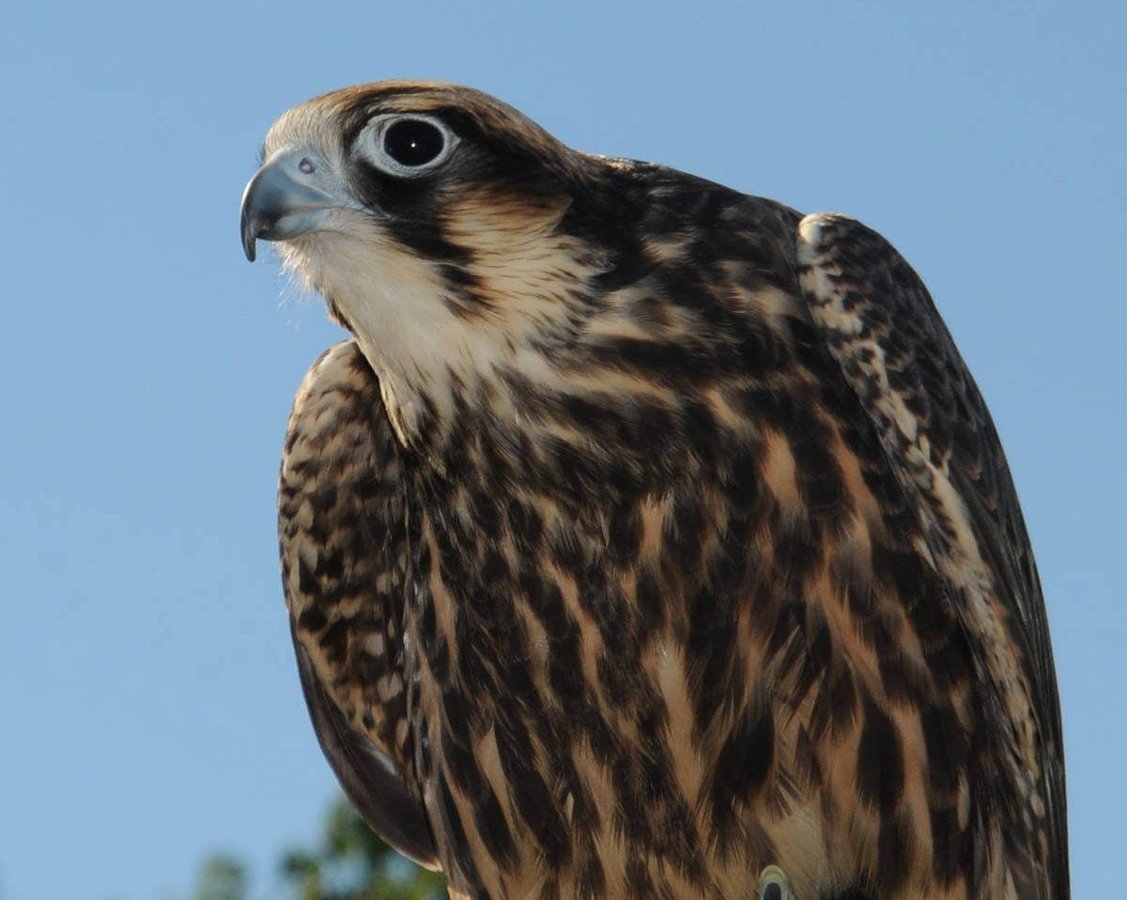 Peregrine falcons live mostly along mountain ranges, river valleys, and coastlines, and increasingly in cities. They are widespread throughout the entire world and are found on all continents except Antarctica. Peregrines in mild-winter regions are usually permanent residents, and some birds, especially adult males, will remain on the breeding territory. However, the Arctic subspecies migrate; tundrius birds from Alaska, northern Canada and Greenland migrate to Central and South America, and all calidus birds from northern Eurasia move further south or to coasts in winter.

A falcon is any of several species of bird of the genus Falco, such as the peregrine falcon, which are raptors or birds of prey. These birds have thin, pointed wings which allow them to dive at extremely high speeds. Peregrine falcons, the fastest birds on earth, are said to have reached speeds of up to 200 mph. Other falcons include the gyrfalcon, Lanner falcon, and the Merlin. Some small insectivorous falcons with long, narrow wings are called hobbies, and some which hover as they hunt for small rodents are called kestrels. The falcons are part of the family Falconidae, which also includes the caracaras, laughing falcon, forest falcons, and falconets.

Peregrine falcons feed almost exclusively on birds, such as doves, waterfowl and songbirds, but occasionally they hunt small mammals, including bats, rats, voles and rabbits. Insects and reptiles make up a relatively small proportion of their diet. On the other hand, a growing number of city-dwelling falcons find that feral pigeons and common starlings provide plenty of food.

Peregrine falcons breed at approximately two to three years of age. They mate for life and return to the same nesting spot annually. Their courtship includes a mix of aerial acrobatics, precise spirals, and steep dives. Females lay an average of three to four eggs. Scrapes are normally made on cliff edges or, increasingly more so, on tall buildings or bridges. They occasionally nest in tree hollows or in the disused nest of other large birds. The laying date varies according to locality, but is generally from February to March. The females incubate the eggs for twenty-nine to thirty-two days at which point the eggs hatch. Thirty-five to forty-two days after hatching, the chicks will fledge, but they tend to remain dependent on their parents for a further two months. The tercel, or male, provides most of the food for himself, the female, and the chicks; the falcon, or female, stays and watches the young.

Because of their high metabolic rates, peregrine falcons must consume more food in proportion to their size than most animals. To be efficient flyers, the digestive system of birds has to be both as light as possible and as efficient as possible. The need to keep weight as low as possible also means that, except perhaps prior to migration, there is a limit to the amount of fat the peregrine falcon can store. The respiratory system is also unique; the peregrine falcon maintains a one-way flow of air so that it can breathe while flying. The peregrine falcon also has cones in its nostrils to help regulate breathing at high speeds. Its circulatory system also needs to be exceptionally strong, because flying takes lots of oxygen. A bird's heart beats much faster than the human heart does, approximately 600-900 beats per minute.

The average life span of a peregrine falcon is approximately eight to ten years, although some have been recorded to live until slightly more than twenty years of age.

The peregrine falcon became endangered because of the overuse of pesticides during the 1950s and 1960s. Pesticide build-up interfered with reproduction, thinning eggshells and severely restricting the ability of birds to reproduce. The DDT buildup in the falcon's fat tissues would result in less calcium in the eggshells, leading to flimsier, more fragile eggs. In several parts of the world, this species was wiped out by pesticides. Eggs and chicks are often targeted by thieves and collectors.

Wildlife services around the world organized peregrine falcon recovery teams to breed them in captivity. The birds were fed through a chute so they could not see the human trainers. Then, when they were old enough, the box was opened. This allowed the bird to test its wings. As the bird got stronger, the food was reduced because the bird could hunt its own food. This procedure is called hacking. To release a captive-bred falcon, the bird was placed in a special box at the top of a tower or cliff ledge. Worldwide recovery efforts have been remarkably successful.

In the United States, the banning of DDT eventually allowed released birds to breed successfully. The peregrine falcon was removed from the U.S. Threatened and Endangered Species list on August 25, 1999. In 2003, some states began issuing limited numbers of falconry permits for peregrines due to the success of the recovery program. In the UK, there has been a good recovery of populations since the 1960s.