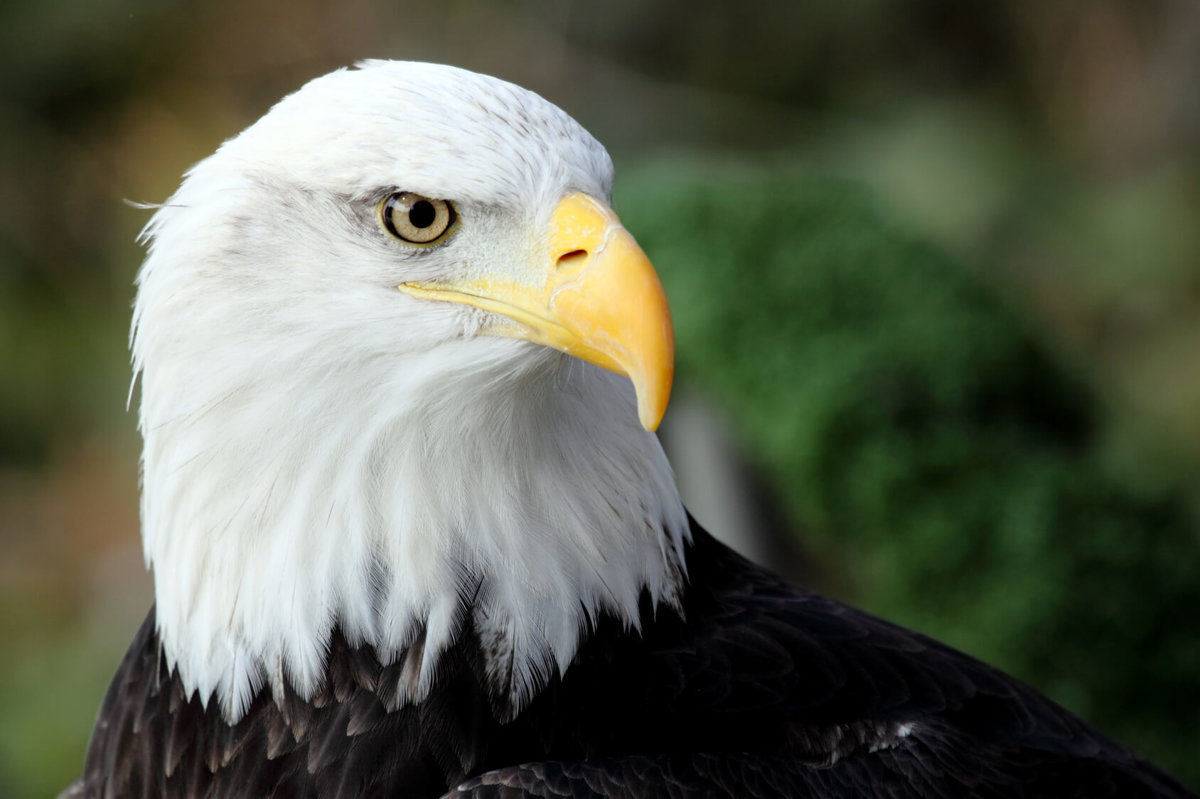 Eagle, common name for large predatory birds of the family Falconidae (hawk family), are found in all parts of the world. Eagles are similar to the buteos, or buzzard hawks, but are larger both in length and in wingspread (up to 7 1⁄2 feet) and have beaks nearly as long as their heads.
Birds of prey are birds that hunt for food primarily on the wing, using their keen senses, especially vision. They are defined as birds that primarily hunt vertebrates, including other birds. Their talons and beaks tend to be relatively large, powerful and adapted for tearing and/or piercing flesh. In most cases, the females are considerably larger than the males. Because of their predatory lifestyle, often at the top of the food chain, they face distinct conservation concerns.
Eagles differ from many other birds of prey mainly by their larger size, more powerful build, and heavier head and beak. Even the smallest eagles, like the booted eagle, have relatively longer and more evenly broad wings, and more direct, faster flight. Most eagles are larger than any other raptors apart from the vultures. Species named as eagles range in size from the South Nicobar serpent eagle, at 1.1 lb and 16 inches, to the 14.7 lb Steller's sea eagle and the 39 inch Philippine eagle. Like all birds of prey, eagles have very large hooked beaks for tearing flesh from their prey, strong muscular legs, and powerful talons. They also have extremely keen eyesight which enables them to spot potential prey from a very long distance. This keen eyesight is primarily contributed by their extremely large pupils which ensure minimal diffraction (scattering) of the incoming light.
Eagles build their nests, called eyries, in tall trees or on high cliffs. Many species lay two eggs, but the older, larger chick frequently kills its younger sibling once it has hatched. The dominant chick tends to be the female, as they are bigger than the male. The parents take no action to stop the killing.
Eagles are solitary birds that mate for life. The nest of twigs and sticks is built at a vantage point high in a tree or on a cliff in a permanent feeding territory and is added to year after year; the refuse of the previous nests decomposing beneath the new additions. Nests can become enormous, measuring up to ten feet across and weighing well over 1,000 pounds. The eaglets do not develop adult markings until their third year, when they leave parental protection and seek their own mates and territories.
The American bald, or white-headed, eagle (Haliaetus leucocephalus) is found in all parts of North America near water and feeds chiefly on dead fish (sometimes robbing the osprey's catch) and rodents. It is dark brown with white head, neck and tail plumage. The northern species (found chiefly in Canada) is slightly larger than the southern, which ranges throughout the United States. With only 417 known breeding pairs in the 48 contiguous states in 1963, the bald eagle population was dwindling alarmingly; a decade later they were placed on the endangered species list. In one of the greatest success stories in species recovery, conservation methods such as the banning of DDT and the prohibition against eagle hunting had by the beginning of the 21st century increased the breeding population in the lower 48 states to some 5,000 pairs. The bald eagle was removed from endangered status in 1995 and is now classified as threatened.
The golden, or mountain, eagle is widespread in the Northern Hemisphere, in the United States found mostly in the West. Unlike the bald eagle, it is an aggressive predator. In Asia it is trained to hunt small game. The adult is sooty brown with tawny head and neck feathers; unlike those of the bald eagle, its legs are feathered to the toes.
The gray and Steller's sea eagles are native to colder areas of the Northern Hemisphere; the king or imperial eagle to South Europe and Asia; and the rare monkey-eating eagle to the Philippines.
The harpy, or harpy eagle, of Central and South America, the largest of the hawks, eats macaws and sloths. It was named for the winged monsters of Greek myth and was called "winged wolf" by the Aztecs.
Eagles - impressive both in size and for their fearsome beauty - have long been symbols of royal power and have appeared on coins, seals, flags, and standards since ancient times. The eagle was the emblem of one of the Ptolemies of Egypt and was worn on the standards of the Roman armies and of Napoleon's troops. The American bald eagle became the national emblem of the United States by act of Congress in 1782. In folklore the eagle's ability to carry off prey, including children, has been exaggerated; even the powerful golden eagle can lift no more than 8 lb.
Eagles are classified in the phylum Chordata, subphylum Vertebrata, class Aves, order Falconiformes, family Accipitridae.
THREATS TO EAGLES
Eagles are threatened by habitat loss, pesticides, hunting, poisoning from carcasses of other animals poisoned by humans, wind farms, electrocution from power lines, and lead poisoning from eating ducks that have consumed lead shot.