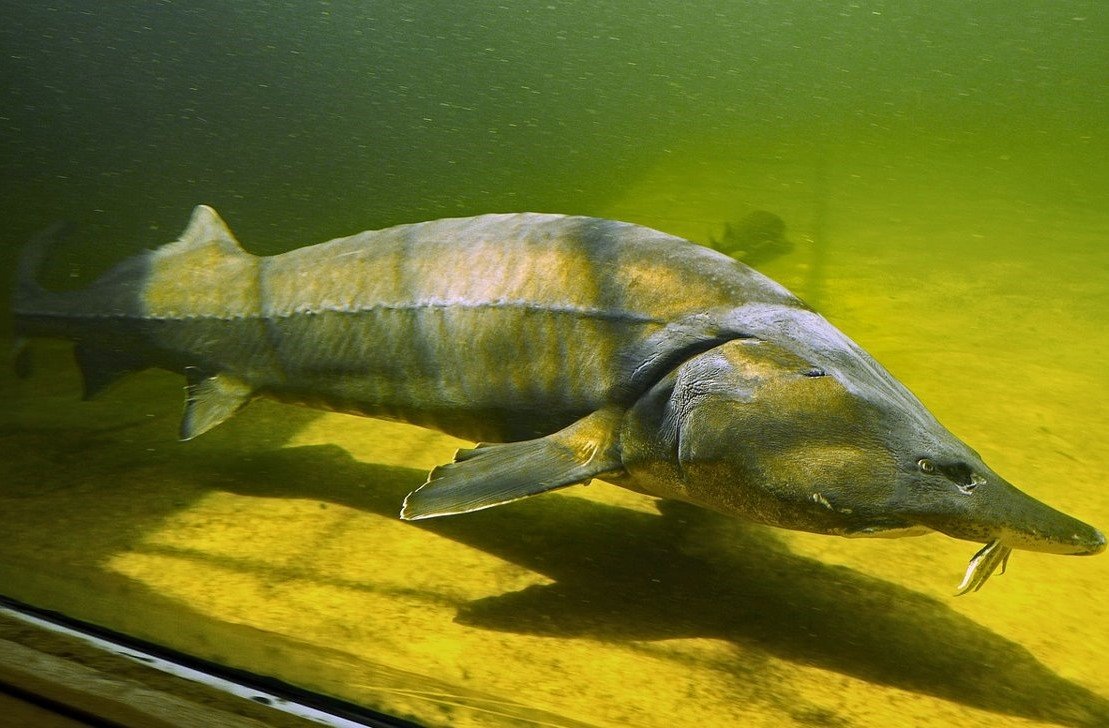 Shortnose sturgeon can grow to approximately 4.5 feet long and weigh up to 60 pounds. They are yellowish-brown and generally have a black head, back, and sides. Their bellies are white to yellow. They have five major rows of scutes and a protruding snout with four barbels (fleshy, whisker-like projections). Shortnose sturgeon are similar in appearance to Atlantic sturgeon, but can be distinguished by their smaller size, larger mouth, smaller snout shape, and scutes.

Historically, shortnose sturgeon were found in the coastal rivers along the East Coast of North America from the Saint John River, New Brunswick, Canada, to the St. Johns River, Florida, and perhaps as far south as the Indian River in Florida. Currently, shortnose sturgeon occur in 41 bays and rivers along the East Coast, reproducing in 19 of them. Today, the shortnose sturgeon is in danger of extinction throughout its range and is listed as endangered under the Endangered Species Act. The primary threats to this species are habitat degradation, water pollution, dredging, water withdrawals, fisheries bycatch, and habitat impediments (e.g., dams).

Shortnose sturgeon hatch in the freshwater of rivers and spend most of their time in the estuaries of these rivers. Unlike Atlantic sturgeon, shortnose sturgeon tend to spend relatively little time in the ocean. When they do enter marine waters, they generally stay close to shore. In the spring, adults move far upstream and away from saltwater, to spawn. After spawning, the adults move rapidly back downstream to the estuaries, where they feed, rest, and spend most of their time.

Shortnose sturgeon use their four barbels to search for food in the sandy, muddy bottom of rivers. They use a vacuum-like mouth to suck up this bottom-dwelling food, typically eating invertebrates such as insects, crustaceans, worms, and mollusks.

Spawning adults generally migrate upriver in spring, from January to April in the South, April to May in the Mid-Atlantic, and May to June in Canadian waters. After spawning, the adults typically move quickly back downstream to the lower river and estuaries. Juveniles move downstream and live in brackish waters for a few months.

Male shortnose sturgeon usually spawn every 1 to 2 years once they mature, while females spawn every 3 to 5 years. The number of eggs females can produce is correlated with age and body size and ranges from 30,000 to 200,000 per year.

Lifespan is correlated with how far north or south shortnose sturgeon live, with adults reaching up to 60 years in Canada, but likely only 10 to 20 years in the Southeast. Southern populations tend to grow faster and reach sexual maturity at an earlier age than other populations. For example, shortnose sturgeon mature in South Carolina and Georgia rivers around 2 to 5 years of age, in the Hudson River at 7 to 10 years, and in the St. Johns River (Canada) at 12 to 18 years.

Native American fishermen harvested shortnose and Atlantic sturgeon for their meat and eggs (roe) some 4,000 years ago, and sturgeon are credited as the primary food source that saved the Jamestown settlers in 1607. In the mid-1800s, Atlantic and shortnose sturgeon began to support a thriving and profitable fishery for caviar, smoked meat, and oil. For the most part, historical landings records failed to differentiate between shortnose sturgeon and the larger Atlantic sturgeon, making it difficult to determine historical trends in abundance for populations of either species difficult to determine. By the late-1800s, sturgeon were being over-exploited. In 1890, over 7 million pounds of sturgeon were caught in 1 year alone. In 1920, only 23,000 pounds of sturgeon were caught.

Today, the shortnose sturgeon is in danger of extinction throughout its range and is listed as endangered under the Endangered Species Act. The primary threats to this species are habitat degradation, water pollution, dredging, water withdrawals, fisheries bycatch, and habitat impediments (e.g., dams). The most significant threats to the species are dams that block access to spawning areas or lower parts of rivers, poor water quality, dredging, water withdrawals from rivers, and unintended catch in some commercial fisheries.

Habitats can be disrupted or lost because of various human activities, such as dredging, dams, water withdrawals, saltwater intrusion (often caused by groundwater pumping from freshwater wells or dredging), chemical contamination of sediments in rearing areas, and other development. Fisherman capture shortnose sturgeon while trying to catch something else. This is called bycatch and occurs primarily in gillnet fisheries; however, shortnose sturgeon have also been captured in pound nets, fyke/hoop nets, catfish pots, shrimp trawls, and even recreational hooks and lines.