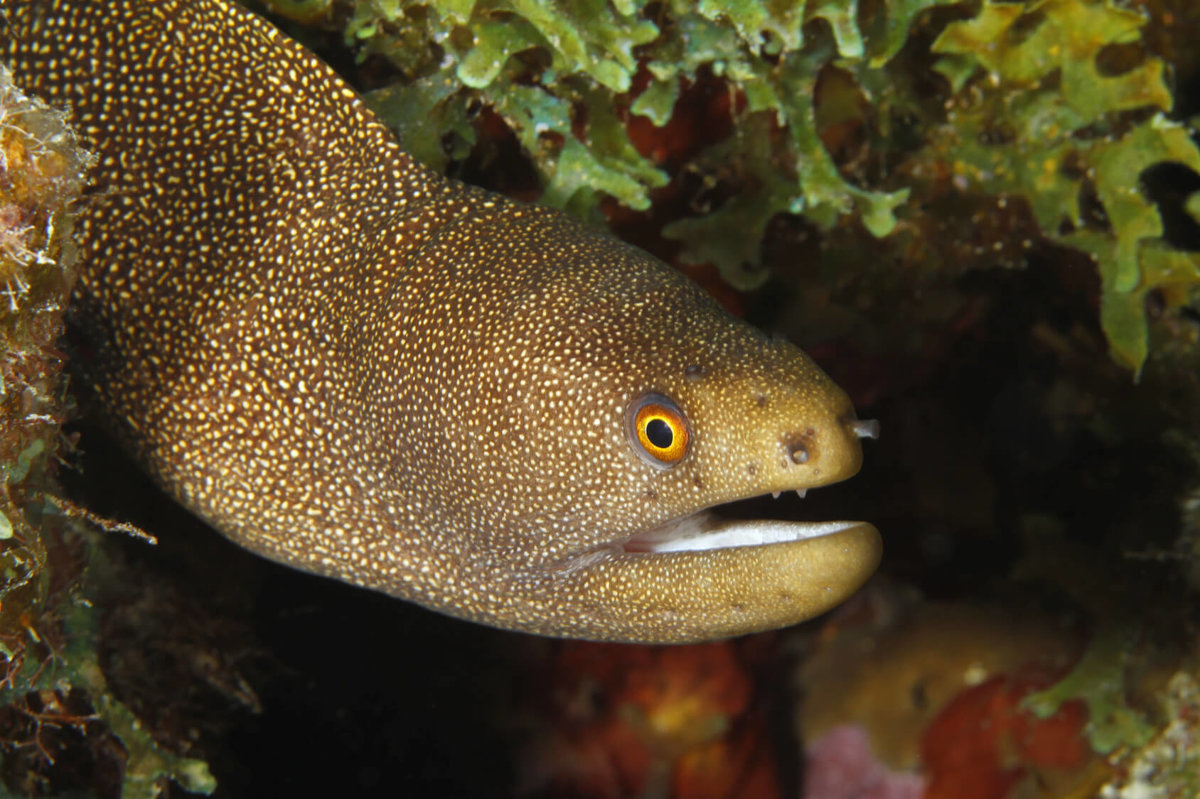 Although eels look like snakes, they are fish and belong to the order Anguilliformes, of which there are about 800 species. The term "eel" is also used for some other similarly shaped fish, such as electric eels and spiny eels, but these are not members of the Anguilliformes order.

The main species of true eels include American eels, European eels, moray eels and conger eels. Most eels are predators and feed on fish, snails, frogs, octopuses, crabs, lobsters and mussels. Eels feed during the night and rest during the day. These aquatic creatures rely on their excellent sense of smell to hunt for prey.

Eels are elongated fish, ranging in length from 2 inches in the one-jawed eel, to 13 feet in the slender giant moray. Adults range in weight from 1.1 oz to well over 55 lb. The heaviest true eel is the European conger. The maximum size of this species has been reported as reaching a length of 10 feet and a weight of 240 lb. Other eels are longer, but do not weigh as much.

Most eels live in the shallow waters of the ocean and burrow into sand, mud, or amongst rocks. A majority of eel species are nocturnal, thus are rarely seen. Sometimes they are seen living together in holes, or "eel pits". Some species of eels also live in deeper water on the continental shelves and over the slopes as deep as 13,000 feet. Only members of the Anguilla regularly inhabit fresh water, but they, too, return to the sea to breed.

Some eel species travel up to 4,000 miles to breed. The journey can take over seven months to complete, during which time the eels do not eat. During mating, eels open their mouths wide and wrap their bodies around each other for hours. They separate only after the female has laid her eggs, which are then fertilized by the male. After the eels breed, they die. It takes three years for an eel to become an adult.

Baby eels begin life as flat and transparent larvae, or leptocephali. Eel larvae drift in the surface waters of the sea, feeding on marine snow, small particles that float in the water. Eel larvae then metamorphose into glass eels and then become elvers before finally seeking out their juvenile and adult habitats. Freshwater elvers travel upstream and are forced to climb up obstructions, such as weirs, dam walls, and natural waterfalls.

Eels can reverse metamorphosis. As temperatures cool and eels make their way downriver in their migration to spawn in the ocean, they undergo physical changes to prepare their bodies for spawning and for the transition from freshwater to the marine environment. One of these changes is gut degeneration as the eels cease feeding and rely on fat stores to make the lengthy journey back to the sea where they spawn and die. Eels that are delayed, for example due to barriers or rises in temperature, and are unable to complete their downriver migration can actually reverse that physical change and regenerate their guts.

Eels move through water with an undulating motion. Eels can swim backwards and forwards, and can travel on land for short distances.

Pollution, changes in the environment, over-fishing, drainage and hydro development are the main threats to eels. Eels lose habitat and migration corridors when waters are obstructed by dams and other mechanisms. Because many eels are catadromous (living in fresh water but spawning in the sea), dams and other river obstructions can block their ability to reach inland feeding grounds. Since the 1970s, an increasing number of eel ladders have been constructed in North America and Europe to help the fish bypass obstructions.

Localized population declines are also attributed to mortality in hydropower plant turbines, degradation of current habitat, and overharvest. Freshwater eels and marine eels are threatened by the seafood industry, with some eel populations decreased as much as 99%.

European eel populations are threatened by a foreign parasite from East Asia which appeared in European eels in the early 1980s. Since 1995, it also appeared in the United States (Texas and South Carolina), most likely due to uncontrolled aquaculture eel shipments. In Europe, eel populations are already from 30% to 100% infected with the nematode. The parasite inhibits the function of the swimbladder as a hydrostatic organ. As an open ocean voyager, eels need the carrying capacity of the swimbladder (which makes up 3–6% of the eel's bodyweight) to cross the ocean on stored energy alone.

Eels, particularly the moray eel, are also victims of the pet trade and animal entertainment industry. Captured from their native habitat and transported to various countries to be sold as aquarium "ornamentals", the dangers, difficulties, physical and physiological needs of the animals appears to be of no concern in the lucrative pet trade and animal entertainment industry. Removed from their natural habitat they are deprived of the ability to freely engage in instinctual behaviors. Even under the best of circumstances, captivity is cruel for fish. Confined to tiny tanks, captive fish endure constant stress and boredom. With little room to exercise, they become listless, their immune systems are weakened, and they become prone to sickness; many resort to self-mutilation in reaction to stress or boredom. Mental illness is rampant among confined animals.