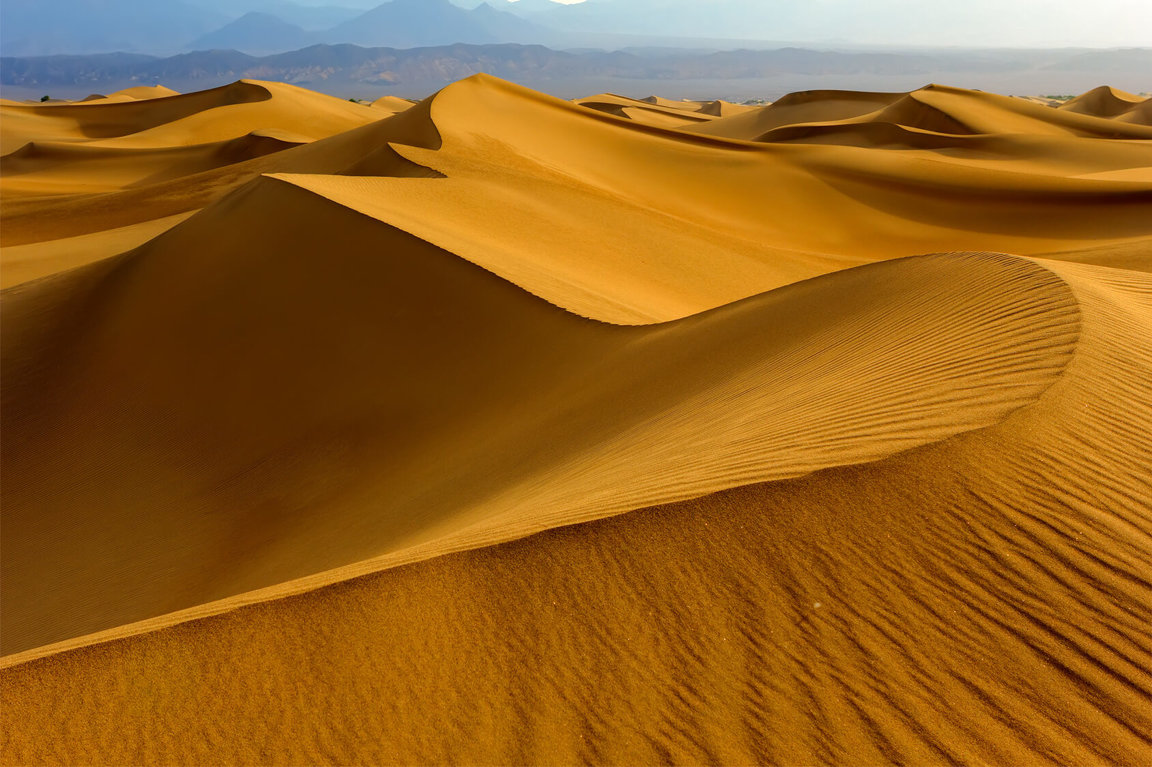 Deserts are classified by their geographical location and dominant weather pattern as trade wind, midlatitude, rain shadow, coastal, monsoon, or polar deserts. Former desert areas presently in nonarid environments are paleodeserts, and extraterrestrial deserts exist on other planets.
Trade Wind Deserts
The trade winds in two belts on the equatorial sides of the Horse Latitudes heat up as they move toward the Equator. These dry winds dissipate cloud cover, allowing more sunlight to heat the land. Most of the major deserts of the world lie in areas crossed by the trade winds. The world's largest desert, the Sahara of North Africa, which has experienced temperatures as high as 57° G, is a trade wind desert.
Midlatitude Deserts
Midlatitude deserts occur between 30° and 50° N. and S., poleward of the subtropical highpressure zones. These deserts are in interior drainage basins far from oceans and have a wide range of annual temperatures. The Sohoran Desert of southwestern North America- is a typical midlatitude desert.
Rain Shadow Deserts
Rain shadow deserts are formed because tall mountain ranges prevent moisture-rich clouds from reaching areas on the lee, or protected side, of the range. As air rises over the mountain, water is precipitated and the air loses its moisture content. A desert is formed in the leeside "shadow" of the range.
Coastal Deserts
Coastal deserts generally are found on the western edges of continents near the Tropics of Cancer and Capricorn. They are affected by cold ocean currents that parallel the coast. Because local wind systems dominate the trade winds, these deserts are less stable than other deserts. Winter fogs, produced by upwelling cold currents, frequently blanket coastal deserts and block solar radiation. Coastal deserts are relatively complex because they are at the juncture of terrestrial, oceanic, and atmospheric systems. A coastal desert, the Atacama of South America, is the Earth's driest desert. In the Atacama, measurable rainfall 1 millimeter or more of rain may occur as infrequently as once every 5-20 years. Crescent-shaped dunes are common in coastal deserts such as the Namib, Africa, with prevailing onshore winds.
Monsoon Deserts
"Monsoon," derived from an Arabic word for "season," refers to a wind system with pronounced seasonal reversal. Monsoons develop in response to temperature variations between continents and oceans. The southeast trade winds of the Indian Ocean, for example, provide heavy summer rains in India as they move onshore. As the monsoon crosses India, it loses moisture on the eastern slopes of the Aravalli Range. The Rajasthan Desert of India and the Thar Desert of Pakistan are parts of a monsoon desert region west of the range.
Polar Deserts
Polar deserts are areas with annual precipitation less than 250 millimeters and a mean temperature during the warmest month of less than 10° C. Polar deserts on the Earth cover nearly 5 million square kilometers and are mostly bedrock or gravel plains. Sand dunes are not prominent features in these deserts, but snow dunes occur commonly in areas where precipitation is locally more abundant. Temperature changes in polar deserts frequently cross the freezing point of water. This "freezethaw" alternation forms patterned textures on the ground, as much as 5 meters in diameter.