Prairie Grasslands: Lungs Of A Nation 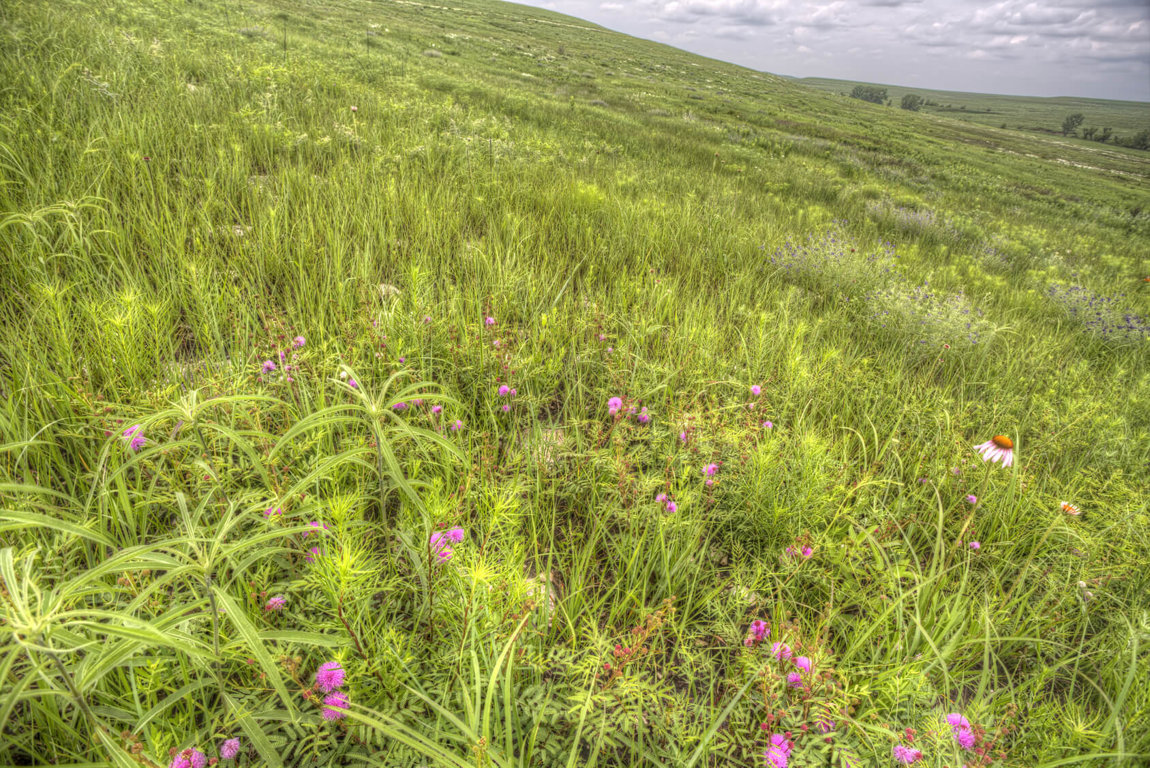 No other ecosystem in America removes as much carbon from the atmosphere as prairie grasslands. Some carbon that is produced by our giant industrial complex is recycled into the fertile soils that have become a breadbasket for the entire world.

The rolling acres of grassland stretching across the center of the United States are a classic American image. Early European settlers of this eco-region were so impressed by these endless grasslands that they compared them to the ocean, and named their wagons "prairie schooners" after large ships of the time. Less than 4 percent of this once vast prairie grassland survives today.

It is fascinating to note that 80% of prairie plant life is underground. Long tentacled root systems survive grazing, fire and flood to sprout each spring and renew an amazing cycle of life that, due to its low lying subtlety, is often over looked.

The prairie grasslands begin with the Great Plains at the eastern edge of the Rocky Mountains and extend all the way to the Appalachian Mountains in the eastern part of the country. The Rocky Mountains prevent moist air from moving over the Great Plains, and this "rain shadow" helps to keep the prairie grasslands extremely dry. However, it is not just the lack of rain that makes the prairie a harsh place to live. Twelve thousand years ago, retreating glaciers left behind a flat landscape open to extreme heat in the summer and extreme cold in the winter. The lack of geographic barriers or cover means that the wind runs rampant across the plains, leading to the "black blizzards" of the 1930s Dust Bowl and continuously endangering agriculture.

Despite these extremes, many plants and animals such as wildflowers, pronghorn antelope, mule deer, prairie dogs, and coyotes make their homes in the prairie grasslands. In addition, small, isolated wetlands dot the dry prairies, providing much-needed water and aquatic habitat for birds.

In the Northern Great Plains, these wetlands formed as the glaciers receded and left round, sunken areas behind them. Rain and groundwater fill these depressions during certain times of year, creating scattered wetland habitat known as "prairie potholes."

The Prairie Pothole Region in the Northern Great Plains contains 5-8 million small wetlands and some of the most important freshwater resources in North America. Bullrushes, sedges, and cattails grow on the edges of these potholes because they prefer standing water, and these plants in turn provide food and shelter for other species, such as birds. More than half of the migratory waterfowl in North America depend on prairie potholes for their survival.

Human activity has damaged many Great Plains habitats, primarily through agricultural and livestock activity in the region. For example, only 40-50% of the original prairie pothole wetlands remain intact and undrained today.

In addition to rapidly rising temperatures, patterns of rainfall have changed over the same time period so that the eastern areas of Montana, Wyoming, and Colorado have suffered a decrease in precipitation of 10%. Climate models predict that this increased drought in some areas will cause wetlands to relocate or disappear. Climate change will challenge wetlands in particular, because most wetlands in the plains occur where the effects of climate change are predicted to be most severe. These findings imply that climatically drier portions of the Prairie Pothole Region, including areas that migratory birds rely on, are especially vulnerable. However, higher temperatures and decreased precipitation will make life harder for the entire region.