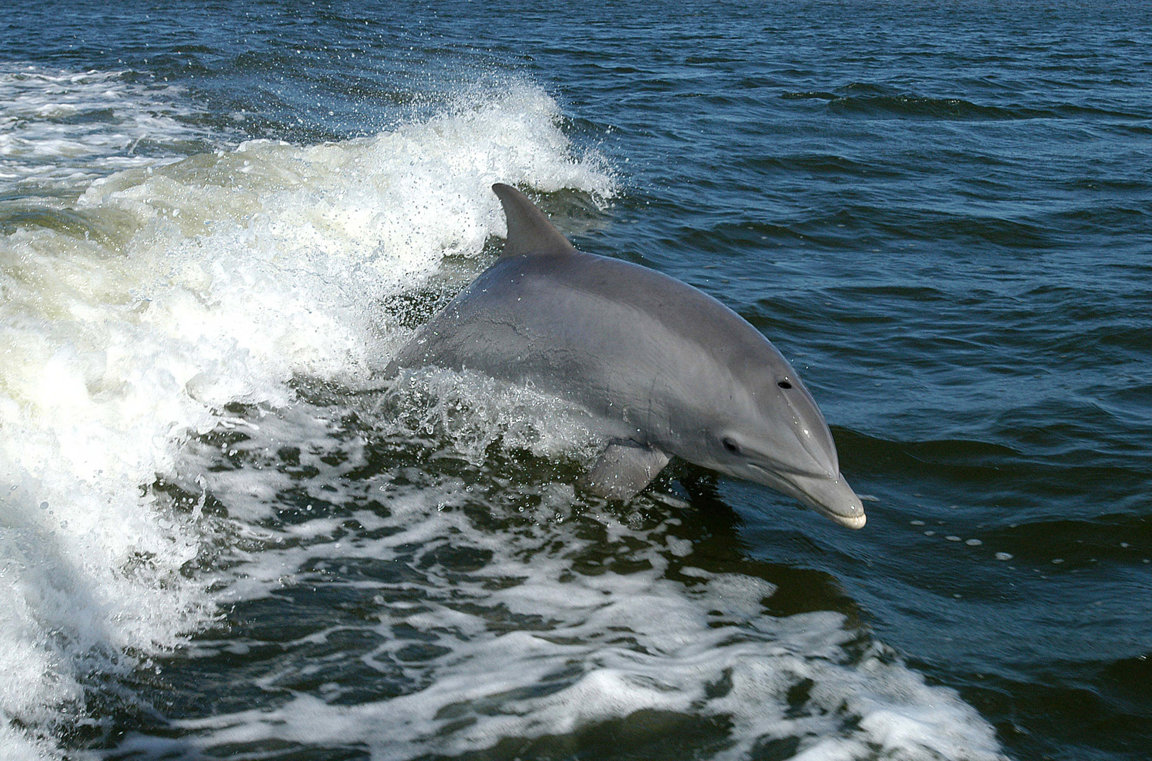 The dolphin is found in almost all seas and oceans of the world, and even some rivers. Their amazing intelligence, creativity, playfulness and complex culture captures the hearts and minds of humans around the globe. But these fascinating creatures are continuously under threat from human activities, including marine pollution, habitat degradation, hunting, low frequency sonar and fishing gear.

Many dolphin species face an uncertain future. The Amazon river dolphin and the Ganges river dolphin are critically or seriously endangered. The critically imperiled vaquita — the world’s smallest and most endangered porpoise — is being driven extinct, with only around 50 remaining.

Pesticides, heavy metals, plastics, and other industrial and agricultural pollutants that do not disintegrate rapidly in the environment concentrate in predators such as dolphins. Injuries or deaths due to collisions with boats, especially their propellers, are also common. Various fishing methods, most notably purse seine fishing for tuna and the use of drift and gill nets, kill many dolphins. In some parts of the world dolphins are killed in harpoon or drive hunts.

Dolphin brains are larger and, in some ways, more complex than human brains. They have such significant brain power it stops them from sleeping. Their sophisticated language allows them to trace other dolphins up to six miles away. They even have names for one another. They communicate with a variety of low sounds that humans cannot hear. They also use echolocation – sending sounds through water to bounce off objects to determine their shape, size and distance.

Dolphins form complex social groups. They crave physical attention and stroke each other. They use tools and pass their knowledge through a family line. They reason, problem-solve and comprehend ideas. They plan ahead. They have advanced math skills. They blow bubbles that vary in exact amplitudes to detect fish, then subtract values found with their echolocation to confirm the target.

Dolphins love to play. They follow ships and ride bow-waves like human surfers. They play catch, tag and other games with each other, and also enjoy playing with other animals. Dolphins swim onto the nose of humpback whales, who then raise themselves out of the water so the dolphins slide down their heads - both animals enjoy the game.

Threats From The Fishing Industry

The modernization of the fishing industry has resulted in far more fish caught annually than half a century ago. Sophisticated fishing techniques are responsible for the depletion of fish in the oceans by one-third. For the dolphin, whose main intake is fish, especially tuna, this scale of commercial over-fishing has come as a death knell.

Fishing gear continues to pose the most significant threat to dolphin conservation worldwide. Scientists estimate that each year more than 650,000 whales, dolphins, and other marine mammals are caught and killed in fishing gear. These animals are unintentional “bycatch” of commercial fisheries and either drown or are tossed overboard to die from their injuries. Fishing nets are now made of much tougher material, and dolphins getting routinely trapped in them is a common occurrence. One such menace is the gill-net, which when vertically hung trap the fish by their gills. In addition, trawl nets, driftnets, and longline gear are responsible for the lives of almost 60,000 dolphins each year. Many fishermen kill dolphins because the dolphins cause damage to their nets.

Dolphins are also hunted as a form of delicacy in parts of Asia, South America and Africa. Dolphins fall prey to "drive hunting", a hunting method where boats converge and crowd around the mammals driving them towards a beach or bay. This form of hunting has accounted for the lives of thousands of dolphins each year, a phenomena vividly depicted in the documentary "The Cove".

Massive dolphin hunts are being carried out to obtain dolphin teeth for use in wedding ceremonies. Thousands of dolphins have been killed by villagers in Fanalei where a single dolphin tooth is worth 70 cents.

Noise pollution in the form of ocean shipping, seismic testing for the purpose of oil and gas exploration, and underwater blasts carried out for military tests have had a serious effect on the dolphins acute sense of hearing. Chronic noise from human activities has a big impact on these animals, since it interferes with their acoustic signaling – increased background noise can mean animals are unable to hear important signals, and they tend to swim away from sources of noise, disrupting their normal behavior. Noise pollution could also be the reason for mass strandings of dolphins on various beaches each year.

Colossal amounts of waste entering the sea every day have also added to the dolphin's woes. Plastic bags, toxic chemicals and heavy metals are some of the pollutants that have accidentally become food for the mammals. Pesticides cause failure of immune systems in dolphins and affect their reproductive abilities. As a consequence, many dolphins have been found carrying cancerous tumors.

Climate change is another serious threat to the dolphins. The gradual warming of the seas and oceans are driving dolphins into cooler and deeper waters where food sources for the creatures are hard to come by. Habitats of certain species of dolphins found at the confluence of river and ocean waters (brackish waters) are being severely affected by rising ocean levels. Scientists question if dolphins can adapt to such changing conditions.

The story of freshwater dolphins or river dolphins is not very dissimilar to their cousins of the seas. While the Amazon river dolphin numbers in ten of thousands in their natural habitats of the Amazon and Orinoco river systems, they face dangers from tribesmen and fishermen with whom they have to compete for a depleting fish population. In countries like Colombia and Brazil, the dolphin is used as bait by those active in the mota catfish trade.

The Ganges river dolphin, once numbering nearly 100,000, have been reduced to under 2,000 now, making it a seriously endangered species. Its habitat, the Ganges River, flows through some of the mostly densely populated regions of the world, the Northern Indian states of Uttar Pradesh and Bihar. The existence of such human population results in direct killing, illegal construction of dams and barrages, rampant fishing, pollution occurring from open defecation by millions on a daily basis, and toxic material draining in from thousands of industrial units lining the river.

The Irrawaddy river dolphins, inhabitants of the Mekong and Irrawaddy river deltas of South-East Asia, is one species which is witnessing a turnaround of sorts. Hunted down ruthlessly over the years by the illegal wildlife trade, just about 90 of these unfortunate mammals exist now in a 120-mile stretch of the Mekong river in Cambodia. But the stunning discovery of nearly 6,000 Irrawaddy dolphins in the freshwater regions of the faraway Bangladeshi mangrove forests skirting the coast of Bay of Bengal has given this species hope.

Hundreds of dolphins are held in captivity. They are sentenced to a life of confinement deprived of normal social and environmental interaction. Confined to tanks as small as 24 feet by 24 feet wide and 6 feet deep, the reverberations from their own sonar bouncing off walls can drive them insane. Tanks are kept clean with chlorine, copper sulfate, and other harsh chemicals that irritate animals' eyes, causing many to swim with their eyes closed. They are often forced to learn tricks through food deprivation. Marine parks may withhold up to 60 percent of food before shows so that the animals will be "sharp" for performances. The stress of captivity is so great that some commit suicide.