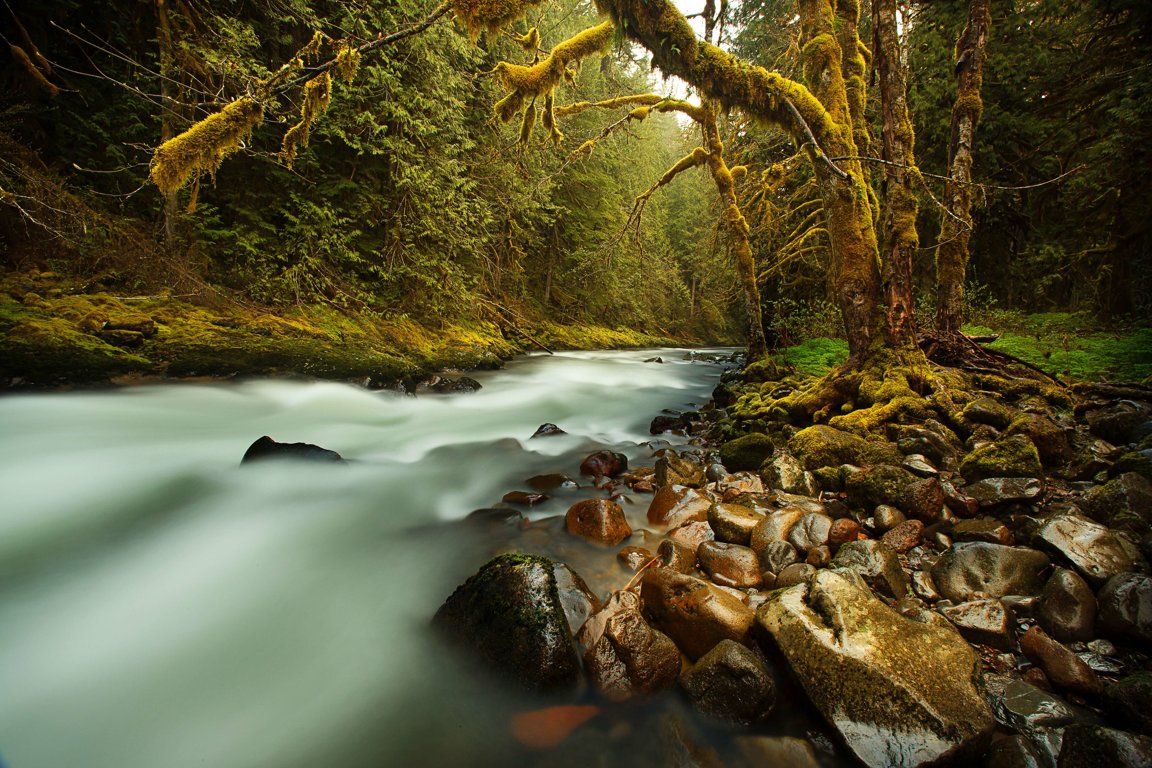 Forest biomes are dominated by trees and extend over one-third of the earth's land surface. There are three main types of forests—temperate, tropical and boreal. Each type has a different assortment of animals, climate characteristics and species compositions.

●  Temperate forests are in temperate regions of the earth including North America, Europe and Asia. They have four well-defined seasons and a growing season between 140 and 200 days. Rainfall takes place throughout the year and soils are nutrient-rich.
●  Tropical forests are located in equatorial regions between 23.5°N and 23.5°S latitude. They experience two seasons, a dry season and a rainy season. The length of each day varies little throughout the year. Soils in tropical forests are nutrient-poor and acidic.
●  Boreal forests make up the largest terrestrial habitat. They are a band of coniferous forests located in the high northern latitudes between about 50°N and 70°N. Boreal forests create a circumpolar band of habitat from Canada, to northern Europe, to eastern Russia. They are bordered by tundra habitat to the north and temperate forest habitat to the south.

Some of the wildlife that inhabit the forest biome include deer, bears, wolves, moose, caribou, gorillas, squirrels, chipmunks, birds, reptiles and insects.

The two main types of temperate forests are deciduous forests and evergreen forests.

Deciduous forests contain trees that loose their leaves in the fall. They are usually located in the Northern Hemisphere in parts of North America, Europe and Japan.

Evergreen forests are made up of trees that don't lose their leaves in the fall. They usually are found in warmer climates in South America, southern Europe, South Africa and parts of southern Australia. A more varied range of wildlife is often found in evergreen forests than deciduous forests.

Temperate forests once covered huge areas of the Northern Hemisphere. As a result of logging and deforestation for agriculture, most forests are already gone.

Coniferous forests are located in the far north, many within the Arctic Circle. They are predominantly home to conifers, the toughest and longest living trees. Conifers grow close together resulting in dense forests that are sheltered.

Boreal coniferous forests stretch across the far north from Siberia, through Northern Europe, to Alaska, covering a distance of 6 million square miles. They are 1,000 miles wide in places. A large proportion of boreal coniferous forest is in the Arctic Circle, where plants and animals are well adapted to cold temperatures.

Rainforests are home to more than 50% of all living species on the planet. They receive an abundance of rain and contain extremely diverse wildlife. The two main types of rainforest are tropical rainforests and seasonal rainforests.

Tropical rainforests are close to the Equator where the climate is warm, providing ideal conditions for plants. 170,000 of the world’s 250,000 known plant species are found in tropical rainforests. They have various layers of canopy providing a wide variety of habitats for animals. A large collection of tall tree species is made possible by a constant water flow. Tropical forests are home to smaller primates and bird species than seasonal rainforests.

The broad array of animals found in rainforests include mammals, reptiles, birds and invertebrates. Mammals include primates, wildcats and tapirs. Reptiles include a variety of snakes, turtles and lizards. Numerous species of birds and insects live in rainforests. Fungi is common, which feed on the decomposing remains of plants and animals. Many animal species have adopted a tree-dwelling (arboreal) lifestyle in the rainforest. Food is abundant in the forests due to the amount of water and plant life.

Numerous plant and animal species are rapidly disappearing from rainforests due to deforestation, habitat loss and other human activities. Around 50 million people live in rainforests. Their habitat and culture is also threatened as an alarming amount of rainforest land disappears each year.