Lemurs: Spirits Of The Night 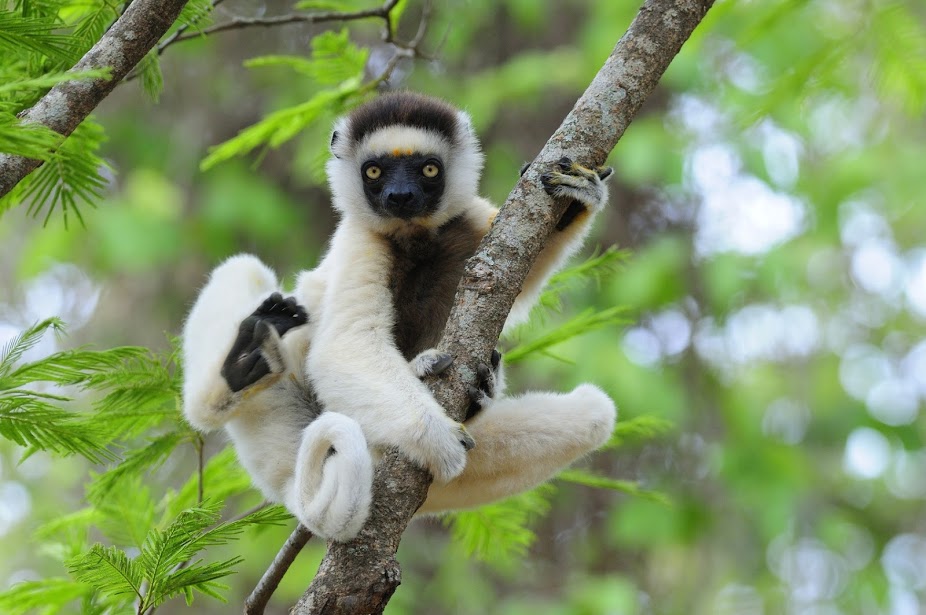 About 600 miles off the coast of South-Eastern Africa lies the fourth largest island in the world, Madagascar. Famed for its lush green tropical forest, misty highlands, temperate climate and 3,000 miles of coastline, this jewel in the Indian Ocean is home to one of the most exotic creatures in the world – the lemurs.

Madagascar's 160 million years of isolation as a landmass has shaped an ecosystem and habitat that's perfectly suited and unique to the existence of lemurs. The lemurs themselves have been on the island for over 40 million years, giving them distinctive features quite different from any other animal in the world. In appearance, lemurs are a mixture of many animals – squirrel, cat, dog, and monkey. Some have faces that closely resemble raccoons or skunks and have many characteristics of apes. But when there are 101 species of an animal, looks and behavioral patterns vary widely.

Lemurs are basically nocturnal creatures and move about at night. "Lemures" in Latin means "Spirits of the night". Lemurs are herbivorous animals and their main diet is plants. 55 percent of the island's plant life constitute food for lemurs. Black lemurs, for example, eat leaves, flowers and fruit. So do the inri, another species of lemur. Insects also form an important part of the diet, especially for the smaller species of lemur. Greater bamboo lemurs live off the inner pith of giant bamboo found in forest pockets of the eastern highlands.

Among the existing species, the diademed sifaka and the indri lemurs are the largest and can weigh up to 15 lbs at the most. The smallest, the pygmy mouse lemur, weighs only 1 oz, making it the tiniest primate in the world.

Man first landed in Madagascar as recently as 2,000 years ago. The fate of lemurs has been threatened ever since. Archaeoindris fontoynontii, the giant lemur weighing as much as 440 lbs, was among the first species to become extinct. Once found virtually all over Madagascar, lemurs are now ensconed into just 20 percent of their original habitat, most of it in the central and east coast highlands. According to a recently released report of the IUCN (International Union for Conservation of Nature) Red List of Threatened Species, of the 101 species of lemurs, 22 are on the brink of extinction, 48 are endangered, and 20 are vulnerable.

The threats to the lemur's survival is similar to many endangered animals of the world - a burgeoning human population's hunger for more land which translates into more clearing of forests for agricultural purposes. Poverty-stricken Malagasys have resorted to burning down the nation's scarce forests to grow crops. Hunger has also led to the hunting of lemurs for meat, an unusual occurrence until a few decades ago.

Political turmoil also has taken a toll on the laws and mechanisms that safeguard and conserve forest resources. Armed gangs, working in cahoots with the timber mafia, have taken advantage of the political vacuum to pillage protected forests for ebony and rosewood. Over $100 million dollars of wood stolen in this manner have made their way to China for use in furniture. The immediate fallout is on the habitat of the lemur.

Despite laws protecting the lemurs, the creatures are not just hunted as a delicacy, but for superstitious reasons too. The aye-aye lemur, a 5.1 lbs animal, is considered a harbinger of death by some natives and is quickly exterminated if spotted in the vicinity of their villages.

The ring-tailed lemur is among the most well-known and loved lemur species. It is at the top of the list of the illicit pet trade industry. Found mostly in the southern fringes of Madagascar, this beautiful animal, with an off-white coat and a long zebra-striped tail, is sold to hoteliers and tourists for a ridiculously low sum of $2. Being a popular animal, it is also inhumanely kept in zoos all around  the world for human entertainment and profit.

The black lemur is another highly endangered species. There are about 10,000 of them in the North-western parts of Madagascar and in some of the islands off the North coast. The black lemur stands about 38 inches tall and weighs about 5 lbs. The black lemur faces common threats like other lemur species. Man's proximity has brought this species into confrontational situations where they have been killed for raiding crops.

Superstitions sometimes can work in favor of the lemurs. For example, the inri is believed to be carrying souls of ancestors. Villagers refrain from killing them.

But lemurs desperately need protection. Loss of habitat can have serious consequences for the breeding or reproduction of lemurs. The lemurs have very short mating and birth windows that are synchronized to seasons when food availability is at its peak. The female vagina opens up for a very brief period of the day, leaving a small window for reproductive activities. High levels of energy exhaustion during such periods account for high mortality among adult lemur females.

Despite protests from local villages, the Ranomafana National Reserve Park was created by the forest authorities of Madagascar. The Ranomafana reserve is a 15 km strip of virgin forests not far from the east coast setup primarily to protect the lemurs inhabiting it. Similarly, nearly 20 national parks have sprung up in the last few decades – especially along the entire eastern and southern coastal belts – to protect endangered species in those sensitive places where they may come into direct contact with human habitation.

The blue-eyed black lemur, an inhabitant of the sub-tropical moist and dry forests in the north-western tip of Madagascar, is a beneficiary of serious conservation measures. Thanks to the endeavors of organizations that have put into place natural resource management and ecological research programs to monitor and mitigate the loss of valuable forest resources in that region, the rare blue-eyed species of lemur is on a comeback trail and finds itself out of the IUCN’s list of the 25 most endangered primates on the planet.

But serious challenges remain. In addition to rapid habitat loss, climate changes may pose the biggest threat to the survival of lemurs. A study found that 60 percent of the 57 species examined may find their habitat reduced by an alarming two-thirds in the next seventy years solely due to climate change.