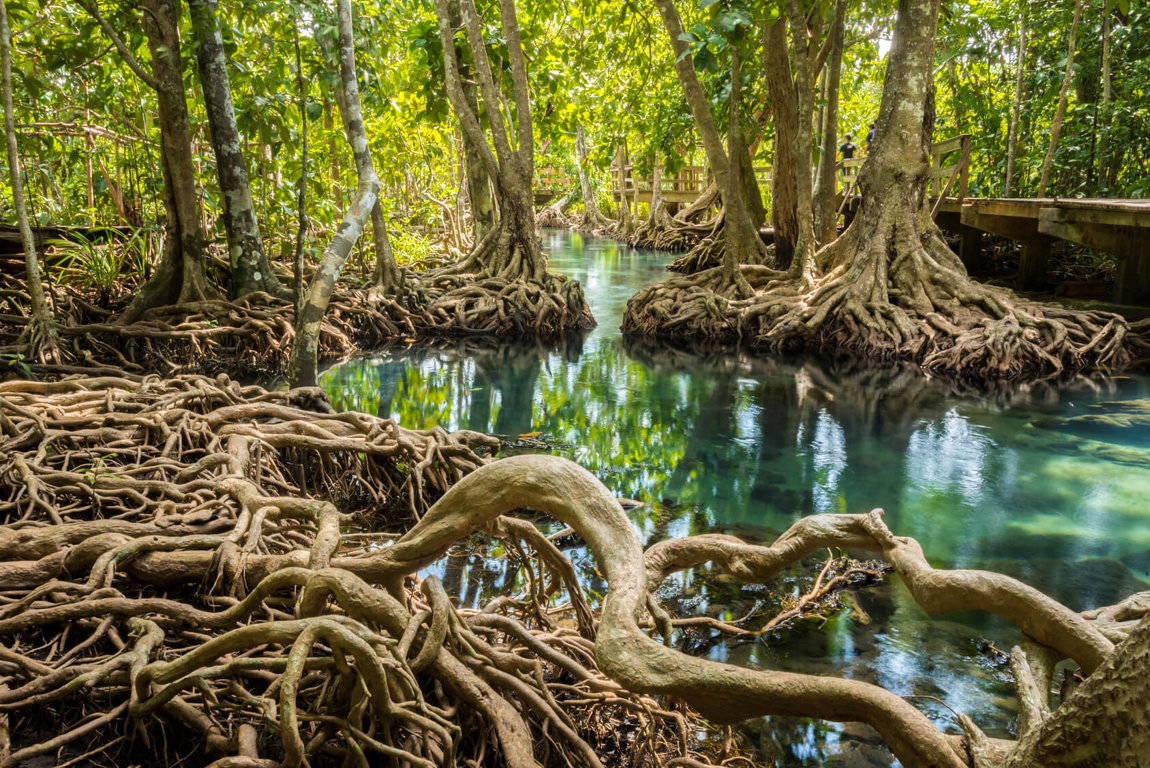 Mangrove forests are made up of trees that live along tropical and subtropical intertidal shorelines. The trees are easily recognizable by their dense mats of thick, stick-like roots that rise out of the mud and water. These roots (called “prop roots”) slow the movement of water as the tides flow in and out, allowing sediments to settle onto the muddy bottom.

There are approximately 80 species of mangrove trees, all with varying degrees of tolerance to tidal flooding, soil salinity, and nutrient availability. This creates zones of mangroves with the most salt-and water-loving species, such as the red mangrove, growing on the shoreline and in the water. The least salt-tolerant, such as the white mangrove, lives on higher ground where they are rarely inundated by tidal waters.

Because they cannot tolerate freezing temperatures, mangroves are only found in tropical and subtropical climates.

Equivalent to salt marsh wetlands in temperate zones, mangroves perform several of the same functions and provide many of the same benefits, making them extremely important habitats for both human and ecological communities.

- Nursery for juvenile fish
- Habitat for oysters, crabs and shrimp, and birds
- Carbon sequestration and storage, decreasing the effect of global warming
- Stabilize shorelines and prevent erosion
- Buffer against hurricanes and tropical storms
- Provide nutrients to neighboring ecosystems such as coral reefs and sea grass beds

Mangrove Forests Are Suffering and So Are We

Unfortunately, mangroves are highly threatened ecosystems. It is estimated that at least half of the world’s mangroves have been lost and continue to be destroyed at a rate of about one percent per year.

Among the stressors are:

The loss of mangrove forests means the loss of the benefits that these systems confer. Mangrove deforestation reduces the amount of carbon sequestration possible, and releases carbon stored in the soils, exacerbating the greenhouse gas effect. Coastal communities are left unprotected from the ravages of hurricanes and tropical storms, often causing millions and sometimes billions in damage to their buildings and infrastructure, not to mention the loss of life.

Deforested shorelines are subject to greater rates of erosion and are unable to keep pace with sea level rise. Nearby coral reefs, already heavily impacted by warming sea surface temperatures, ocean acidification, disease and overfishing, suffer further pressure from sedimentation when mangroves are removed and can no longer filter the water.