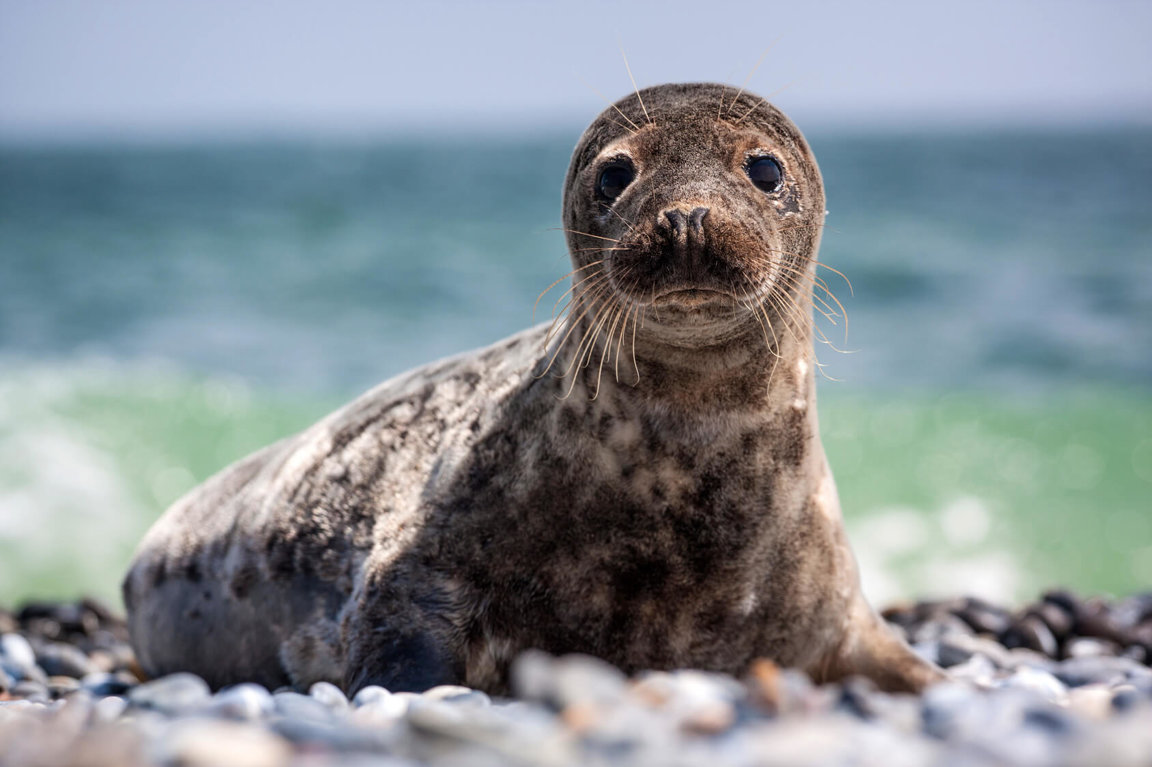 The image of seals and sea lions conjures up thousands of these creatures basking on the rocky beaches of the U.S. West coast, Australia and Tasmania and ice floes of the Arctics. While similarities between these two amphibious mammals seem apparent, there are some inherent differences.

The pinniped, the family to which these two belong, consists of the phocidae or true seals and otariidae or sea lions. True seals are believed to have descended from a terrestrial creature closely resembling the weasel, while the sea lion traces back its origins to a bear-like animal. True seals fall in the category of earless seals because they lack the external ear flap which sea lions, or "eared seals", have. The sea lions have much larger front and hind flippers than the seals, which allow far more locomotion. So while on land the seal slushes forward at snails' pace on its belly, the sea lion virtually gallops forward thanks to it bigger flippers. Like most aquatic mammals, both the seal and sea lion are expert swimmers.

All pinnipeds, like many other wildlife species, have not been spared the ravages of mankind. The hunting of millions of seals for their meat, blubbers and pelts reduced their numbers significantly. Later they were killed by fishermen who over-harvested fish, then blamed the seals for depleting fish stocks in the ocean.

Extensive commercial fishing has harmed pinnipeds in more ways than one. Reduced food, resulting from irresponsible fishing practices, is suspected to be behind a declining pinnped population. Seals and sea lions also get entangled in fishing gear, causing injury or death.

A high amount of industrial and toxic waste is a potent threat to the health of seals. Algal biotoxins and disease caused by such pollutants are proving to be fatal for seals and sea lions. Non-biodegradable marine debris, such as drifting trawling nets, plastic packaging straps and monofilament gill nets, are hazards that have killed nearly 2 percent of Tasmanian seals.

Climate change is also a deadly threat to seals and sea lions. Changes in temperatures in ocean currents has wreaked havoc in the food patterns of these mammals and affected their reproductive cycles. Species which primarily rely on ice – like the ribbon, ringed, spotted and bearded seals – have been direct victims of rapid ice loss leading to premature separation of mothers from their cubs during the milking period. The inability of the mammals to build dens during such periods of ice loss has resulted in high mortality among pups.

Other threats to seals and sea lions include introduced species and barbed wire. The introduction of animals like dogs, especially in Alaska, has made seals prone and exposed to disease. Barbed wire barriers have been erected that are known to cause severe injuries to sea lions.

Seals have long been commercially hunted for their pelts, meat and blubber. As a result, the Caribbean monk seal was hunted to extinction. In 1911 the North Pacific Fur Seal Convention made it illegal to hunt seals at sea, but hunting babies seals on land continued. All pinnipeds are now protected in U.S. waters under the Marine Mammal Protection Act, but baby seals are still being killed in other countries for their fur.

Each year thousands of seals are killed in Canada. Although the Canadian seal hunt is the largest in the world and has the highest profile internationally, sealing is also carried out in a number of other countries across the world including Greenland, Namibia, Russia, Norway and Sweden.

Seal hunting is inhumane. Groups have campaigned on the issue for years and their evidence shows all the horror of the hunt.

Seals and sea lions are also common victims of the animal entertainment industry. Aquariums and marine mammal theme parks are part of a billion-dollar industry built on the suffering of intelligent, social beings who are denied everything that is natural and important to them. Animals are taken from the wild; their families torn apart. Marine parks have shown no more interest in conserving marine mammals' natural habitats than they have in educating audiences.

Cetaceans do not belong in captivity where they are forced to perform meaningless tricks. They are often separated from family members when they’re shuffled between parks. Most die far short of their natural life spans. The living conditions at these attractions are often dismal, with animals confined to tiny, filthy, barren enclosures. Even the best artificial environments can’t come close to matching the space, diversity, and freedom that cetaceans have in their natural habitats.