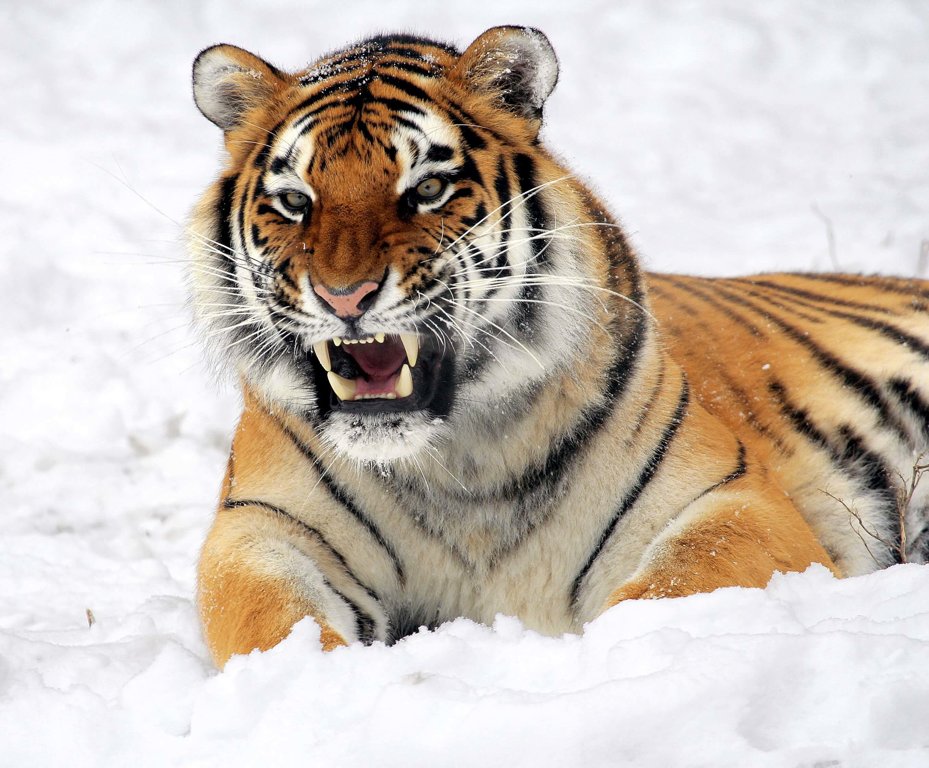 Tigers (Panthera tigris) are mammals of the Felidae family and one of four "big cats" in the panthera genus. They are predatory carnivores and the largest and most powerful of all living cat species. The Indian subcontinent is home to more than 80% of the wild tigers in the world. Tigers breed well in captivity, and the captive population in the United States may rival the wild population of the world.

Most tigers live in forests or grasslands, for which their camouflage is ideally suited, and where it is easy to hunt prey that is faster or more agile. Among the big cats, only the tiger and jaguar are strong swimmers; tigers are often found bathing in ponds, lakes, and rivers.

Although different subspecies of tiger have different characteristics, in general male tigers weigh between 400 and 715 pounds and females between 264 and 400 pounds. The males are between 5 feet 10 inches to 9 feet 1 inch in length, and the females are between 7 feet 6 inches and 9 feet in length. Of the living subspecies, Sumatran tigers are the smallest, and Amur or Siberian Tigers are the largest.

The stripes of most tigers vary from brown or hay to pure black. White tigers have far fewer apparent stripes. The form and density of stripes differs between subspecies, but most tigers have in excess of 100 stripes. The now extinct Javan tiger may have had far more than this. The pattern of stripes is unique to each animal, and thus could potentially be used to identify individuals, much in the same way as fingerprints are used to identify people. This is not, however, a preferred method of identification, due to the difficulty of recording the stripe pattern of a wild tiger.

It seems likely that the function of stripes is camouflage, serving to hide these animals from their prey. Few large animals have color vision as capable as that of humans, so the color is not as great of a problem as one might suppose. Tigers have red color vision. The stripe pattern is found on a tiger's skin, and if you shaved one, you would find that its distinctive camouflage pattern would be preserved.

Tigers have the longest and biggest canine teeth of all the wild cats. A tiger's canines are larger and longer than those of a similar-sized lion. The reason for this is likely due to the habit of preying on large herbivores in its habitat whose bones are thick and large; the tiger's canines have to be strong enough to break the bones of their prey. Moreover, as tigers hunt alone to bring down their prey, they have to work harder than lions, which hunt in groups.

Tigers often ambush their prey as other cats (including the domestic cat) do, overpowering their prey from any angle, using their body size and strength to knock prey off balance. Once prone, the tiger bites the back of the neck. For large prey, a bite to the throat is preferred. After biting, the tiger then uses its muscled forelimbs to hold onto the prey, bringing it to the ground. The tiger remains latched onto the neck until its prey dies. Powerful swimmers, tigers are known to kill prey while swimming. Some tigers have even ambushed boats for the fishermen on board or their catch of fish.

In the wild, tigers are one of the highest-jumping mammals, perhaps second only to the puma. Their forelimbs, massive and heavily muscled, are used to hold tightly onto the prey and to avoid being dislodged, especially by large prey such as gaurs. A single tremendous blow of the paw can kill a full-grown wolf.

Males show a behavior called flehmen, a grimacing face, when identifying the condition of a female's reproductive condition by sniffing their urine markings. A female is only receptive for a few days and mating is frequent during that time period. A pair will copulate frequently and noisily, like other cats. The gestation period is 103 days and 3-4 cubs are born. The females rear them alone. Wandering male tigers may kill cubs to make the female receptive. At 8 weeks, the cubs are ready to follow their mother out of the den. The cubs become independent around 18 months of age, but it is not until they are around 2-2 1/2 years old that they leave their mother. The cubs reach sexual maturity by 3-4 years of age. The female tigers generally own territory near their mother, while males tend to wander in search of territory, which they acquire by fighting and eliminating a territorial male.

In the wild, tigers mostly feed on deer, wild boar, and wild cattle, including gaur and water buffaloes, young rhinos and elephants, and sometimes leopards and bears. Siberian tigers and brown bears are a serious threat to each other and both tend to avoid each other. Of all the land carnivores, the tiger is the only species that has been known to charge and take down a full-grown male elephant, one-on-one. However, due to the depletion of both species, these extraordinary confrontations become exceedingly rare and are hardly ever witnessed by humans in the wild.

Humans are the tiger's only serious predator, who often kill tigers illegally for their fur. Also, their bones and nearly all body parts are used in Chinese medicine for a range of purported uses including pain killers and aphrodisiacs. Poaching for fur and destruction of habitat have greatly reduced tiger populations in the wild, and it has been placed on the endangered species list.

The biggest threats to the tiger's survival are poaching, loss of habitat and the black market. In an effort to protect tigers from poachers and the rapidly increasing loss of land, wildlife reserves have been established. Most reserves, however, are isolated islands of habitat giving tigers little chance of survival due to disease, difficulty in acquiring mates and in-breeding. These “protected areas” are also difficult to defend from poachers. Habitat protection, combined with the promotion of alternatives to traditional Chinese remedies and stricter law enforcement, is vital to saving tigers.

Tigers have long been victims of the animal entertainment industry; forced to perform in circus acts or sentenced to a life in captivity for human entertainment. Animals used in the circus spend the majority of the year imprisoned in small cages or on chains, traveling from show to show. The training endured by circus animals is almost always based on intimidation; trainers must break the spirit of the animals in order to control them. Zoos are designed with the needs and desires of the visitors in mind, not the needs of the animals. Many animals in zoos exhibit abnormal behavior as a result of being deprived of their natural environments and social structures. Most animals in zoos were either captured from the wild or bred in captivity for the purpose of public display, not species protection. Captive bred zoo animals are rarely placed in the wild.