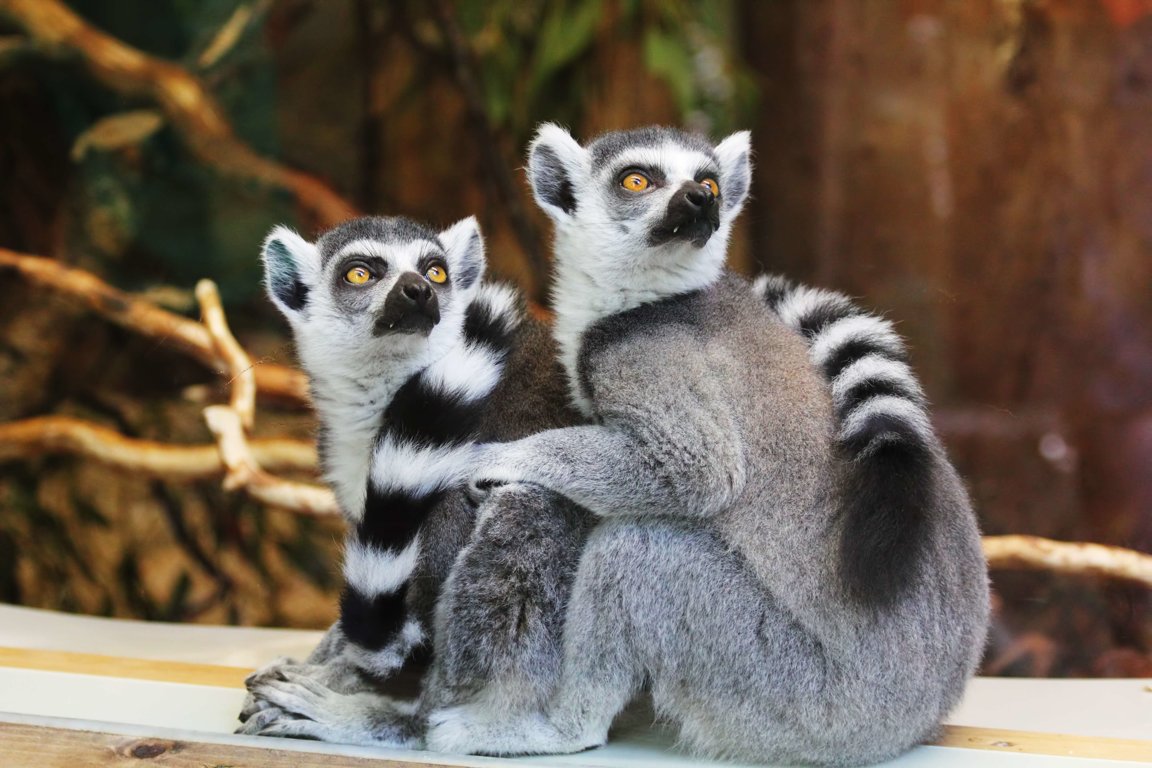 There are nearly 100 species of lemurs. All are endangered. Hunting and habitat destruction threaten their future.

Lemurs share many common primate traits, such as divergent digits on their hands and feet, and nails instead of claws (in most species). Their brain-to-body size ratio is smaller than that of anthropoid primates, and they have a "wet nose". They range in size from 1.1 oz to 20 lb and can reach 30 years old or more.

Lemurs are found naturally only on the island of Madagascar and some smaller surrounding islands, including the Comoros (where it is likely they were introduced by humans). Fossil evidence indicates that they made their way across the ocean after Madagascar broke away from the continent of Africa. While their ancestors were displaced in the rest of the world by monkeys, apes, and other primates, the lemurs were safe from competition on Madagascar and differentiated into a number of species. The larger species have all become extinct since humans settled on Madagascar. Until shortly after humans arrived on the island around 2,000 years ago, there were lemurs as large as a male gorilla. Typically, the smaller lemurs are active at night (nocturnal), while the larger ones are active during the day (diurnal).

The small cheirogaleoids are generally omnivores, eating a variety of fruits, flowers and leaves (and sometimes nectar) as well as insects, spiders and small vertebrates. The remainder of the lemurs, the lemuroids, are primarily herbivores, although some species supplement their diet with insects. They inhabit highland country and thinly wooded forests.

Lemurs are social and live in groups that usually include less than 15 individuals. Nocturnal lemurs are mostly solitary but social, foraging alone at night but often nesting in groups during the day. In many nocturnal species, the females, along with their young, will share nests with other females and possibly one male, whose larger home range happens to overlap one or more female nesting groups. In sportive lemurs and fork-marked lemurs, one or two females may share a home range, possibly with a male. In addition to sharing nests, they will also interact vocally or physically with their range and mate. Diurnal lemurs live in relatively permanent and cohesive social groups. Multi-male groups are the most common. True lemurs utilize this social system, often living in groups of ten or less. Dwarf lemurs are solitary but social, foraging alone but often sleeping in groups. Some lemurs exhibit female philopatry, where females stay within their natal range and the males migrate upon reaching maturity, and in other species both sexes will migrate. The presence of female social dominance sets lemurs apart from most other primates and mammals; in most primate societies, males are dominant unless females band together to form coalitions that displace them.

Lemur communication can be transmitted through sound, sight and smell (olfaction), using complex behaviors such as scent-marking and vocalizations. Lemurs have demonstrated distinct facial expressions including a threat stare, pulled back lips for submission, and pulled back ears along with flared nostrils during scent-marking. They have also been observed using yawns as threats. Their tails communicate distance, warn off neighboring troops and help locate troop members. Olfaction can communicate information about age, sex, reproductive status, as well as demarcate the boundaries of a territory. Small, nocturnal lemurs mark their territories with urine, while the larger, diurnal species use scent glands located on various parts of their anatomy. The ring-tailed lemur engages in "stink fights" by rubbing its tail across scent glands on its wrists, and then flicking its tail at other male opponents. Some lemurs defecate in specific areas, otherwise known as latrine behavior. Although many animals exhibit this behavior, it is a rare trait among primates. Latrine behavior can represent territorial marking and aid in interspecies signaling. Some of the most common calls among lemurs are predator alarm calls.

Lemurs not only respond to alarm calls of their own species, but also alarm calls of other species and those of non-predatory birds. The ring-tailed lemur and a few other species have different calls and reactions to specific types of predators. Lemur calls can also be very loud and carry long distances. Both ruffed lemurs and the indri exhibit contagious calling, where one individual or group starts a loud call and others within the area join in. The song of the indri can last 45 seconds to more than 3 minutes and tends to coordinate to form a stable duet. Tactile communication (touch) is mostly used by lemurs in the form of grooming, although the ring-tailed lemur also clumps together to sleep (in an order determined by rank), reaches out and touches adjacent members, and cuffs other members. Reaching out and touching another individual in this species has been shown to be a submissive behavior, done by younger or submissive animals towards older and more dominant members of the troop. Unlike anthropoid primates, lemur grooming seems to be more intimate and mutual, often directly reciprocated.

The habitat of lemurs is disappearing because of fires, overgrazing of domestic livestock and logging. Lemurs are also threatened by hunting. All lemurs are endangered species, due mainly to habitat destruction (deforestation) and hunting. Although conservation efforts are under way, options are limited because of the lemurs' limited range and because Madagascar is desperately poor. In some remote areas of Madagascar, the cultural motivation behind posting lemur hunting traps is that of indigenous superstition that lemurs are omens and harbingers of bad fortune.

The lemur pet trade is threatening the survival of many lemur species. Despite being illegal, thousands of lemurs are stolen from the wild in Madagascar. Lemur breeders peddle the animals through the internet to unqualified individuals who fail to realize that baby lemurs grow into sexually mature and aggressive adults. These animals are denied their wild nature, strong family bonds and social interaction with their own kind. They are destined to live a sad and lonely life in a cage.

Lemurs are also put on display by many zoos. Like "pet" lemurs, they are confined to tiny spaces and denied a natural life for the sake of human entertainment. Captive lemurs often become obese resulting in coronary heart disease and diabetes. They become inactive and lethargic, further threatening their health. Like all zoo animals, they face constant stress and boredom, often resulting in mental illness.