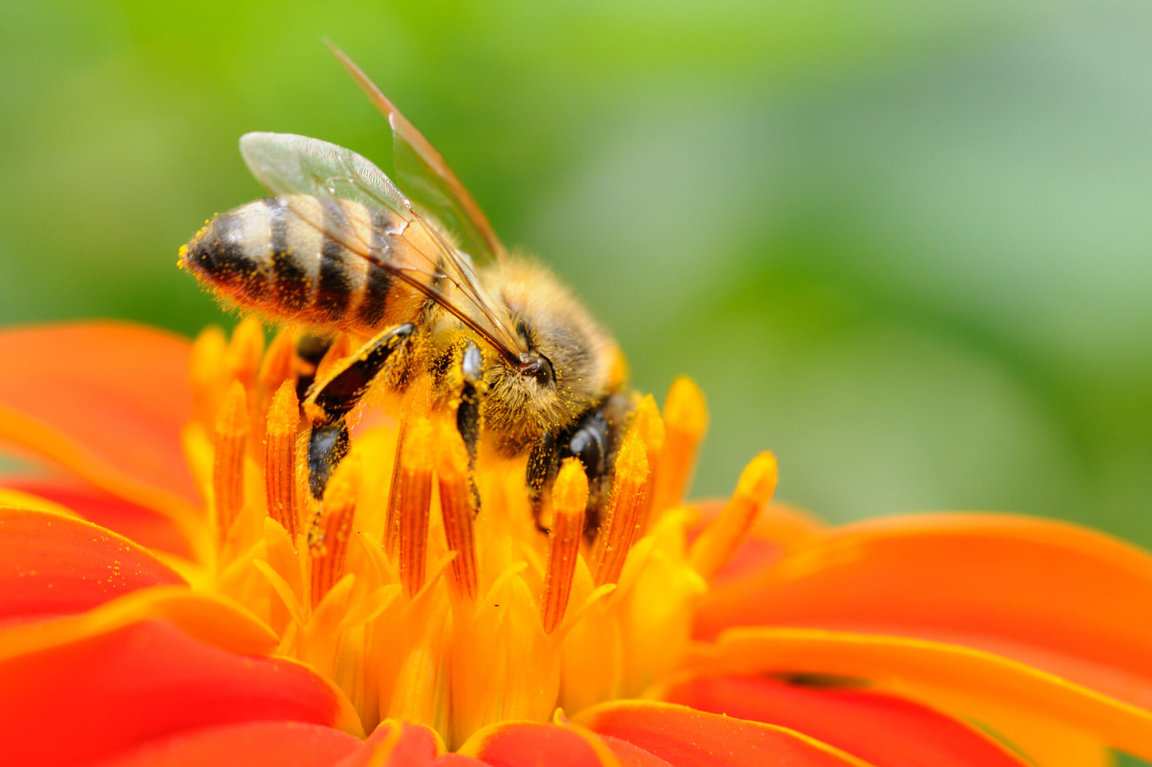 Bees are flying insects closely related to wasps and ants, and are known for their role in pollination and for producing honey and beeswax. There are nearly 20,000 known species of bees in seven to nine recognized families. They are found on every continent except Antarctica, and in every habitat on the planet that contains insect-pollinated flowering plants.

Bees are adapted for feeding on nectar as an energy source and pollen for protein and other nutrients. Most pollen is used as food for larvae.

Bees have a long tongue that enables them to obtain the nectar from flowers. They have antennae and two pairs of wings, the hind pair being the smaller of the two.

The best-known bee species is the European honey bee, which, as its name suggests, produces honey, as do a few other types of bee. Sweat bees are the most common type of bee in the Northern Hemisphere, though they are small and often mistaken for wasps or flies.

Bees may be solitary or may live in various types of communities. Bees practice agriculture, warfare and symbolic language. They can calculate the most efficient route between two points faster than super computers. They are capable of performing higher-order cognition.

Bees can learn from other species as well as communicate specific threats to predators from other species. They have different personalities and emotions. They can become pessimistic and suffer from depression.

Bees have careers: scout bees search for food sources, soldier bees work as security guards, undertakers remove dead bees from the hive. In addition to thousands of worker adults, a colony normally has a single queen and several hundred drones. The queen has all the babies, and also produces pheromones that serve as a social “glue” unifying and giving an individual identity to a bee colony. Drones are males who fertilize the queen during her mating flight, then die instantly after mating. Workers are females that care for the queen, build beeswax combs, clean and polish the cells, feed the bees, handle incoming nectar, remove trash, guard the entrance and even air-condition and ventilate the hives. As field bees they forage for pollen, nectar, water and plant sap.

When older bees perform jobs usually carried out by younger members, their brains stop aging and begin to age in reverse. Bees use the sun as a compass and navigate by polarized light when it's cloudy. Honeycombs are the most efficient structures in nature—the walls meet at a precise 120-degree angle, a perfect hexagon. To make one pound of honey, workers in a hive fly 55,000 miles and visit two million flowers. In just a single collecting trip, one bee will visit 50 to 100 flowers, returning to the hive carrying over half her weight in nectar and pollen. The energy in one ounce of honey could provide one bee with enough fuel to fly around the world.

Solitary bees create nests in hollow reeds or twigs, holes in wood, or, most commonly, in tunnels in the ground. The female typically creates a compartment (a "cell") with an egg and some provisions for the resulting larva, then seals it off. A nest may consist of numerous cells. While solitary females each make individual nests, some prefer to make nests near others of the same species. In some species, multiple females share a common nest, but each makes and provisions her own cells independently. Solitary bees are either stingless or very unlikely to sting (only in self-defense, if ever).

Bees are the favorite meal of the bee-eater bird. Other common predators are kingbirds, mockingbirds, beewolves, and dragonflies.

Bees and other insect pollinators are threatened by environmental challenges including habitat loss, degradation, fragmentation, non-native species, diseases, pollution and pesticides. Wild bees have been dying off in large numbers, as well as domestic bees. Some species are now listed as endangered.

Colony collapse disorder (CCD) is a phenomenon in which worker bees from a European honey bee colony abruptly disappear. The reasons for its increasing prevalence remain unclear, but many possible causes have been proposed: pesticides, primarily neonicotinoids; infections with Varroa and Acarapis mites; malnutrition; various pathogens; genetic factors; immunodeficiencies; loss of habitat; changing beekeeping practices; or a combination of factors.

Varroa destructor has been called a modern honeybee plague. Varroa are microscopic vampire bugs that attach themselves to baby bees, sucking out the bees’ blood with a sharp, two-pronged tongue. The varroa directly weaken the bees they infest, but the bugs can also introduce bacteria and other viruses which in turn makes the bees that much more vulnerable to any other kind of shock.

Honeybees are starving as open land, with the flowers and plants that provide food for the bees, is now planted with monocultures of corn and soybeans that offer little nutrition. A number of other diseases are afflicting honeybees, including the tobacco ringspot virus, a plant disease that has been implicated by researchers. Commercial honeybee colonies may be trucked thousands of miles for work, including the massive and lucrative spring almond pollination in California, which requires billions of bees. The stress of travel kills many of them.

Neonicotinoid pesticides are injected directly into the seed of a future plant. That means traces of the insecticide may always be part of the plant tissue. A growing body of research has implicated neonicotinoid in the death of honeybees. There is particular concern that neonicotinoids might have sub-lethal effects on bees, not killing them outright, but causing enough damage to make them vulnerable to an assortment of other ills.