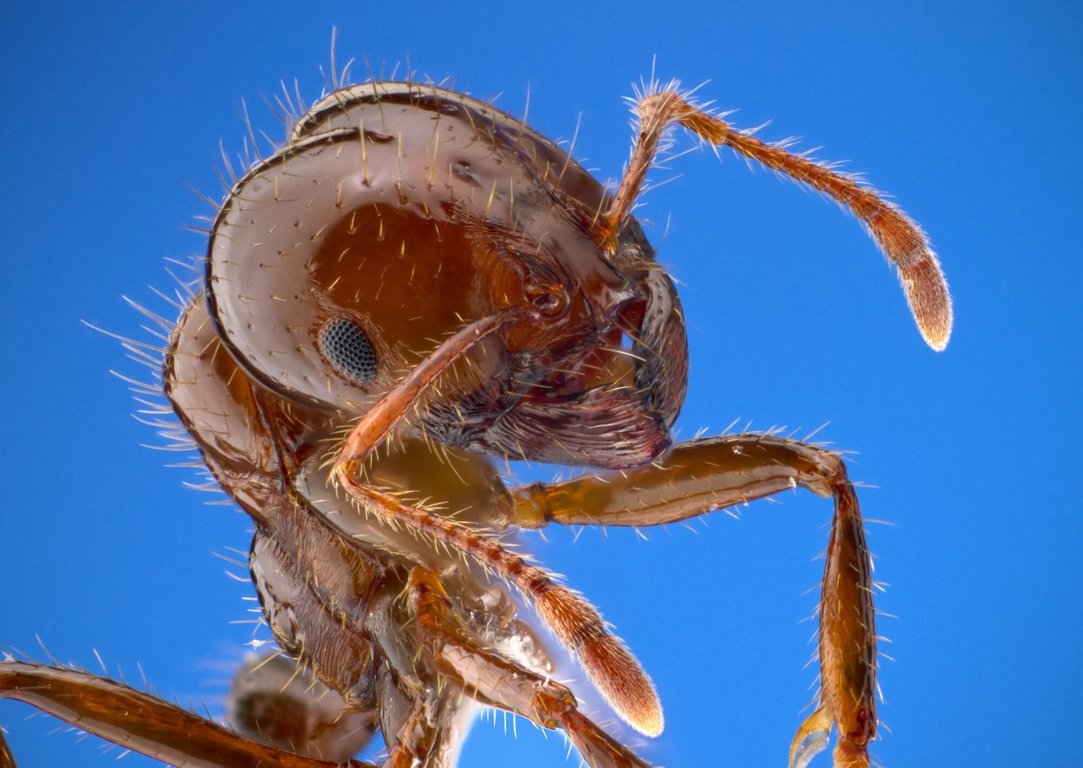 Ants are insects of the family Formicidae and, along with the related wasps and bees, belong to the order Hymenoptera. There is an estimated 22,000 species of ants.

Ants have colonized almost every landmass on Earth. The only places lacking indigenous ants are Antarctica and a few remote or inhospitable islands. Ants thrive in most ecosystems and may form 15–25% of the terrestrial animal biomass. Their success in so many environments has been attributed to their social organization and their ability to modify habitats, tap resources, and defend themselves.

Ants occupy a wide range of ecological niches, and are able to exploit a wide range of food resources either as direct or indirect herbivores, predators, and scavengers. Most species are omnivorous generalists, but a few are specialist feeders.

The animal with the largest brain in proportion to its size is the ant. Ants farm, gather, hunt, raise animals and engage in rituals. Ants are social insects and live in colonies of as many as 500,000 individuals. They divide jobs among each other. Queens lay eggs while all other females are workers who feed the babies, take out the trash, forage for food and supplies and defend the nest. Males only have to mate with the queen.

Some ants keep other ants, or other insects, as slaves forcing them to do chores. Ants have been farming for 70 million years, using sophisticated horticultural techniques to grow crops. They even keep "cattle", aphids which they milk by tickling them with their antennae. They clip the wings of aphids that have them or produce chemicals from glands in their jaws to stop the development of their wings. They can also use chemicals to tranquilize aphids.

Ants have two stomachs, one to hold food for themselves, and one for others. Ants "hear" by feeling vibrations in the ground with special sensors on their feet and knees. Their antennae and body hairs feel around while foraging for food. They communicate with a sophisticated language using chemicals known as “pheromones.”

One species, M. smithii, reproduces asexually, with all babies clones of the queen. There are no males. Army ants do not build permanent nests. They travel around attacking other colonies and other insects and build temporary campsites at night. The largest ant colony discovered to date was over 3,750 miles wide. Ants engage in war, including psychological warfare.

Most ant species have a system in which only the queen and breeding females have the ability to mate. Contrary to popular belief, some ant nests have multiple queens, while others may exist without queens. The winged male ants, called drones, emerge from pupae along with the breeding females (although some species, such as army ants, have wingless queens), and do nothing in life except eat and mate.

Most ants are univoltine, producing a new generation each year. During the breeding period, females and winged males leave the colony in what is called a nuptial flight. Typically, the males take flight before the females. Males then use visual cues to find a common mating ground, for example, a landmark such as a pine tree to which other males in the area converge. Males secrete a mating pheromone that females follow.

Females of some species mate with just one male, but in others they may mate with as many as ten or more different males. Mated females then seek a suitable place to begin a colony. There, they break off their wings and begin to lay and care for eggs. The females store the sperm they obtain during their nuptial flight to selectively fertilize future eggs. The first workers to hatch are weak and smaller than later workers, but they begin to serve the colony immediately. They enlarge the nest, forage for food, and care for the other eggs. Species that have multiple queens may have a queen leaving the nest along with some workers to found a colony at a new site, a process akin to swarming in honeybees.

If the egg is fertilized, the baby will be female; if not, it will be male. Ants develop by complete metamorphosis, including a larva stage and pupal stage before emerging as an adult. The larva is largely immobile and is fed and cared for by workers.

The larvae grow through a series of four or five moults and enter the pupal stage. The pupa has the appendages free and not fused to the body as in a butterfly pupa. Larvae and pupae need to be kept at fairly constant temperatures to ensure proper development, and are often moved around among the various brood chambers within the colony.

A new worker spends the first few days of its adult life caring for the queen and young. She then graduates to digging and other nest work, and later to defending the nest and foraging.

Ant colonies can be long-lived. The queens can live for up to 30 years, and workers live from 1 to 3 years. Males, however, are short-lived and survive for only a few weeks.

Ants communicate with each other using pheromones, sounds, and touch. Like other insects, ants perceive smells with their long, thin, and mobile antennae. The paired antennae provide information about the direction and intensity of scents. Since most ants live on the ground, they use the soil surface to leave pheromone trails that may be followed by other ants. In species that forage in groups, a forager that finds food marks a trail on the way back to the colony. This trail is followed by other ants, and these ants then reinforce the trail when they head back with food to the colony. When the food source is exhausted, no new trails are marked by returning ants and the scent slowly dissipates.

Ants use pheromones for more than just making trails. A crushed ant emits an alarm pheromone that sends nearby ants into an attack frenzy and attracts more ants from farther away. Several ant species even use "propaganda pheromones" to confuse enemy ants and make them fight among themselves. Pheromones also are exchanged, mixed with food, and passed on to transfer information within the colony. This allows other ants to detect what task group (e.g., foraging or nest maintenance) other colony members belong to. In ant species with queen castes, when the dominant queen stops producing a specific pheromone, workers begin to raise new queens in the colony. Some ants produce sounds by stridulation. Sounds may be used to communicate with colony members or with other species.

Like most animals, the primary threat to ants is the destruction of their habitat. Human development has taken an alarming toll on the environment. Impact from land use practices such as agricultural conversion, deforestation, and urban sprawl continue to degrade and fragment remaining pockets of habitat and accelerate biodiversity loss. Pesticides and other forms of pollution are also of serious concern, as well as genetically modified organisms (GMOs).

Ants are also victims the pet trade, sold for a short life in captivity in “ant farms” for human amusement. Research has proven that insects are complex, emotional and intelligent beings. Captivity is cruel for wild animals. The physical and physiological needs of animals can never be met in captivity.