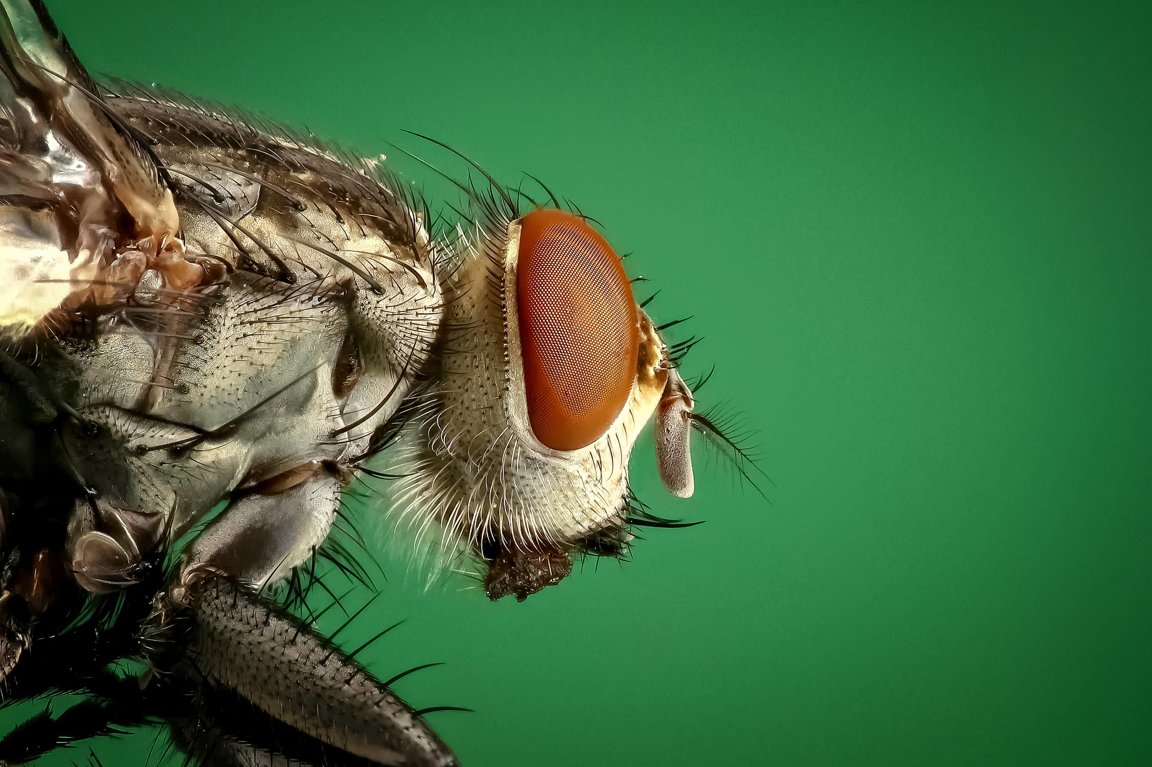 Insects are cold blooded arthropods and represent 90% of all life forms on earth. They are among the most diverse groups of animals on the planet, with over 1 million different known species and as many as 9 million more yet to be discovered. Insects have three body parts: head, thorax and abdomen. They have three pairs of legs with six joints and they have two antennae. Bugs have external skeletons. These “exoskeletons” contain sense organs for sensing smell, sound, light, temperature, wind and pressure.

Most insects go through 4 life stages: egg, larvae or nymph, pups and adult. Bugs do not have lungs and most have compound eyes, meaning each eye has many lenses. Adult insects usually move about by walking or flying...and sometimes by swimming. They are the only animals without backbones that fly. As it allows for rapid yet stable movement, many walk with their legs touching the ground in alternating triangles.
Insect species are divided up into 32 orders. The largest group is beetles, with about 500,000 different species. One out of every four animals on the planet is a beetle.

Insects perform many ecological roles. They pollinate flowers and plants, produce silk, honey, wax and other products. Blow-flies consume carrion. Pollinators are essential to the life-cycle of many flowering plant species on which most organisms, including humans, are dependent. Many other insects are considered ecologically beneficial as predators.

These highly adaptable creatures have evolved to live successfully in most all environments, though only a small number of species live in the oceans which are dominated by their cousin arthropods, crustaceans. Many insects spend at least part of their lives under water, breathing through gills, and some adult insects are aquatic and can swim. Some species, such as water striders, are capable of walking on the surface of water. Many are solitary, while bees, ants and termites are very social and live in large, well-organized colonies.

Invertebrates, from mollusks to butterflies to earthworms to corals, exhibit vast levels of diversion. Almost 97% of all animal species on earth are estimated to belong to this group. One-third of the known invertebrate species are now threatened with extinction. Water pollution, water projects, and groundwater withdrawal threaten freshwater invertebrates, while deforestation and animal agriculture is also a great factor of invertebrate endangerment or extinction. In addition, reef-building corals in the ocean are diminishing at an increasing rate.

Although there are other giant insects that are longer or wider than the goliath beetle, they hold the record for weight and can grow up to 4.5 inches long and weigh up to 3.5 ounces.

Fairyflies are as tiny as only 0.0055 inches long.

Tiny mites, from the Anystidae family, are the fastest animals in the world when it comes to body size. They can run 20 times faster than a cheetah, the equivalent of a human running 1,300 mph.

The queen of termites have been known to live for 50 years, and may live for 100 years.

Many insects are devoted mothers, guarding and continuously cleaning their eggs and assisting the babies in hatching. Newborn babies live with their mother, nesting under her as she protects and feeds them. Parents and offspring communicate extensively and coordinate their daily routines. Some cockroaches carry their babies in little pouches like kangaroos and nourish them in the uterus with milk. Dung beetles tenderly care for their children by cleaning away toxic molds and fungi from the dung balls where the babies live. Wolf spiders carry their egg sacs with them and baby wolf spiders ride around on their mother’s abdomen. Some insect fathers are also devoted to helping with raising the young. Female giant water bugs have been known to attach eggs to the back of the father who carries them around until they hatch. Wood roaches are monogamous, raise one group of children, and live in one log for their entire life.

Insects can communicate with each other in a variety of ways. Male moths can sense the pheromones of female moths over great distances. Other species communicate with sounds: crickets stridulate, or rub their wings together, to attract a mate and repel other males. Some communicate with light. Insects have celestial navigation capabilities. Dung beetles use light from the moon to move across great distances in a straight line and also use the Milky Way to direct them.

LARGEST BRAINS IN THE WORLD

The animal with the largest brain in proportion to its size is the ant. They farm, gather, hunt, raise animals and engage in rituals. Ants are social insects and live in colonies of as many as 500,000 individuals. They divide jobs among each other. Queens lay eggs while all other females are workers who feed the babies, take out the trash, forage for food and supplies and defend the nest. Males only have to mate with the queen. Ants have two stomachs, one to hold food for themselves, and one for others. Some ants keep other ants, or other insects, as slaves forcing them to do chores.

Ants have been farming for 70 million years, using sophisticated horticultural techniques to grow crops. They even keep "cattle", aphids which they milk by tickling them with their antennae. They clip the wings of aphids that have them or produce chemicals from glands in their jaws to stop the development of their wings. They can also use chemicals to tranquilize aphids.

Ants "hear" by feeling vibrations in the ground with pecial sensors on their feet and knees. Their antennae and body hairs feel around while foraging for food. They communicate with a sophisticated language using chemicals known as “pheromones.”

One species, M. smithii, reproduces asexually, with all babies clones of the queen. There are no males.

Army ants do not build permanent nests. They travel around attacking other colonies and other insects and build temporary campsites at night.

The largest ant colony discovered to date was over 3,750 miles wide. Ants engage in war, including psychological warfare.

Bees practice agriculture, warfare and symbolic language. They can calculate the most efficient route between two points faster than super computers. They are capable of performing higher-order cognition. Bees are democratic in their decision making process. They use dance as a form of voting. Worker bees select which fertilized eggs to brood in queen or worker cells, while the queen decides the sex of her young. Fertilized eggs will become females, while unfertilized eggs will become males.

Bees can learn from other species as well as communicate specific threats to predators from other species. They have different personalities and emotions. They can become pessimistic and suffer from depression.

They have careers: scout bees search for food sources, soldier bees work as security guards, undertakers remove dead bees from the hive. In addition to thousands of worker adults, a colony normally has a single queen and several hundred drones. The queen has all the babies, and also produces pheromones that serve as a social “glue” unifying and giving an individual identity to a bee colony. Drones are males who fertilize the queen during her mating flight, then die instantly after mating. Workers are females that care for the queen, build beeswax combs, clean and polish the cells, feed the bees, handle incoming nectar, remove trash, guard the entrance and even air-condition and ventilate the hives. As field bees they forage for pollen, nectar, water and plant sap. When older bees perform jobs usually carried out by younger members, their brains stop aging and begin to age in reverse.

Bees use the sun as a compass and navigate by polarized light when it's cloudy. Honeycombs are the most efficient structures in nature—the walls meet at a precise 120-degree angle, a perfect hexagon. To make one pound of honey, workers in a hive fly 55,000 miles and visit two million flowers. In just a single collecting trip, one bee will visit 50 to 100 flowers, returning to the hive carrying over half her weight in nectar and pollen. The energy in one ounce of honey could provide one bee with enough fuel to fly around the world.

Butterflies are the second largest group of pollinators, following bees. Without their assistance, humans likely would not survive. These beautiful animals undergo a fascinating metamorphosis which takes place in four stages: egg, caterpillar, pupa and adult. Mother butterflies attach their eggs with a special glue to caterpillar food, or “host” plant. When the caterpillar is born, it eats its egg, then begins eating the plant. When the caterpillar's insides grow too big for its outside, its covering splits and is shed. A new exoskeleton lies underneath. The caterpillar continues to shed numerous times, then becomes a pupa. It then seeks a sheltered spot, suspends itself by silken threads and sheds one more time forming a hard casing around its body. Inside this chrysalis, the pupa is growing six legs, a proboscis, antennae and wings. Within days, months or years, depending on the species, the chrysalis breaks open and a butterfly emerges. Butterflies can live in the adult stage from a week to a year, depending on the species. They have four wings, usually brightly colored with unique patterns made up of tiny scales.

They remember things they learned as caterpillars. They can fly up to 30 mph and up to 50 miles in a day. They learn home ranges and memorize locations of nectar and pollen sources, host plants and communal roosting sites. They are able to plan the most efficient routes by using calculations that mathematicians call the "traveling salesman algorithm". Many butterflies are migratory and capable of long distance flights, using the sun to orient themselves. They also perceive polarized light and use it for orientation when the sun is hidden. Butterflies "taste" with their feet through tiny receptors.

Insects brains pack neurons 10 times more densely than mammal brains. Their brains also use each cell more flexibly than mammals, boosting computing power without having to increase the number of cells. They prove that animals with bigger brains are not necessarily more intelligent. Honeybees can count, categorize similar objects like dogs or human faces, understand "same" and "different," and differentiate between shapes that are symmetrical and asymmetrical. Spiders’ brains are so large relative to the rest of their bodies, they extend out of their heads and all the way down into their legs. The minuscule brain of the C. elegans nematode worm has just 302 neurons, but is able to carry out the same functions as the nervous systems of higher organisms. Leeches have 32 brains (ganglia).

You know that summer has arrived when the first glowing firefly rises on a warm evening. Not long after, a fairy cotillion will be danced nightly. “Lightning bugs” or “fireflies” are actually beetles, nocturnal members of the aptly named Lampyridae family. Fireflies take in oxygen and, inside special cells, combine it with a substance called luciferin. This chemical process takes place in dedicated organs located under the insects’ abdomens and produces the light. Fireflies flash their light in patterns that are unique to each of the 2,000 species. They are communicating with their light and each blinking pattern is an optical signal to a potential mate.