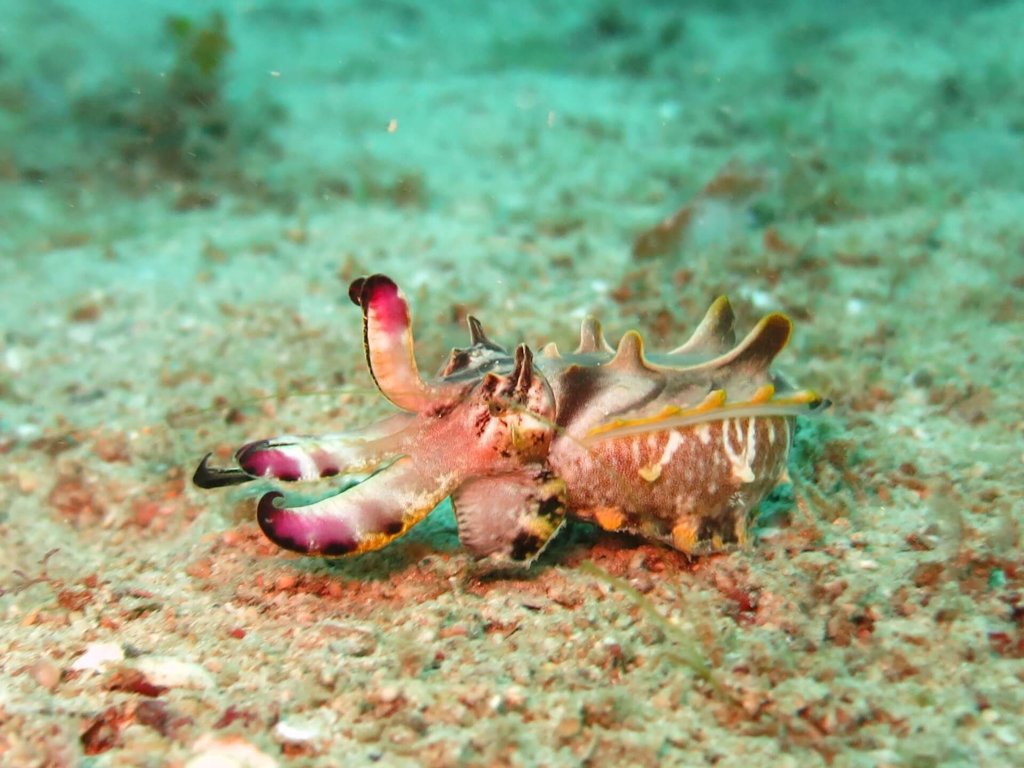 ADOPT A CUTTLEFISH
Cuttlefish are small to medium sized mollusc inhabiting ocean waters throughout the world. Cuttlefish are cephalopods, not fish. Cephalopods include the squid, octopus and nautilus. Like their squid and octopus relatives, cuttlefish have large, elongated bodies and tentacles surrounding their mouths. Cuttlefish are considered one of the ocean’s most intelligent invertebrates.
There are 120 known species of cuttlefish found across the globe, from warm and tropical shallows to cold depths of the deep seas. They are known for the flashing colors displayed on their bodies during fighting and mating.
Cuttlefish have 3 hearts and green-blue blood. They possess 8 arms and 2 long tentacles used for feeding. Cuttlefish are color blind and taste with their suckers. They have W shaped eyelids to help them see in front and behind at the same time.
Cuttlefish are amazing masters of disguise. They rely on their incredible camouflage abilities to avoid predators. Cuttlefish change color almost instantly to match their surroundings, and mimic the shape and texture of objects around them while arranging their arms to match the shape of the objects.
Like squid and octopuses, cuttlefish have sacks that eject ink to aid in escaping predators. Their ink can also be mixed with mucus to create a smaller, denser cloud about the same shape and size as their own bodies to act as a decoy cuttlefish – confusing attackers. Their color-changing abilities can also be used to hypnotize potential prey with pulsating lights and color shows.
Cuttlefish are carnivorous animals, primarily preying on small crustaceans such as crabs and shrimp. Cuttlefish also eat fish. They use their camouflaging abilities for sneak attacks and catch prey with sucker-pads on the ends of their tentacles – bringing the animal into their sharp beaks.
During cuttlefish mating rituals, male cuttlefish change their body colors to attract female cuttlefish. Some males even make themselves look like female cuttlefish to fool dominant males and then steal their females. Females place multiple sperm packets from different males into their mouth cavities. When ready to lay her eggs, she decides which male's sperm to use. Male cuttlefish try to get the females to use their own sperm by shooting a jet stream of water into the female's mouth to remove the sperm of other males. Once the female has found a safe location to lay her eggs, she reaches into her mouth cavity and takes out the sperm packets of her choice to fertilize the eggs she lays. Female cuttlefish lay about 200 eggs and some die soon afterwards.
Since cuttlefish are relatively small in size, they have numerous marine predators that hunt them. Sharks, large fish and even other cuttlefish are the most common predators of cuttlefish.
THREATS TO CUTTLEFISH
Ocean acidification caused by increased levels of carbon dioxide in the atmosphere is a serious threat to all cuttlefish. Studies have shown that under high pCO2 concentrations, cuttlefishes actually lay down a denser cuttlebone which is likely to negatively affect buoyancy regulation.
Cuttlefish are also victims of the commercial fishing industry, intensively fished to the sustainable limit and beyond. Females may also be used as lures in traps during the spawning season. Cuttlefish are also frequently caught as bycatch.
Pollution, plastic and changes in climate also threaten cuttlefish.