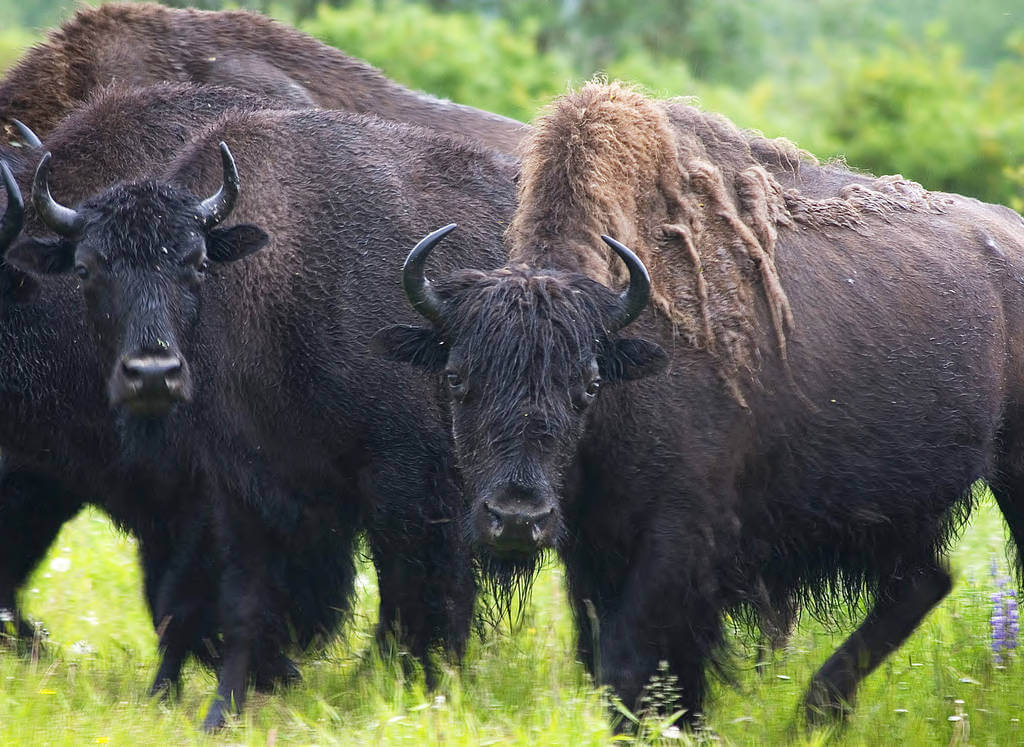 Along with the bald eagle, the bison perhaps best symbolizes the spirit of American wilderness. While many people are aware that both animals teetered on the brink of extinction in the past due to human encroachment, few realize that wild bison continue to be the victims of a calculated, annual slaughter in the Greater Yellowstone Area.

During the mid to late 1800s, government agents orchestrated one of the most aggressive and wanton animal massacres in history, killing bison indiscriminately in an attempt to subjugate Native Americans. With the addition of market hunters and settlers killing bison for profit and for fun, America's wild bison herds were reduced from an estimated 60 million to perhaps as few as 100.

With the establishment of Yellowstone National Park in 1872 and the National Park Service in 1916, the 25 bison remaining in the Park finally were afforded some protection. Initially, management policies allowed for the active manipulation of populations by culling what was perceived as "surplus" animals. But eventually, the management strategy evolved to an approach which permitted natural regulation to occur, for the most part letting nature take its course rather than relying on human intervention.

This was good news for the bison, but sadly their fortune was short lived. Since the mid 1980s, more than 3,000 bison have been massacred under the supervision of government officials bowing to the pressures of the livestock industry and its cohorts.

WHY ARE BISON BEING KILLED?

In 1917, officials discovered that some Yellowstone bison were infected with Brucella abortus, the bacteria which causes the disease brucellosis in domestic cattle. In cattle, the disease produces spontaneous abortions, but bison do not appear to be similarly affected. In fact, over the past 80 years in the entire Greater Yellowstone Area, there have been only four documented bison abortions, which may or may not have been caused by the bacteria.

Over the past decade, bison have been emigrating from the Park over its northern and western boundaries into the state of Montana during winter months. Because of several mild winters, and the National Park Service's continued grooming of snowmobile trails which makes it easier for bison to exit the Park, more and more bison have been stepping hoof over Park boundaries.

The livestock industry and federal and state livestock agencies contend that bison can transmit the Brucella abortus bacteria to cattle under natural conditions. In reality, there has never been a documented case of this occurring. Despite this fact, they continue to wage a war against Yellowstone bison.

HOW THE BACTERIA IS TRANSMITTED

The primary route of transmission is direct contact of susceptible animals with infected reproductive products, such as fetuses and afterbirth, or with contaminated feed. Given that bison abortions are extremely rare, the risk is remote at best. Bull bison and calves pose virtually no threat of transmitting the bacteria -- because males and juveniles obviously do not give birth or have abortions -- yet shockingly hundreds have been killed. Of the blood and tissue samples taken from 218 of the bison slaughtered during the winter of 1991-92, not a single bison was infectious at the time of death.

In the event a bison abortion were to occur, the bacteria is sensitive to sunlight and heat, and in all likelihood, would die quickly outside the body, although it is possible for it to remain viable for longer periods of time if frozen. Nevertheless, in nature, aborted fetuses are consumed either by the bison themselves or by scavengers almost immediately. In addition, abortions probably would happen during January through June, a period of time which cattle are not permitted on public lands and do not come into contact with wild bison.

The U.S. Forest Service issues grazing permits on lands adjoining Yellowstone National Park, generally for the months of June through October. Cattle grazing is even allowed in Grand Teton National Park. The interests of wildlife, and not cattle, should take precedence on public lands. The grazing allotments should be either closed or modified to minimize any contact between bison and cattle. Also, mandatory vaccination of domestic calves against brucellosis within the counties surrounding the Park could further reduce the risk, if any risk exits at all, of infection. Currently, vaccinations are not mandatory in Montana or Wyoming.

AGENCIES RESPONSIBLE FOR BISON BEING KILLED

With increased bison migrations into Montana, the Montana Legislature listed bison as a game animal in 1985, giving the Montana Department of Fish, Wildlife and Parks authority to initiate a public hunt. During the winter of 1988-89, sport hunters shot 570 bison at point-blank range. Due to national media coverage, this cruel fiasco generated outrage across the country. Shortly thereafter, the Legislature decided to no longer issue bison permits to sport hunters, although state officials retained the right to implement lethal control.

Today, control has been vested in the Montana Department of Livestock, an agency which views bison as nothing more than brucellosis-infected pests who must be controlled to maintain Montana's brucellosis-free status. With the cooperative services of Department of Fish, Wildlife and Parks and National Park Service officials, government officials continue to gun down hundreds of bison each year. During the winter of 1996-97 alone, nearly 1,100 bison were killed.

Much of the hysteria derives from the U.S. Department of Agriculture's Animal and Plant Health Inspection Service (APHIS), the agency responsible for brucellosis eradication in domestic livestock. APHIS, without legal authority, has threatened to revoke the brucellosis-free status of both Montana and Wyoming if measures aren't taken to eliminate Brucella abortus in the Greater Yellowstone Area. Brucellosis-free status permits cattle producers to market their cattle without being subject to disease testing requirements. Recently, Wyoming capitulated to these threats by establishing a bison sport hunt outside the eastern boundaries of Yellowstone National Park where a small number of bison occasionally exit.

The APHIS brucellosis eradication program launched in the 1930s was intended to apply only to domestic livestock, but it appears that APHIS and other industry interests will not be satisfied until the Brucella abortus organism is eliminated in all domestic animals and wildlife.

OTHER WILD ANIMALS POSE A RISK

In addition to bison, elk can also be infected with the bacteria and can carry the disease. With more than 90,000 elk in the Greater Yellowstone Area, the likelihood of eliminating the bacteria using available technologies is virtually nonexistent. Moreover, if all infected bison were destroyed, exposure to elk would result in reinfection in the remainder.

This is particularly a problem in Wyoming where over 23,000 elk congregate on artificial feedgrounds, creating prime conditions for bacteria transmission. In fact, bison from Grand Teton National Park, just south of Yellowstone, have discovered the "free meals" being provided on the National Elk Refuge each winter in the Jackson Hole area. It is speculated that this herd of bison contracted the bacteria from elk on the feedground.

State officials rarely admit that elk may also carry the disease. Elk, of course, are a prime money maker for Montana and Wyoming state officials, who encourage propagation of elk herds so they can profit from the sale of sport hunting licenses.

Ironically, bison are being targeted allegedly to protect the livestock industry, but the general consensus among scientists is that cattle probably introduced the bacteria into the Yellowstone bison herd shortly before 1917. Victims then and victims now.