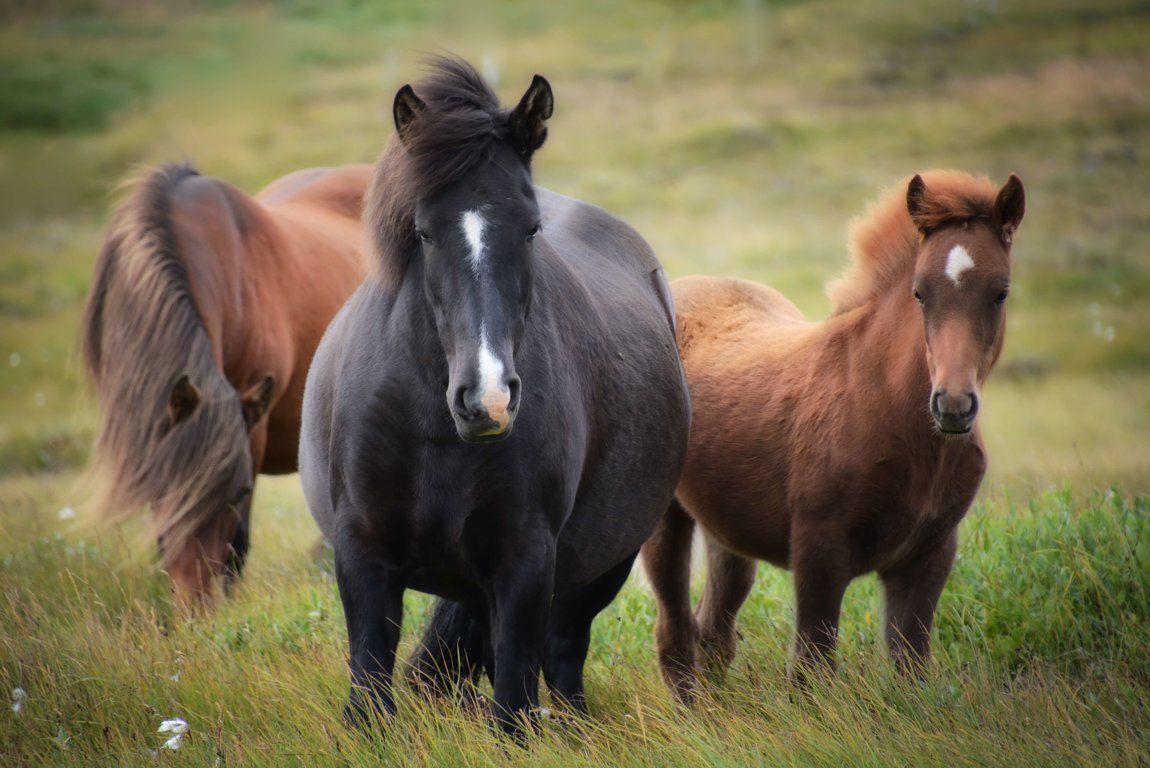 ADOPT A HORSE OR DONKEY

There are more than 300 breeds of horse in the world today. Horses are herd animals, with a clear hierarchy of rank, led by a dominant individual, usually a mare. They are also social creatures that are able to form companionship attachments to their own species and to other animals, including humans. They communicate in various ways, including vocalizations such as nickering or whinnying, mutual grooming and body language. When confined with insufficient companionship, exercise, or stimulation, individuals may develop stable vices, stereotypies of psychological origin, that include wood chewing, wall kicking, "weaving" (rocking back and forth), and other problems.

Horses are also prey animals with a strong fight-or-flight response. Their anatomy enables them to make use of speed to escape predators. Their first reaction to threat is to startle and usually flee, although they will stand their ground and defend themselves when flight is impossible or if their young are threatened. They also tend to be curious; when startled they will often hesitate an instant to ascertain the cause of their fright, and may not always flee from something that they perceive as non-threatening.

Related to this need to flee from predators is an unusual trait: horses are able to sleep both standing up and lying down. In an adaptation from life in the wild, horses are able to enter light sleep by using a "stay apparatus" in their legs, allowing them to doze without collapsing. Horses sleep better when in groups because some animals will sleep while others stand guard to watch for predators. A horse kept alone will not sleep well because its instincts are to keep a constant eye out for danger. Unlike humans, horses do not sleep in a solid, unbroken period of time, but take many short periods of rest. Horses must lie down to reach REM sleep. If a horse is never allowed to lie down, after several days it will become sleep-deprived, and in rare cases may suddenly collapse as it involuntarily slips into REM sleep while still standing.

Horses are grazing animals, and their major source of nutrients is good-quality forage from hay or pasture. They can consume approximately 2% to 2.5% of their body weight in dry feed each day.

The horses' senses are based on their status as prey animals, where they must be aware of their surroundings at all times. They have the largest eyes of any land mammal, and are lateral-eyed, meaning that their eyes are positioned on the sides of their heads. This allows horses to have a range of vision of more than 350°, with approximately 65° of this being binocular vision and the remaining 285° monocular vision. Horses have excellent day and night vision, but they have two-color, or dichromatic vision; their color vision is similar to red-green color blindness in humans where certain colors, especially red and related colors, appear as a shade of green.

Their sense of smell, while much better than that of humans, is not quite as good as that of a dog. It is believed to play a key role in the social interactions of horses as well as detecting other key scents in the environment.

A horse's hearing is good, and the pinna of each ear can rotate up to 180°, giving the potential for 360° hearing without having to move the head. Noise impacts the behavior of horses and certain kinds of noise may contribute to stress.

Horses have a great sense of balance, due partly to their ability to feel their footing and partly to highly developed proprioception - the unconscious sense of where the body and limbs are at all times. A horse's sense of touch is well developed. The most sensitive areas are around the eyes, ears and nose. Horses are able to sense contact as subtle as an insect landing anywhere on the body.

Horses have an advanced sense of taste, which allows them to sort through fodder and choose what they would most like to eat. Their prehensile lips can easily sort even small grains. Horses generally will not eat poisonous plants.

Female horses, called mares, carry their young for approximately 11 months, and a young horse, called a foal, can stand and run shortly following birth. They reach full adult development by age five, and have an average lifespan of between 25 and 30 years.

Horses are highly intelligent animals. They perform a number of cognitive tasks on a daily basis, meeting mental challenges that include food procurement and identification of individuals within a social system. They also have good spatial discrimination abilities. 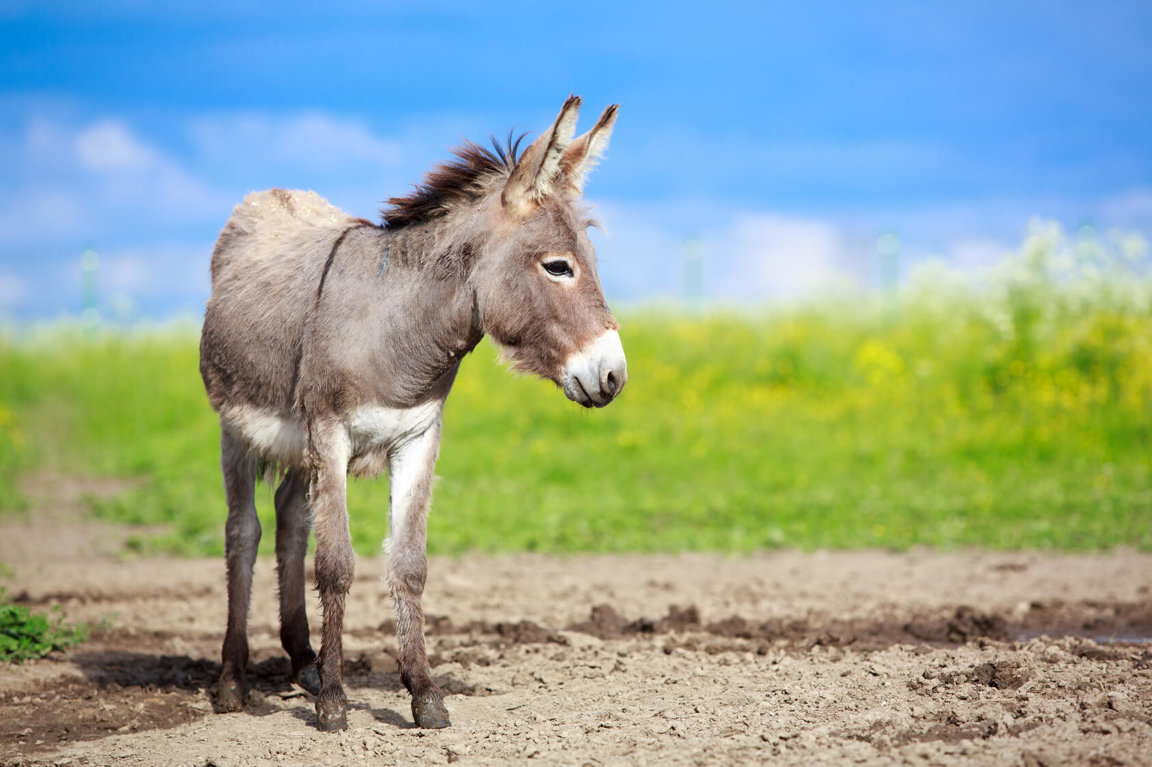 There are more than 40 million donkeys in the world, mostly in underdeveloped countries, where they are used principally as draught or pack animals. Working donkeys are often associated with those living at or below subsistence levels. Small numbers of donkeys are kept for breeding or as “pets” in developed countries. Domesticated donkeys are also used as guard animals for goats, sheep and cows against the threat of coyotes. Coyotes are the only natural threat to donkeys.

Wild donkeys, called burros, live in desert plains, where they survive on little food and water for long periods. Donkeys were first domesticated around 3000 BC, probably in Egypt or Mesopotamia, and have spread around the world.A male donkey or ass is called a jack; a female a jenny or jennet; a young donkey is a foal. Jack donkeys are often used to mate with female horses to produce mules.

Donkeys are adapted to marginal desert lands. Unlike wild and feral horses, wild donkeys in dry areas are solitary and do not form harems. Each adult donkey establishes a home range; breeding over a large area may be dominated by one jack. The loud call or bray of the donkey, which typically lasts for twenty seconds and can be heard over long distances, may help them keep in contact with other donkeys over the wide spaces of the desert. Donkeys have large ears, which pick up more distant sounds and may help cool the donkey's blood. Donkeys can defend themselves by biting, striking with the front hooves or kicking with the hind legs.

Donkeys can interbreed with other members of the family Equidae, and are commonly interbred with horses. The hybrid between a jack and a mare is a mule. The hybrid between a stallion and a jennet is a hinny, and is less common. Like other inter-species hybrids, mules and hinnies are usually sterile. Donkeys can also breed with zebras in which the offspring is called a zonkey.

Donkeys have a notorious reputation for stubbornness. This has been attributed to a much stronger sense of self-preservation than exhibited by horses. Donkeys are quite intelligent, cautious, playful, and eager to learn. Donkeys are affectionate animals and enjoy the companionship of people. Donkeys require companions or they become depressed. The donkey's favorite pastime is rolling.