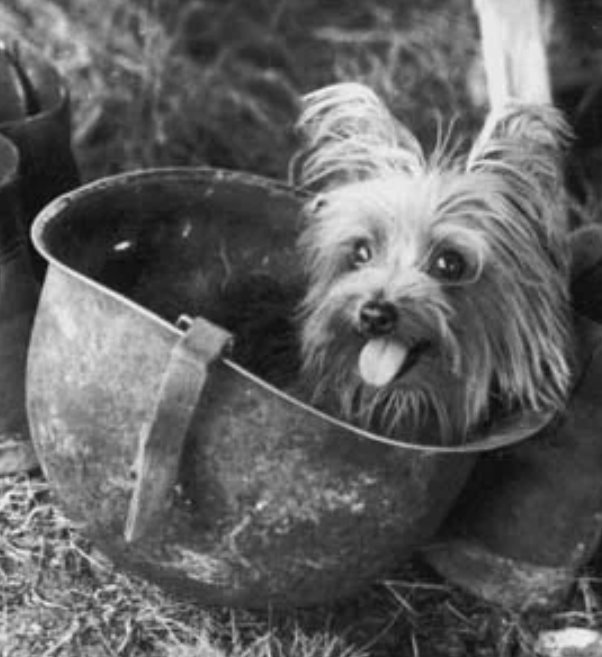 Found abandoned in a foxhole in a New Guinea jungle, a tiny four-pound, seven-inch tall Yorkshire terrier became a brave little warrior, surviving combat missions, air raids and adverse conditions of climate and terrain. Nothing got this valiant female soldier down.

How Smoky came to be in that foxhole was a mystery, as the little dog didn’t respond to either Japanese or English commands. She went through the hands of two soldiers before she was purchased for the price of a stake in a poker game and became the constant companion of Corporal William Wynne of Cleveland, Ohio. From then on Smoky slept in Wynne’s tent, fittingly on a blanket made from a green felt card table cover. Wynne shared his C-rations and the rare can of Spam with his new and dearest friend.  As a child, Wynne had known abandonment. The devoted Smoky filled a need in Wynne to feel anchored to someone.

Smoky become an integral part of the 5th Air Force. She saw twelve combat missions and was awarded eight battle stars. She survived 150 air raids on New Guinea and made it through a typhoon at Okinawa. Smoky even had a parachute made expressly for her and parachuted 30 feet out of a tree. Her keen hearing saved Wynne and eight of his men from incoming shells on their transport ship.

Perhaps Smoky’s most memorable mission was at an airstrip on the Island of Luzon in the Philippines. With Cpl. Wynne’s guidance, she was able to pull a telegraph wire through a 70-foot pipe. Her action saved construction time and kept the army engineers safe from enemy fire. It was a very dangerous assignment with collapse always a danger. Smoky made it safely through with the wire. As Wynne said, “She did it because she was asked to.”

Like canine heroes Rags and Stubby of WWI, perhaps Smoky’s most life-sustaining actions were those that kept her comrades in arms in good spirits through the long days and nights of hardship and fear. Her toughness inspired them as her playful antics cheered them.

After the war, Smoky came home with Wynne, who married and eventually had nine children. Smoky was a valued member of his family. Wynne took Smoky to Hollywood for a time; he even traveled around the world with her, as she continued to entertain and cheer all who saw her. Smoky became a “service dog” for many veterans, helping them to heal both physically and emotionally.

Smoky was fully grown when she was found. Her age at her death, on February 21, 1957, was estimated to be 14-years-old. She is buried in the Cleveland Metroparks, Rocky River Reservation in Lakewood, Ohio, where a memorial to her now stands. William Wynne also memorialized her in a loving memoir, titled Yorkie Doodle Dandy.

As we hope every Veterans Day, if our stories of War Dogs move you, please adopt a rescue dog. There are dogs of all breeds waiting to find loving Forever Homes. It would be a fitting tribute to Smoky if other abandoned Yorkshire Terriers would be given love and shelter because of her. And Smoky is a great name. Please think about it and remember, “Adopt, don’t’ shop”.